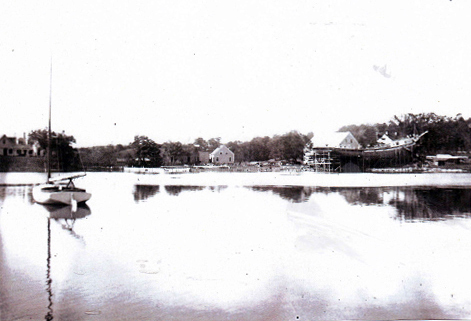 A view of the Damariscotta River near the home of Dr. Winslow. (Photo courtesy Newcastle Historical Society Museum)

Dr. Kenelm Winslow was the first physician in Newcastle, according to the Rev. David Quimby Cushman in his book, “The History of Ancient Sheepscot and Newcastle.” Winslow practiced here in 1763. His house was on the Newcastle side of the Damariscotta River, at a run of water, next to a rock in the bay. It was southward of Christopher Hopkins’ place. Winslow’s farm, near the Hon. E. Wilder Farley’s place, was later purchased by Col. George Barstow. The late Mrs. Barstow resided here for many years.

Dr. Winslow was active in town affairs. In 1755, he was elected first selectman for the town but seems to have held the office for only one year.

In 1759, Winslow was appointed a tithing man with William Kennedy. In May 1763, Joseph Glidden, a constable, issued a warrant calling a town meeting, for the choice of three jurors for the next session of court. James Cargill was chosen grand juror; and Samuel Nickels and Winslow were to serve on the jury of trials. This session was held at Falmouth as it was before Lincoln County was established in 1790.

In 1767, Winslow and Alexander Campbell were appointed to a committee to select a place for a pound on the eastern side of town, and ordered that it should be built “as highway work.” Pounds were very important in the early days, as many of the animals were allowed to roam free. It was more common to fence in a garden then to fence in animals as roaming animals would get much of their food while running free. The pound was not built. So the next year it was voted to build the pound at the most convenient place to accommodate the people and “handy to water.” Cushman never wrote whether it was finally built.

Cushman is evasive on Winslow’s career. He writes that Winslow received his title from his skill in curing horses and cattle. He sometimes tried his hand upon sick people and with good success. In 1768 he charged the town 4s for two visits to Phebe Chick in her illness.

Here is a prescription for a sick person. Cushman does not say it was Winslow’s prescription but he writes, “If anyone can at this day be benefited by it, they shall be welcome to this insertion.” The prescription reads, “An ounce of the syrup of Marsh Mallows, and half an ounce of the oil of Sweet Almonds, (fresh drawn) mix them, and take half an ounce at a time when bad. Let them be well mixed by shaking them well together, just before you take. Let it be taken warm.”

Winslow’s house was near the Garrison in Farley’s field. One day when the men had gone across the river to do some work and the women had left to perform some labor in the field, some Native Americans crept up and a fight ensued. Several lives were lost but the Native Americans escaped unhurt. It was about this time and may have been this occasion that Winslow was taken and carried to Loud’s Island where he was killed.