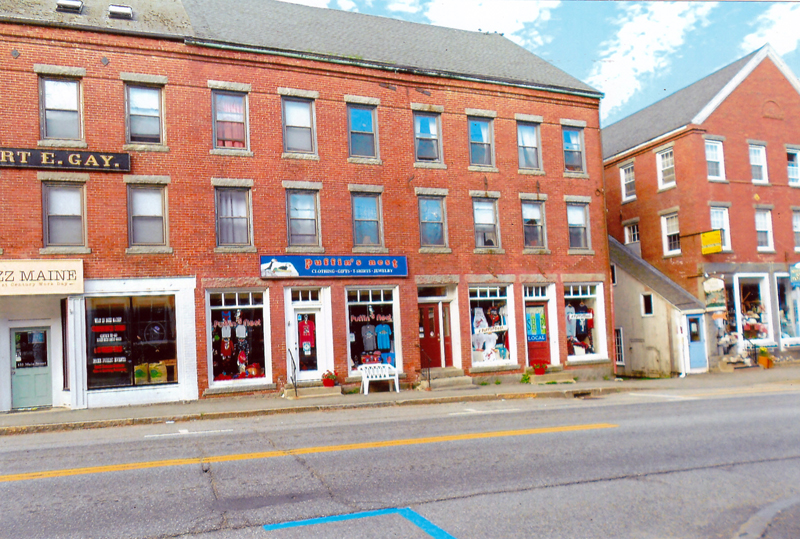 Main Street, Damariscotta, where Bill and Lida Kool had their gift shop. It is now the home of the Puffin’s Nest. (Photo courtesy of Arlene Cole)

Recently, I came across an article written by Janet Ann Clement for The Lincoln County News on Oct. 2, 1993. It was the story of how a family was able to come from The Netherlands to enjoy life here. Wilhelmus and Lida Kool came to the United States in the hope of finding a better way of life for themselves and their son. George and Josephine Hart of Newcastle acted as their sponsors. When the Kools came to America in 1961, they stayed with the Harts on Glidden Street for a time to get oriented. Their son attended Franklin School, here. Sadly he was, later, killed in an automobile accident.

I knew the Kools when they ran the Pine Tree Variety Store. They bought our line of wooden toys and crafts for their gift shop there. They imported paintings to sell along with local gifts. I remember well when we first sold to them, I would go in with an order and they would be talking to each other in their original language. When he saw me, he would switch to English.

I have copied the article as it was printed [brackets are my additions]:

Up until this August, Wilhelmus [communally known as Bill] Kool said he was always too busy to go down to Portland to take the test to become an American citizen.

“But after more than 30 years, I thought it was about time,” said the Alna resident who left Delft, Holland, in The Netherlands for America May 16, 1961, with his wife Lida.

He has now lived in Alna for 22 years and has been retired for the last 10.

“It proves it is possible to do this in America if you are willing to work. Don’t let anyone tell you different,” he said.

He believes Americans take a lot for granted as they don’t have anything to compare their way of life with.

“During the war, Americans were worried about getting gas while we were worried about eating,” he said. “I survived half a year on sugar beets and when I came here and saw what people threw away, it brought tears to my eyes,’ he said.

But he said he didn’t blame people for these attitudes as their experiences have been quite different than his.

He is proud of his new citizenship papers and passport. “In spite of some of the government’s stupidities, I think this is the greatest country in the whole wide world,” said Kool.

He recalls that in the 1940s when a bomb fell 120 feet from his house, he volunteered for The Netherlands Marines and served in Indonesia, behind a machine gun and his books came from a correspondence course.

When he returned home, he and a friend started up a small bike and mo-ped manufacturing company, but he said because he did not have a diploma, that the country would not let him be in business for himself.

At that point he said, “I am going to a free country.”

He had tickets for Australia in his pocket when he learned that his brother-in-law in America had found a sponsor for him – the George Harts on Glidden Street in Newcastle.

“They were very good to us. They let us work for them for a year so we could learn the language and then we went off on our own,” said Kool.

At first he was in the painting and art works from Germany, Austria, Belgium and other countries.

He also owned the Pine Tree Variety Store in Damariscotta, a gift store. For about a half dozen years he and his wife ran the Alna Store. When he first took it over, it was just a leaking hut. The two built it up to a place where the townspeople enjoyed gathering to socialize.

Today he sits at his kitchen table while his wife makes apple sauce and watches the birds that come to the many feeders they have in the yard, and thumbs through a bird book identifying them – purple finches, woodpeckers, nuthatches. Over the top of one feeder are the words, “Lida’s Diner.” He also had a condominium for the bluebirds, and swallows nest in his barn.

Lida, who did not pass the oral exam in August, is boning up for the next exam in November. Her husband quizzes her: [Bill could speak English quite well but Lida was more retiring and was still unsure of the right words when talking to outsiders. I suspect that may have been the reason she failed the exam.]

“Who said ‘Give me liberty or death?’”

“In what document is freedom of speech granted?”

“Who wrote the ‘Star Spangled Banner?’”

“What did the Emancipation Proclamation do?”

After Kool received his papers, along with the others, the two went out to celebrate at a Chinese restaurant. Another celebration is planned when Lida receives hers.