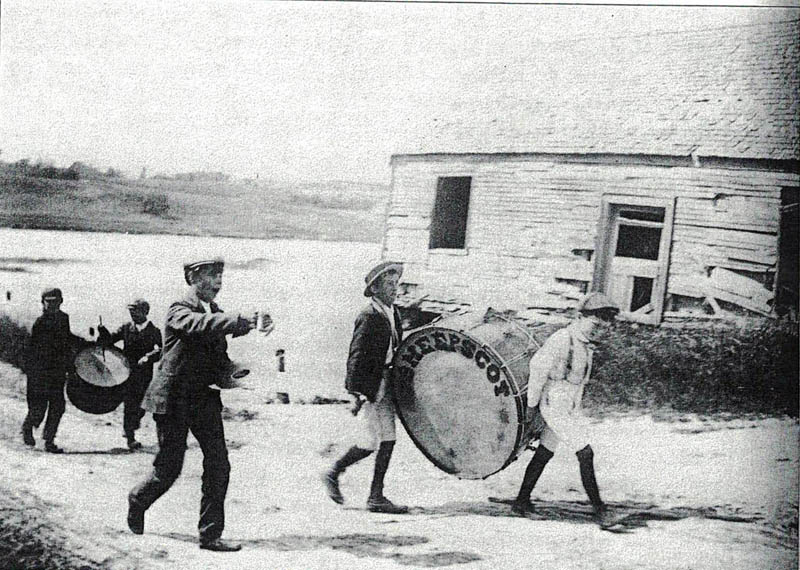 Newcastle has been blessed with pictures. Besides the many thousands of photos taken by Ivan Flye and the old pictures of the area he bought at his Pictorial Studio in center Newcastle from about 1945 to 1985 there are the more than 3000 glass negatives of this area that were taken by E. Joseph Leighton between 1900 and 1930.

Joseph, known as Trinket Joe was born in 1884. Some records say he was born in Decatur, Ill., some say in Sheepscot. By the time he was 16 and living in Sheepscot, he was an itinerant photographer, carting his large view camera on a tripod wherever he could find something to take a picture of. It is said he walked or hitched a ride on the narrow gauge railroad.

I came across a couple of articles printed in The Lincoln County News in the summer of 2000. One was by Lucy Martin and the other had lost its writer’s name. These told of this professional photographer who took a range of photographs of commercial groups, clubs, school graduations, fraternal organizations, churches and countryside. Trinket Joe would travel about and take his pictures. There never was any doubt he was doing it to make a living and he apparently made out well. Today we look at the old pictures trying to get a better idea of the world of 1900. Of course the people have changed but many of the scenes he took look familiar today.

Trinket Joe worked from glass plates which he took home and processed into photos he could make into articles, like pillow tops, picture postcards and other novelties and prints. He then returned to the area where he had taken the original, to sell these items to his happy customers. Glass plates were becoming popular in the early 1900s when George Eastman perfected the process. Trinket Joe had to carry these fragile pieces wherever he went and be careful not to break them as he traveled. He does not appear to have traveled by horse and cart. His progress must have been slow and awkward.

The articles tell that he had pictures taken in 1910 when Haggett’s Garage in Wiscasset was under construction. Many of his pictures give much detail. In a photo showing a parade of uniformed men on Main Street in Wiscasset, a sign can be seen advertising ‘Lincoln County sherbet and ice cream’.

But he did not limit himself to villages. School children would stand outside their one room schools to pose or take part in games outside in the school yard. Families, dressed in their best, would pose in front of their homes on the farms with their family pets and even some of their farm animals. He traveled to fairs and took pictures of what was there.

His pictures were taken of the way things were. He would take pictures of domestic scenes, arching elm trees, bridge spans, apple picking and any current event that was taking place. One picture he took is called Haying at Two River Farm, Dyer’s Neck. It shows the heavily loaded hayrack with the adjoining activities. A copy of it has been enlarged and framed and is hanging in the Newcastle Town Office. Another, from a book, shown here, is of a Sheepscot parade coming off the bridge at Sheepscot.

His pictures reflect the rural open region, especially around Newcastle, Alna and Whitefield. We are still a rural area. He also visited logging camps. In one of his photos a wall of logs cascades down the river. In another, work horses, oxen, men and a woman astride are posing for the camera beside a trailer sporting a crooked, primitive stovepipe.

Talk was that he even had risque post cards he sold “under the table” when he went to logging camps and local fairs.

Trinket Joe married but had no children. He did have a family. He had, at least, two siblings. Marjorie Huntley’s mother Estelle was his sister and Doris Leighton Pierce’s father Thomas was his brother. He lived at least a part of his life on the West Alna Road. He seems to have stopped taking pictures after 1930. Was this because a new process in filming, the celluloid negative was introduced, or was his health declining. He died in 1957 in an Augusta nursing home.