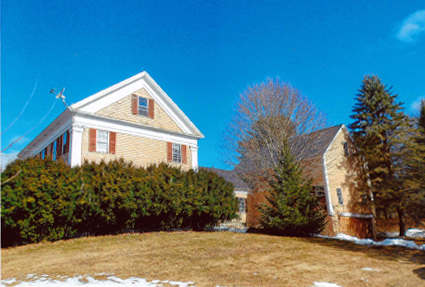 The Feb. 23 issue of The Lincoln County News reported that the Newcastle Planning Board had approved an application for Mobius Inc. to convert the house and barn at 21 Academy Hill Road into apartments for its clients. The condition of the house was given as being in “significant disrepair.” They plan to make extensive repairs. It is always good to see one of our old landmarks being refurbished. As we all know, this house is on the oldest road out of Newcastle village, on the Hussey strip.

John Hussey Sr. was born in Scituate, Mass. and came early to Newcastle, where he married Jane Rollins, according to the Rev. David Quimby Cushman in his book “The History of Ancient Sheepscot and Newcastle.” Hussey bought land in the center of Newcastle village. On the 1816 priority settlers map, the land from the bridge up Academy Hill is part of this Hussey strip.

Hussey’s grandson, Capt. John Hussey, sold a small strip of land on the river to John Turnbull. Turnbull ran a ferry there, which ran across from what is now Damariscotta to the Newcastle shore. This spurred the growth of the village. The first road out of Newcastle ran up the hill to the Hopkins Hill-Academy Hill ridge. There it diverged north to Damariscotta Mills, west to Sheepscot, and south to Edgecomb and Boothbay. It was known as Hussey’s Corner. The Mobius house is one of the early houses built along this road.

When I first came to Newcastle nearly 75 years ago, Lida Chandler, the widow of John S. Chandler, lived there. Her adult son Charles (Charlie) lived with her, and Merton and Mildred Staples rented the rooms upstairs. Lida’s name is spelled “Lida” on the town tax list but is spelled “Lydia” on her gravestone.

The Chandler family was not an old name in Newcastle. According to Christine Dodge’s records, the Rev. Benjamin Chandler came to Newcastle from Vermont. His son, George, was John’s father. John was born in 1861 and died in Newcastle in 1935. He was 10 years older than Lida, whose maiden name was Knight.

John S. Chandler bought the house in June 1919 from the Gould Bailey heirs. Bailey had died in 1913. His widow, Ellen Hilton Bailey, had died in 1914. Already the lot had been in the wrong place at the wrong time. When the Knox-Lincoln Railroad came through Newcastle in the late 1800s, the Gould Bailey lot on Academy Hill was in its projected path. The railroad bought a section on the west side of the property. John S. Chandler was deeded the right to have a farm crossing across the railroad land to his back land. When Gould Bailey heirs sold the lot and buildings to John S. Chandler, the deed stated the Chandlers’ lot was 10 acres of land. The house, then, was in line with the other houses along the road, with just a small lawn and sidewalk.

In 1960, when Route 1 was rebuilt through Newcastle, widow Lida Chandler’s land and house were again in the direct path of land taken by eminent domain to build the bypass. Several houses next to hers were torn down to make room for the bypass. Lida Chandler did not want to have her house destroyed. She had the 10 acres, so the state moved her house and barn into her backyard. Another house was also moved across the road to a new location near the railroad tracks. A new road was made to the railroad station.

Today, Lida Chandler’s house and barn sit alone in the field away from the road. My articles on pages 390–398 in my book “History Tales of Newcastle, Maine” give the details on how, in the building of the overpass over Academy Hill Road, the state tore down and moved houses along Academy Hill Road.

Lida Chandler died in 1964, nearly 30 years after her husband’s death. She is buried in Glidden Cemetery next to him. She was 93 years old. She will be remembered as being the organist at the Second Congregational Church for many years.

Her house was sold to Robert Fitsgerald, who used it as a summer vacation home. He owned it for 50 years but he never became a resident of Newcastle. He was recognized locally as one of the people from away as he moved through the villages. He is remembered by those at Pictorial Studio in Newcastle as a customer who came often to get pictures for his art.

Huston attended Wentworth Institute and served in the U.S. Army in Europe during World War II. Huston came back to the area to live. His interest was in history: houses, records, people. The last time he stopped at the museum, he had a woman companion who drove for him and helped him to a chair at our photograph table. His body was feeble, but once he got settled in a chair, it was obvious his mind was clear. He talked, with enthusiasm, on all the pictures we showed him. He said he would be back, but he never made it. He passed away on Jan. 30, 2017, a few months before his 100th birthday.

After his mother’s death in 1982, Huston lived at the family house on Bristol Road. Thus, it was assumed that when he and Joel bought the Chandler-Fitsgerald place, it was for Joel. Joel moved in with a friend. As a business, Joel takes down old houses in the area. When he dismantled the Dyer’s Valley Grange Hall, he gave their old secretary records to the museum.

Perhaps to work up an appetite, the two fellows could be seen each morning as they walked down the street from their house to get their breakfast. If we were open at the museum, they might stop for a brief time. A “for sale” sign appeared on Joel’s house and when I spoke with him he said he had moved in with his father. I still think of him as Joel, but he has legally changed his name to Damian Clarence Chapman.

Bolster Builders Inc. are working on the old Chandler house’s renovations. Mobius is a word that refers to the Mobius strip. This image denotes the infinite potential of the people the agency serves. The name had been familiar in the Newcastle area for 30 years, as the agency has facilities in both Newcastle and Damariscotta. I stopped in at the old house recently to take a photograph. Renovations have already been started.

After 50 years, the old Chandler house is well adjusted to its new home back in the field away from Academy Hill Road traffic. It is on a small rise with trees and shrubbery, many of which have now been removed. It was a sunny warm day when I was there, and the old farmhouse with its ell and barn seemed to be quietly waiting to take on its new life.