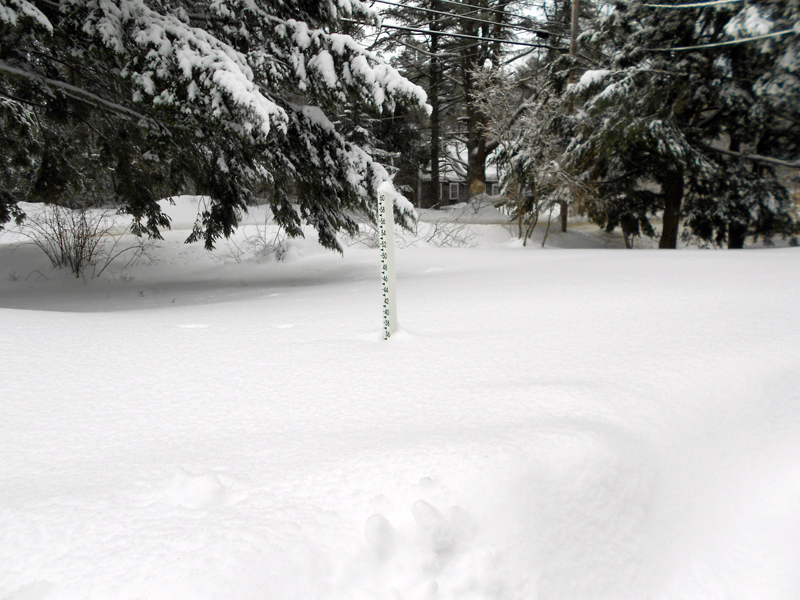 As Irving Berlin said it, in his “White Christmas,” “May all your Christmases be white.” Are all Christmases white here in Lincoln County? I thought I would look it up and see. As many of you know, I have a National Oceanic & Atmospheric Administration Station here at my home. I have the information I have collected over the years which will tell how many of the last 60 Dec. 25s have had snow on the ground to make them a white Christmas.

I have always been interested in the weather. I grew up on the farm where weather was very important. I remember my father, Elton McCurda, when he was starting out in the morning, would open the shed door, it faced east, and pause and study what he saw. We had weather reports on the radio and they were very helpful, especially for long-range forecasting, but he would stand for a moment and access the world in front of him before he stepped into it. In some cases, it would make a difference on what he saw as to what he would do for the day.

When, in February 1954, we returned from George’s Army duty I started making diary notes and included the weather. Nancy Rawlins, who lived on the Bunker Hill Road in Jefferson, was a recorder for NOAA weather and her information was, also, published each week in The Lincoln County News. I would copy her temperatures.

And then she stopped. No more weather information. An effort was made to keep the report active at the paper, but it was rather haphazard. I went in to talk with editor Dorothy Roberts. (See my Article 195 on The Lincoln County Publishing Co. in my latest book). I showed her what I had daily and she took me on as a correspondent at once. I was to call in every Wednesday morning at 8 a.m. with my weekly weather information. I have been doing it ever since. I have not missed many Wednesdays.

Nancy Rawlins died in 1965 and her husband, Charles (Chuck) Rawlins, recommended me to NOAA. They accepted me. On May 12, 1965, a weather bureau fellow came down from Boston. At that time, they did not have a unit in Maine. He set up the instruments on my side lawn that Nancy Rawlins had used.

Since they opened, I have operated under the NOAA unit in Gray, Maine. I can call there if I have trouble with my equipment and someone comes around to clean and check my instruments. You can find my weather information on #2, Climate and Past Weather, under Newcastle.

I check my station at 5 pm. When I first got my station, I had to go out to my thermometers in the cold dark evenings to read the temperature. But some years ago, a fellow came down from the station in Gray and set my thermometers up so I can read them from my kitchen counter.

Sometimes when it is snowing up a blizzard and the wind blowing around the corner of the house, I open the door and look out and wonder how I got myself into such a job! But I put on my tall boots, my jacket with a hood, my mittens, my measuring rule and flashlight, turn on my outside light and head out.

I don’t like the strong wind, but on a quiet early evening it is rather peaceful out there with the soft snow fluttering down. I have learned that I will remember where my boards are so I do not have to hunt for them when all the ground is one blanket of white.

I note the high and low temperatures of the day, what kind of precipitation, how much and at what times it occurred. I also record how much snow is currently on the ground. That is the project we are concerned with here. Each fall, in a place that will reflect average conditions, I put a white stake in the ground with the numbers, an inch apart, from 1 to 60. Of course, there are always bare spots or places where the snow has drifted. But as an average, by looking at that stake, I can tell at a glance how many inches of snow there is on the ground.

Maine weather is always changing. In 2002, we started Christmas Day with a trace. It started to snow after five and we had 15 inches new snow before it stopped snowing the next day. On the other way, in 1977 we had 2 inches of snow on the ground on the 24th but it rained Christmas day. There was just a trace left on the ground at 5 p.m.

And on 15 of those 60 years there was no snow on the ground here on Christmas Day. It was on Dec. 25, 1973, that we got our first Christmas snow-free day. There was another in 1979. But by 1990, the no snow days began occurring quite often. To me, this shows a warming trend. I have not done any checking on changes in temperature. I did note that the coldest Christmas Day was in 1980 when it got down to -14 degrees.

It is also interesting to note that on Christmas Day 1970, the snow was deep. We had 36 inches of snow on the ground. (See my snow stake with the 36-inch mark plainly visible)

Will we have a white Christmas in 2021? We will soon know, and I will be recording it.