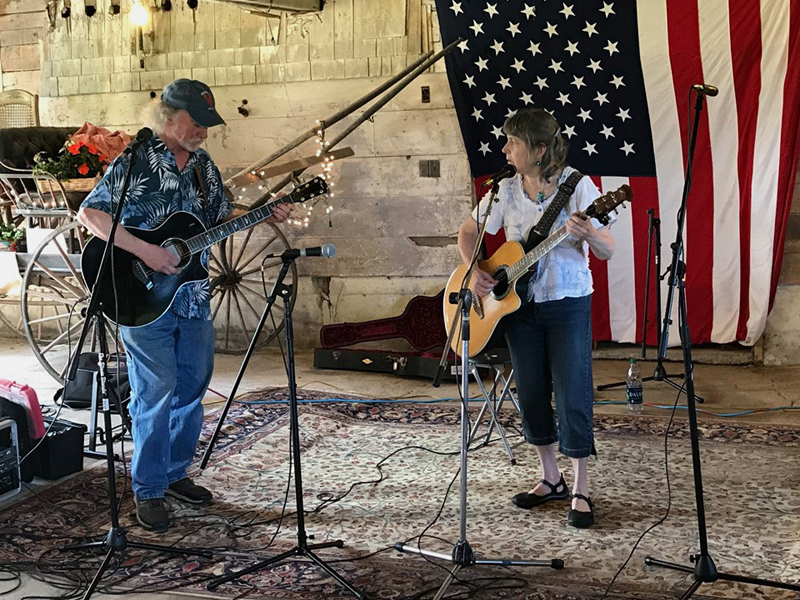 Have you ever heard of anyone searching for non-profits for which they could raise money? I was blessed to meet two such people this past weekend. On Saturday, the 15th, Inn Along the Way celebrated spring with an Open Mic fundraiser. It was full of sunshine, music, food, a potter, and some of the most giving, caring people I’ve ever run into.

These two people are helping Inn Along the Way meet their 10 million dollar goal one song at a time and one pot at a time.

Sylvia Tavares has been organizing open mic events for about the past four years. When she started organizing these events, she worked in concert with Grace Goldberg, owner of Savory Maine, a restaurant in Damariscotta. Tavares’ role was to contact non-profits to determine whether or not they would accept the proceeds. Not surprisingly, she was never denied.

Currently, she and her friend John Couch organize the open mics in the big red barn located on the historic Chapman Farm. All proceeds go to the fundraising efforts of Inn Along the Way.

For these events each act is given eight to ten minutes. There is usually a featured band which also performs. Inn Along the Way hopes to host two more open mics this year.

McCabe Coolidge donates the sales of his pottery to Inn Along the Way. Why? Coolidge first heard of the project when he attended a workshop on spirituality and hospice. That piqued his interest so he started researching the organization. He viewed the website and talked to people. He evidently liked what he learned. The pottery that McCabe makes is often sold with the idea that the profits will go to non-profit organizations that are in the start-up phase.

Inn Along the Way fit the bill.

The pottery wheel was running at full speed during the event on Saturday. Coolidge made many items that will be finished and then put up for sale at the Inn. He even made some items specifically to the request of attendees. This jewel of a man donates his pottery for other non-profits in other areas of the country as well.

He is currently an “artist in residence” at the Split Rock Art Center in Thomaston. He and his wife travel between Maine and their new home in North Carolina. Those of us who volunteer at Inn Along the Way are often advised to remember that relationship building is what it’s all about. One very important element for us to remember is that each individual matters and has gifts to share. These gifts are what makes life so interesting and support our goal of being a collaborative community. Inn Along the Way is fortunate to have both Tavares and Coolidge sharing their gifts with us.

(Inn Along the Way, innalongtheway.org, is a unique and innovative community design in which older adults will live interdependently in a neighborhood-style setting of small, environmentally friendly homes. The community is under construction at the 31-acre Chapman Farm in Damariscotta.)