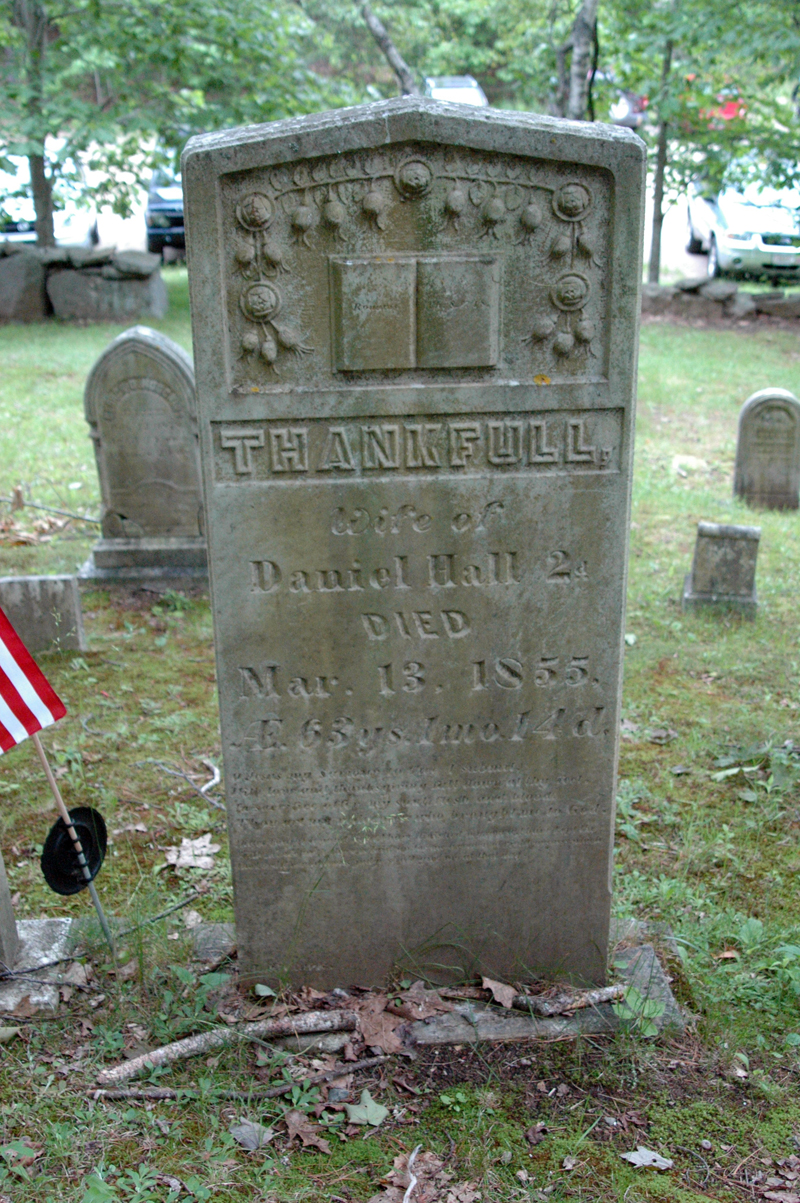 Many of our names have special meanings, and may (or may not) represent attributes or characteristics of that person. My own name of “George” implies either “a patron saint of England” or “relating to a farmer.” At least one of these is correct! My good wife’s name is “Myrtle,” which could be interpreted as “a clinging vine,” occasionally true.

Some of our Nobleboro ancestors chose very meaningful names that did not require a dictionary for interpretation. One of our favorites is that of a West Neck girl born in 1792 whose name was “Thankful.” She was the daughter of early settler Frederick Hatch, who came to Maine in 1779 from Marshfield, Mass., with transportation on board the sloop Hazard. He served in the Revolutionary War, being involved in the expedition on the Penobscot, otherwise known as the battle of Bagaduce (at Castine). He was taken prisoner in this ill-fated expedition, but escaped and settled on West Neck, where he acquired 200 acres of land (as shown on the 1813 town map). He lived until 1854, to age 95; and his wife, Lydia Bryant, lived to 91 years of age. They had 10 children of whom Thankful was the fifth. Evidently they had much for which to be Thankful!

Thankful Hatch was married in 1807 to Daniel Hall, the second, and they also lived on West Neck. He built the house where Mrs. W. J. Robinson now resides (Editor’s note: in 1977). Daniel and Thankful also had 10 children, one of whom was Alden Hall. Alden married Harriet Hall, and they had nine children, all born in this same house! (The 1857 county map shows the location of the house as belonging to Alden Hall.) Alden is renowned as the expert carpenter who rebuilt the First Baptist Meeting House in 1854-55 at a cost of $4,598.

This cost was to be repaid by the sale of the pews, which were auctioned off for “choice,” which was an added cost to their “prisal value.” For example, Daniel Hall, third, on East Neck, paid a total of $107 for his pew, including $85 prisal and $22 choice. The layout of these pews, their cost, and ownership are included in the old church records. Unfortunately, several pews remained unsold, and several years later a church committee figured out a balance of $296.44 unpaid, which was still due Mr. Hall. His great-grandson, Ansel Creamer, now living in Nobleboro, reports that he was advised to never undertake construction and financing of a church – an admonition which Ansel has observed!

Alden’s mother, Thankful Hatch Hall, must have been proud and “thankful” to have lived until 1855 to see the new meeting house constructed by her son. The church now has Alden Hall’s religious books, including “The Psalmist – Supplement 1843,” and his “Holy Bible,” 1864, both inscribed as belonging to “Alden Hall, Pew 18.” These books were the gift of his granddaughter, Margaret Hall Creamer.

The burial grounds for Thankful Hatch Hall, her parents, her husband, and famed son, Alden, are in the Hatch Cemetery at Camp Kieve. Note the picture of the stone for Thankful.

An even more eye-catching name than “Thankful” was that of an early relative of the Hall family, whose name was Hatevil Hall. He was the son of Deacon John Hall and was the first of five generations of Hatevil Halls. Hatevil Jr. moved from Dover, N.H., to Falmouth, and his daughter, Abgail, was subsequently the grandmother of Neal Dow, the famed Prohibition leader who lived in Portland and was a colonel in the Civil War and mayor of Portland.

Deacon John Hall, the father of Hatevil Sr., was the great-great-great-great-grandfather of Alden Hall. The old deacon must rest in peace, having been the progenitor of five Hatevils, a Prohibition leader, and the financier-builder of the First Baptist Church of Nobleboro.

Another name of pious connotation was that of Christiana, which was given two girls, one a Hall and the other a Mills, who married Richard Tobin. Tobin was born in Ireland in 1795, but came to Nobleboro and settled on Lower Cross Road. He and Christiana are buried in the beautiful Trask Cemetery, not far from their home place.

A similar name is that of “Christopher.” This has been used by a Hatch family of old Bristol, and for Christopher Hopkins of West Neck, a Revolutionary War veteran.

A more commonly used name has been that of “Hannah.” This is a variation of the name Ann, Anne, or Anna, and implies “grace.” Many, many are the ladies of Nobleboro who have borne this gracious name, including the families of Benner, Chapman, Coombs, Flagg, Hall, Hatch, Moody, Oliver, Sidelinger, Trask, Winslow, York, and others. The name “Hannah” also is intriguing because it is one of the very few names that can be spelled correctly both forward and backward!