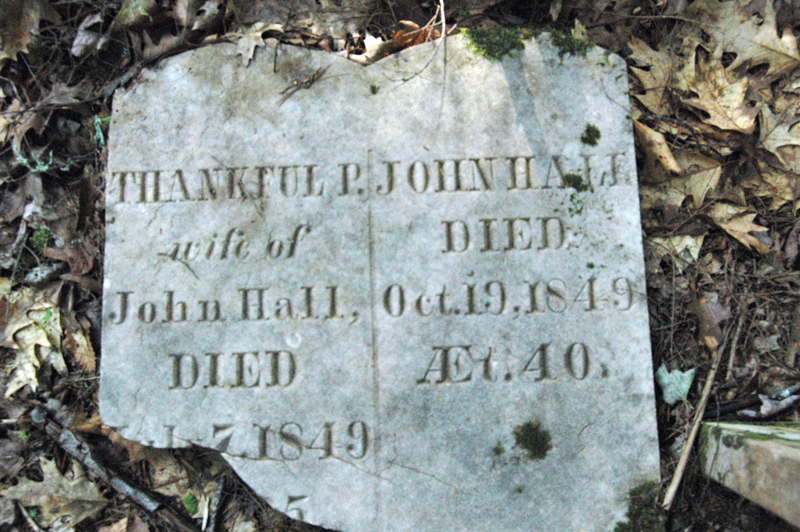 The headstone of Thankful P. and John Hall in GR-117 off East Neck Road, Nobleboro, before it was repaired in 2018. (Laurie McBurnie photo)

Surely an interesting name for a lady was that of “Silence” – Silence Oliver. We do not know her maiden name, but her husband, Jonathan Oliver Sr. was an early settler on East Neck, and served in the Revolutionary War. He enlisted on Dec. 31, 1765, and served until January 1777, when he was discharged at Peak’s Hill, N.Y. He served in Reed’s Co., Bailey’s Massachusetts Continental Line. He lived until 1837, to age 87, and is buried in the Oliver cemetery near the junction of East Neck Road and Vannah (formerly Butter and Egg) Road, on the old Oliver homestead.

Jonathan and Silence had a granddaughter, born in 1804, who also was named Silence Oliver, after her grandmother. She married Horace Hall and they had nine children. Two of their great-grandchildren lived in Nobleboro in 1977 – Miss Mabel Sidelinger and Fred Willis Hall; and a third one, Betty Wilson Tukey, lives in Damariscotta. As a mother of nine children, and having many descendents, Silence Oliver Hall obviously should not have been expected to live up to her name. It has been further reported that her name was not a handicap to her in this respect!

Another special name is that of Angeletta, which has a sweet angelic connotation. Angeletta Hall was born in 1837, the daughter of Deacon Daniel Hall, 3’d, and Abigail Hatch. She was the seventh of their eight children who were born in the house on East Neck where Elizabeth Beston lived in 1977. The location of Daniel Hall’s home and shoe shop are shown on the 1857 county map.

It would seem that Angeletta’s name was well chosen. She was not only the daughter of a deacon, but she married Deacon Lorenzo Dunbar, who for many years played the organ and was otherwise active in the First Baptist Church of Nobleboro. Angeletta and Lorenzo lived on the old Jesse Dunbar homestead on East Neck. This old house, built in 1797, was occupied in 1977 by Elizabeth and Philip Briggs; and the barn across the road has been beautifully remodeled as the home of Robert E. and Sally Dunbar and their two children. This Robert E. is the great-grandson of Angeletta, and served Nobleboro as its first selectman in 1977.

It is also interesting to note that Deacon Lorenzo Dunbar (husband of Angeletta) had an older sister named Angeline. He also had two brothers, Albert and Melzar Dunbar, who became preachers, being duly approved by the First Baptist Church of Nobleboro. Old church records for 1837 report the vote “that Brother Albert Dunbar have liberty to improve his Gift when and where God in his providence shall call him.” Similar approval was given his brother Melzar in 1838. 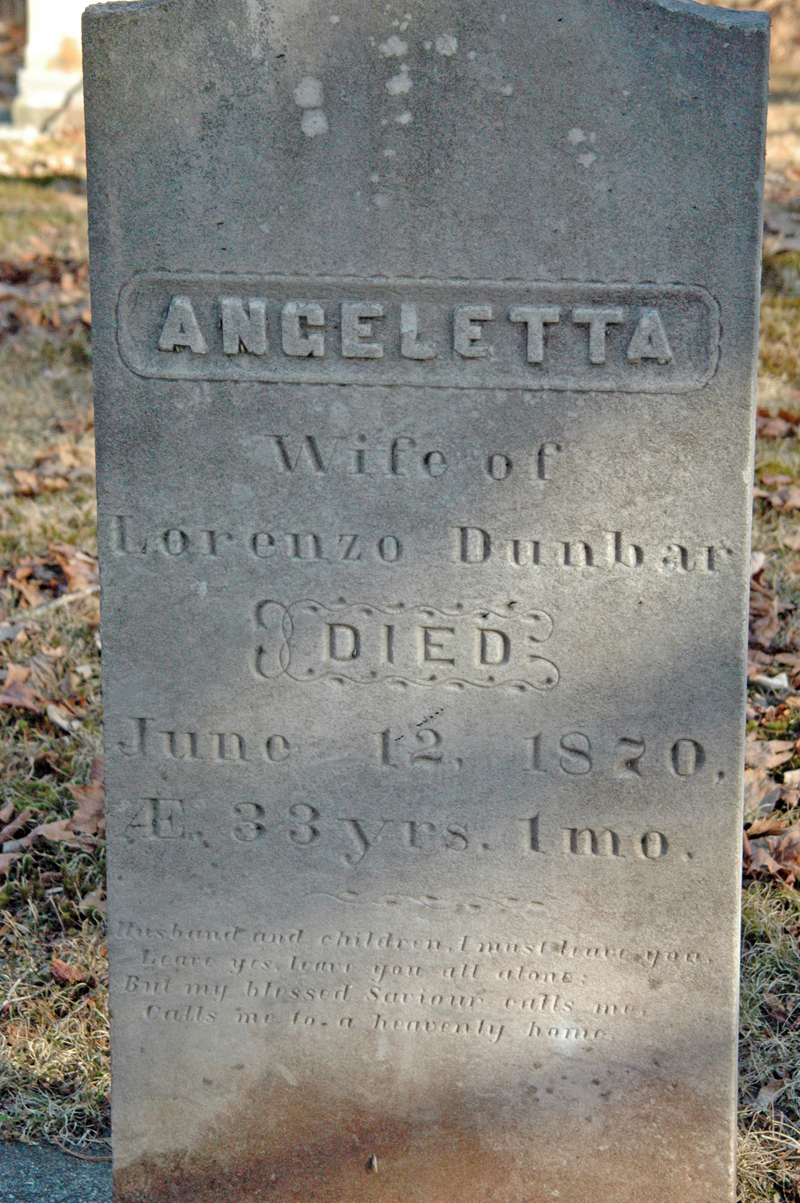 We would be remiss if we did not mention that Angeletta’s mother, Abigail Hatch, was a younger sister of Thankful Hatch. We are indeed thankful for all the angelic influences of the Hatch, Hall, and Dunbar families, as they have influenced, for the better, our Nobleboro heritage.

Experience is another name found in the Hatch family records. Experience Hatch, born in 1779, married Capt. Richard Hiscock (or Hitchcock), of Bristol, and they lived in Damariscotta. Her father was Major Elisha Hatch who came to Maine during 1770-75, was married three times, and as a blacksmith did iron work on the first vessel built on the Damariscotta River for George Barstow. Experience was the seventh of Elisha’s 10 children. He also had a son named “Prince” – another potential name.

Another “Experience” was Experience Whitehouse of Jefferson, who married John Hall, 2’d of West Neck in 1799. This John was the son of “Grandfather” John Hall, who was a Revolutionary soldier, and settled on West Neck after the war. He was a recognized leader among the group of settlers who opposed the confiscation of their farms by Noble and Vaughan. His farm was a test case, and his name is mentioned as one of the mob of local men who, on horseback, drove back the surveyor authorized by the Commonwealth of Massachusetts, to survey their lands. This large area was included in an old Indian deed to Brown, and later acquired by William Vaughan. This is a most exciting story – for another time!

We also like the name of Patience, given to the daughter of Seth Hall Sr. who was an early settler in Nobleboro. He lived on the “Old County Road” near where Dr. Joseph Griffin and family lived in 1977, close to the Waldoboro town line. Patience was the eighth of 12 children. Surely much patience must have been required in such a large family! This Patience married Amasa Bryant of East Neck, and they are buried in what is now a wooded area east of the house where John and Dorothy Chapman lived in 1977. In this burial ground there is also a large double stone for John Hall and his wife Thankful Patience Hall. They both died in 1849 at the ages of 40 and 35, reportedly from diphtheria (or small pox). Even the combined name of Thankful Patience was inadequate protection against these contagious diseases.

We will now close this write-up in a somewhat nonsensical manner, quoting a poem, entitled “That Cow.” This poem is a take-off on old Waldoboro surnames that partially applies to Nobleboro. The source of this fanciful rhyme was an old scrapbook of clippings, dated about 1890, in the possession of Harold T. Coombs.

In Waldoboro, long ago,

A local wit said he could show

That from the names of men in town,

Possessed of more or less renown,

A perfect cow could be created –

Her parts constructed, matched and mated.

He claimed too much, at least by half,

But failed (and we will show you how)

To build, as he had claimed, a cow.

That she must have a pair of Sides

To hold her daily grain and hay,

And these he found without delay.

And then, ‘tis said, he used the Schencks,

As then pronounced, and made the Shanks.

Of names for feet he had enough

And gave to every shank a Huff,

And thus equipped with standing pegs

He had the cow safe on her legs.

Then to the front he went, ‘tis said,

And found among the Heads a Head,

He placed on either side a Horn.

To save the head and horns from wreck,

He broke the rule, and took Dutch Neck.

The vital parts are not complete

Without three kinds of harslet meat;

The heart and liver lost their rights,

But George and John were found for Lights.

Whatever else a cow may lack,

In summer-time she needs a back;

And having this would not avail

To fight the flies, without a tail.

Finding no spine to fill its station,

He said we’ll have the elongation,

And went across the line to find

The German name of Umberhind;

A good old name for common use,

‘Twas desecrate the name or fail,

So Onbehind was used for tail.

Two of our early Nobleboro families were Isaac and William Umberhind, who lived on East Pond Road. Their homes were just north of the Umberhind Railroad Crossing, where the Ridleys and Cousins lived in 1977. Two of William Umberhind’s granddaughters are Laila Umberhind Howell who lived with her son and family in North Nobleboro in 1977, and Verna Umberhind Little who resided in Damariscotta, but frequently visits her sister Laila.

There are other appropriate Nobleboro names that could be listed, but we will bring this tale to an end – with Umberhind.