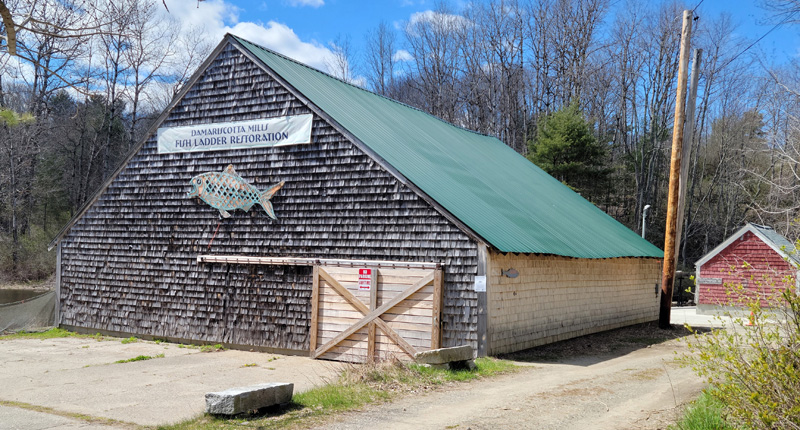 (The 2022 alewives are on their way. Visit damariscottamills.org for the latest updates. Also note that this article was written long before the recent restoration project of the fish ladder.)

Damariscotta Mills alewives have been a major boon to our towns of Nobleboro and Newcastle. In 1977, the total fishery catch was 10,211 bushels, with an income of $28,284. Each town received a net income, after paying expenses, of $12,000. In the previous year, the catch was even higher at 14,772 bushels. With 1978 high prices for alewives for lobster bait, the potential income could exceed that of a year ago.

Although alewives run each spring in a number of streams along the Maine coast, none of these streams can compare with that at Damariscotta Mills as to the number of fish harvested and the efficiency of mechanical harvesting. Our local fishery accounts for 28% of the total alewives taken in Maine over the past few years (1970s).

Credit for the financial success of our local fishery must be shared in many ways. First, of course, is nature’s gift of the rich resources of Damariscotta River and Damariscotta Lake. Credit also goes to James Kavanagh, nearby shipbuilder and merchant, who recognized the potential of these alewives and in the late 1700s made an initial attempt to develop a suitable passageway for the fish to ascend the steep falls to Damariscotta Lake.

The account of this early development has been found in the handwritten notebook kept by Miss Grace E. Cotton and Mrs. Ethel Cotton Lockery (now in the possession of Christine Lockery-Cummings of Bath).

We quote: “About 1729 or 1730, William Vaughan, a merchant of Portsmouth, came to Newcastle and built a double sawmill about where the power plant is now located. For the power used, he built a dam, the first ever located at the foot of the lake … then known as Vaughan’s Pond. For years thereafter … the alewives were barred from getting into the pond … (but) they continued their annual spring run up the river.

“But the elder Mr. Kavanagh, after he had come into possession of that property, one day in May, observing alewives in the stream below, had them taken in nets and transported to the pond above. He then directed his men to build a passage for them, so that they might ascend and descend at their pleasure. They did so, and the consequence has been a supply of fish in the stream ever since. Sometime after James Kavanagh had had his men construct a passage for the fish, he gave the adjoining towns of Newcastle and Nobleboro the right to his property for purpose of netting of alewives, setting aside, however, the passage he had built as a perpetual free stream for the fish.” 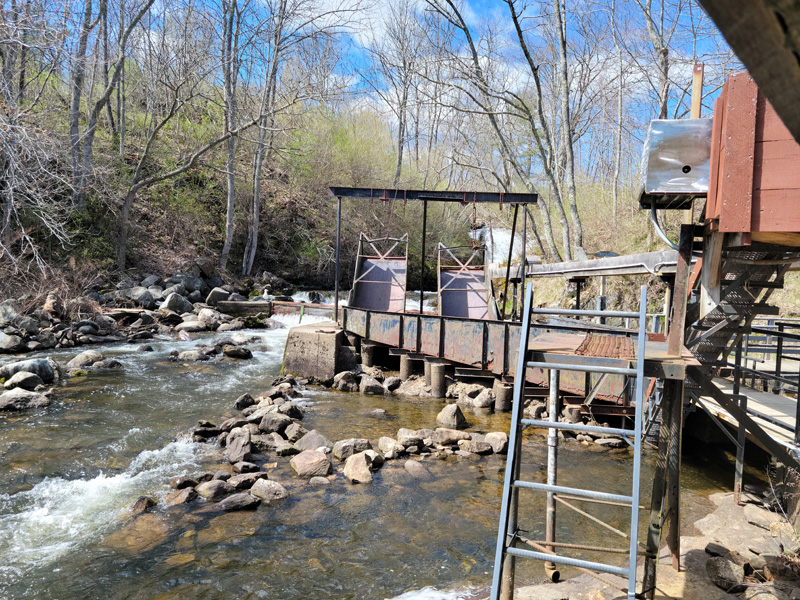 The present-day equipment used for harvesting alewives. Most of the harvest is sold for lobster bait. (Laurie McBurnie photo)

The above account probably exaggerates the extent to which Kavanagh developed the fishway. However, he apparently initiated the development and created an interest in the alewife potential that led the towns to improve the passageway. We have reviewed the town clerk’s minutes of Nobleboro town meetings and found the following actions taken to promote the fishway.

In April 1795, a committee of three was elected, consisting of John Perkins, Joseph Chapman, and Joseph Rust, to see the fishways are open at Damariscotta Mills. In each subsequent year a fish committee was chosen, and in 1803 the specific funding of $21 was voted to be laid out on the Rocks at the Mills. And then finally in 1807, two notable Nobleboro residents were chosen, John Perkins and Ephraim Rollins, to superintend the building of the fishway, after consulting with the town of Newcastle. In July 1807, the town of Nobleboro voted to raise $150 to defray expenses of the fishway; and in November an additional $100 was voted.

Ephraim Rollins was a most capable man, serving as selectman and town clerk of Nobleboro for over 30 years; was a representative to the- Massachusetts legislature from 1812-1817; was a Quartermaster in the Army for War of 1812; and was the expert surveyor who made the 1813 map of Nobleboro, including the boundary lines and acreage of each property owner. He lived from 1776 to 1830 and is buried in the Hall Cemetery off Morgan Hill Road.

Mr. Perkins was known as “Major” John Perkins and lived 1769 to 1818. He was a captain in the state militia. He is buried in the Perkins Cemetery on the west side of West Neck Road, a little south of Lower Cross Road. Buried here, along with Major John, are his wife Persis Hatch, their son Moses Perkins and his wife Sally Linscott, and their daughter Amanda A. Perkins. The home of Moses Perkins is shown on the 1857 county map, on the east side of West Neck Road, across the road from this cemetery. This is a beautiful burial ground surrounded by its own stonewall, built by these Perkins ancestors.

Perkins and Rollins evidently were successful in their town-approved endeavor, and by 1809 the fishway was complete. The Newcastle town records reported in 1809 that the sluiceway for fish had been built at Damariscotta Mills, with Nobleboro paying one half the cost, with the whole cost being $438. Reference to this record is on page 242 of “The History of Ancient Sheepscot and Newcastle,” by The Rev. David Quimby Cushman, published in 1882. A copy of this book is available in the Skidompha Library. 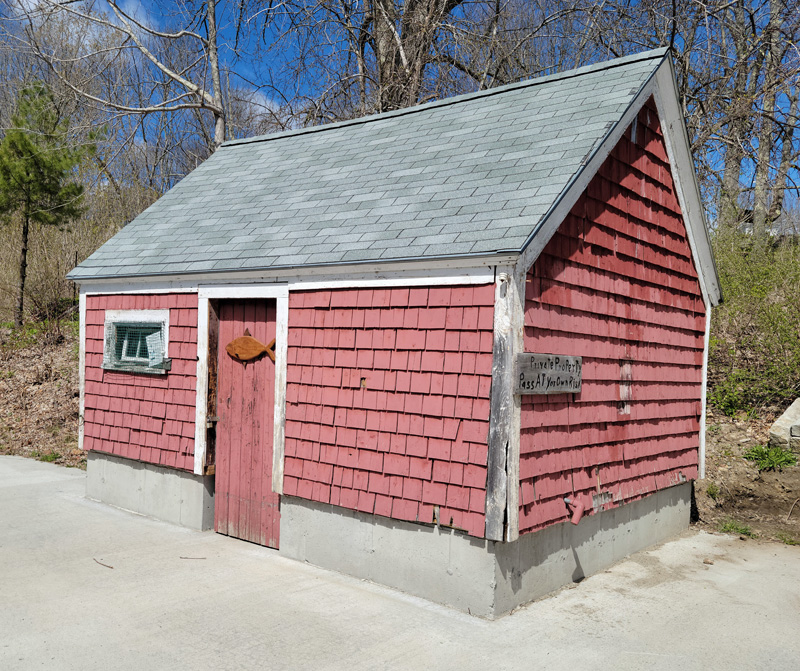 This small building is the Check Office where the folks buying alewives paid their bill, for which they received a receipt, which apparently was called a check. The building also probably served as a hangout for the harvest crew, a place to escape the rain, sun, cold, heat, bugs, or whatever else was outside that door. (Information courtesy Mark Becker, Laurie McBurnie photo)

This fishway was further improved in 1818 when the town of Nobleboro voted for the selectmen to expend $150 for rebuilding the fishway, presumably with Newcastle expending a similar amount.

This successful fishway for passage of the alewives has been known by various names, including New River, Locke Stream, Sacred Stream (no fishing permitted there), and Eastern Stream. We pay tribute to our ancestors who developed this stream with its numerous locks or pools, marvelously constructed of native stones, where the alewives can rest briefly before charging upward again through fast flowing water to the next pool. What an accomplishment by man and fish!

The alewives, when they emerge triumphantly into the peaceful water of “Little Pond,” have ascended a vertical distance of 42 feet from salt to fresh water. This is truly the survival of the fittest. Only the strongest fish can make it to then swim under the bridge into Damariscotta Lake to propagate the vast number of baby alewives that will grow to maturity in another four to five years to ensure the continued success of our local fishery.

Much credit for the efficient operation of our alewife harvest goes to Nelson C. Hancock who developed the original mechanical equipment to replace hand dipping; tested it, and improved its operations over many years while he was connected with the alewife harvest. That is yet another story which we will cover in some future article.

Finally, credit is due those foresighted legislatures which enacted the necessary laws and regulations to protect the alewives during their ascent up the river and falls to their spawning ground in the lake; and their descent in late summer, back down to salt water. Some of these regulations, dating back to 1741, will be discussed in a future article.

In the meantime, rejoice in Mother Nature’s gift to us, and the foresight of our early settlers in promoting our local alewife industry at Damariscotta Mills.