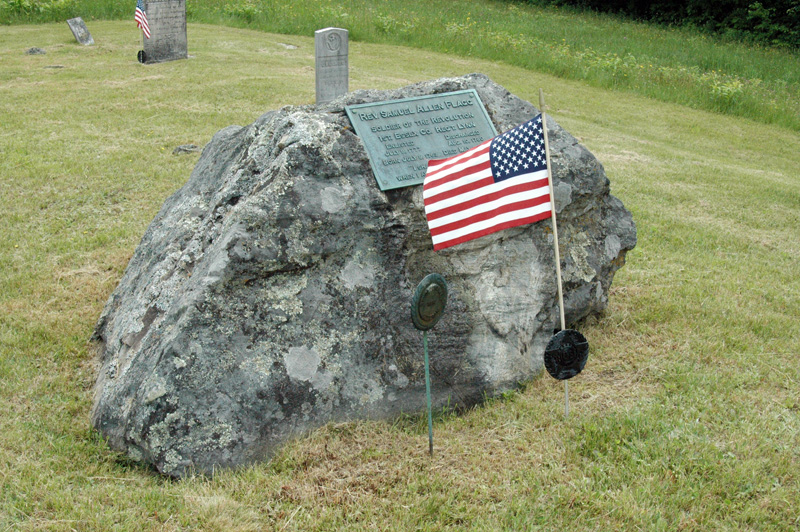 This boulder marks the burial of Rev. Samuel Allen Flagg, a Massachusetts native who settled in Nobleboro on land given him in payment for his service during the Revolutionary War. The boulder originally sat next to the nearby stream and was a favorite seat for Samuel when he was fishing. (Laurie McBurnie photo)

Nobleboro men had an active part in the Revolutionary War and special events that led to our country’s independence. Thus, when we celebrate July Fourth, let it mean more than a day off with a picnic and the evening fireworks at Damariscotta. This is Independence Day!

It was on July 4, 1776 the Second Continental Congress voted “that these United Colonies are, and of right ought to be, free and independent states.” However, many stirring events led up to this Declaration of Independence. Then five more years followed of Revolutionary War efforts, which involved suffering, privation, hardships, uncertainties, and financial stress before the colonies won their freedom.

In these early times, Maine was a province of the Commonwealth of Massachusetts, and Boston was a hot bed of rebellion against the Crown and the 1765 Stamp Act passed by Parliament. Mobs were organized under the name of Sons of Liberty, and rioting occurred in Boston and elsewhere, forcing the stamp distributor to resign.

These enforcement problems caused the Stamp Act to be repealed, but a tax on imported tea was imposed in 1770 that resulted in further resentment and popular uprisings in the colonies. Boston again showed its nettle by throwing overboard 340 chests of English tea, on Dec. 16, 1773.

The First Continental Congress was then organized, and conflict with England seemed inevitable. The colonies proceeded to organize local volunteer militia companies, in which undoubtedly some of our Nobleboro ancestors participated. 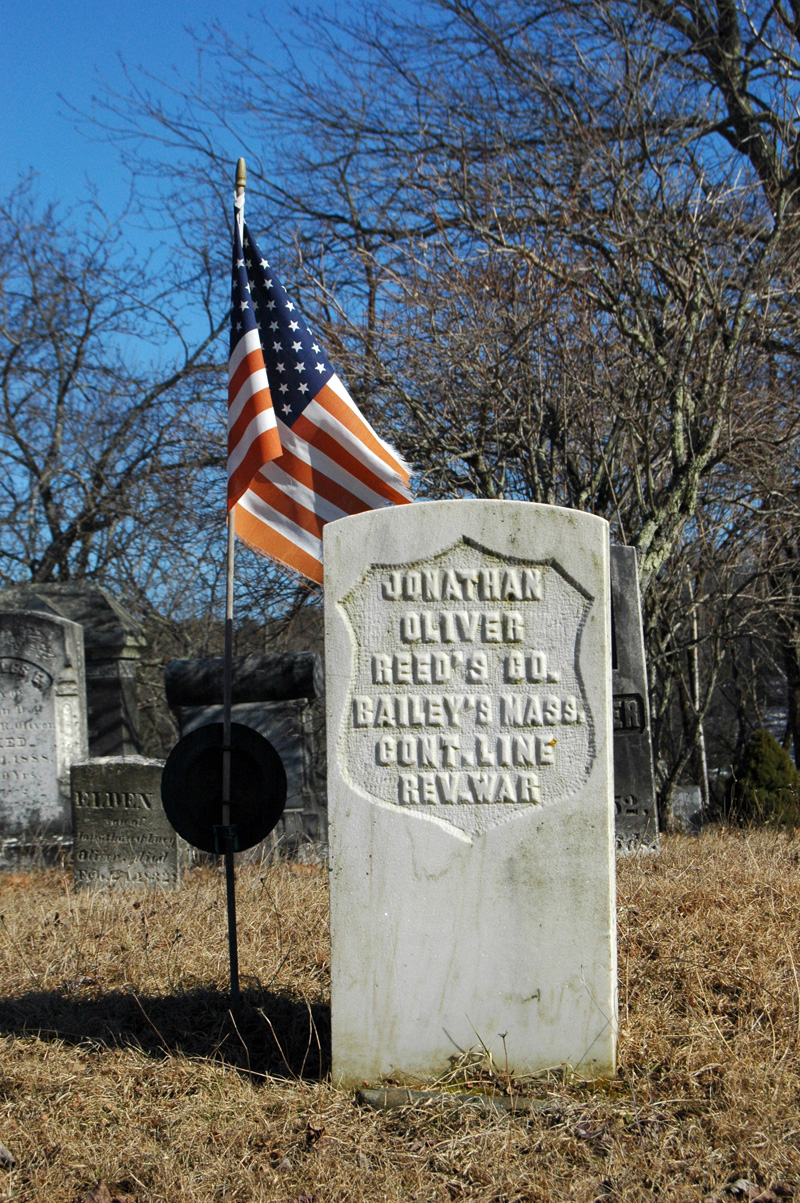 Jonathan Oliver moved to Nobleboro from the Boston area in 1785. He had previously seen action during the Revolutionary War as documented by his headstone. (Laurie McBurnie photo)

Then on April 19, 1775, the Redcoats began their 20-mile march from Boston to Concord to seize and destroy the military stores of the Americans. As we all know, the Minutemen went forward and the first blood of the War of Independence was shed at Lexington. The British continued on to Concord, but much of our war stores had been moved. The Redcoats suffered more casualties on their retreat to Boston, as the Minutemen fired from behind stonewalls and buildings.

One of the Minutemen was Benjamin Ross, who later settled in Nobleboro. He is listed in the 1790 census of our town, having a family of nine, consisting of three males 16 years old or over, three males under 16 years of age, and three females.

The next major event occurred when the British attempted to land more troops in the Charlestown area. During the preceding night, on June 16, 1775, the Americans fortified the hill, and the next day inflicted 1,000 casualties among the Redcoats before the Americans’ supply of ammunition dwindled and they gave way. At least two of our Nobleboro ancestors were there on this exciting occasion, “holding their fire till they could see the whites of their eyes.”

Benjamin Ross, who had previously been at Lexington, enlisted on May 10 and served for 11 weeks and five days, including the June 17 Battle of Bunker Hill.

Jonathan Oliver also was there, and received a wound in his forehead. It is reported that he thereafter wore a small silver coin (or some other metal piece) to close the wound. This Jonathan Oliver continued his war services in Reed’s Co., Bailey’s Massachusetts Continental Line, until discharged at Peaks Hill, N.Y., in January 1777. After the war he settled on East Neck Road and lived until 1837, to age 87. He is buried in the Oliver Cemetery, on the old Oliver homestead, near the junction of East Neck Road and Butter and Egg (Vannah) Road.

The 1813 map of Nobleboro shows his 87 acres of land, bordering Damariscotta Lake’s Muscongus Bay. The 1857 county map shows the homes of two of his descendents on this same land. They were E. D. Oliver, living in the house now owned by Gwendolyn Pinkham Oliver (in 1977); and Jonathan Oliver 3rd, who lived across the road, where Irving Oliver now resides.

Irving, his wife, and three sons, Malcolm, John, and Henry Oliver, continue to live in Nobleboro, as does Mary Jane Oliver Thomas, the daughter of Gwen and Sterling Oliver. Mrs. Thomas and the three Oliver sons are sixth generation Olivers.

Your Nobleboro historian cannot refrain from claiming a sixth generation ancestor, Samuel Dow, fought at Bunker Hill. It is reported that Samuel’s son, Aaron, accompanied his father, and probably participated in the battle.

The Nobleboro archives proudly possesses a copy of the “Bunker Hill Centennial,” an eight-page newspaper published June 17, 1875. This gives full details of the battle, and includes a facsimile of the original letter from the committee of safety ordering the fortification upon Bunker Hill. Also presented is an engraving of the city of Boston by Paul Revere, a detailed plan of the city and harbor, and a representation of the battle. Also of interest are the old-time advertisements.

The Revolutionary War lasted until Cornwallis surrendered the British forces on Oct. 19, 1781. What a day of rejoicing that must have been for our American ancestors. Peace, however, was not formally ratified until Sept. 3, 1783. Negotiations were complex and communications with the Crown and Parliament were necessarily slow in the era of sailing ships – with no telephones or cables.

We know the names of 27 men who served in the War of Independence at various times between 1776 and 1781, and who settled in Nobleboro. An additional seven men settled in what is now Damariscotta, but was part of Nobleboro until 1847. The graves of 16 of these soldiers are known to us, and we honor them each year by placement of veterans’ flags.

He lived until 1843, to age 80. His great-great-grandson, Kenneth W. Flagg, now (1977) lives on the homeplace. Thelma Flagg Kennedy, a sister of Kenneth, lives nearby with her husband, Myron Kennedy.

Rev. Samuel Allen Flagg opened a singing school in North Nobleboro where he met a beautiful girl, Charlotte Jones, whom he married. She was a sister to Life and Sire Jones who built a dam and two mills on the stream that flows nearby, from Cook’s Pond to Damariscotta Lake. Rev. Flagg was the ordained minister from 1808 to 1830 at Bristol and Muscongus Island. In addition to his church work, he taught school during the winter term for 30 years.

A rugged natural boulder was originally located beside the brook. Samuel Allen, as a young man, sat on this stone while fishing. A great-grandson, Dr. Frederick Jackson, arranged to have oxen drag the stone up the rise, into the cemetery to his gravesite. Harriet Moody Flagg, grandmother of Kenneth and Thelma, with the aid of others, provided the bronze plaque.

July 4, 1829, was appropriately celebrated in Nobleboro by a learned oration by Rev. Samuel A. Flagg. This discourse, entitled ‘American Independence,’ comprised 10 typewritten pages, single spaced. It was so highly regarded that it was printed at the office of the “Citizen” in Wiscasset for wide distribution. He eloquently compared George Washington’s leadership to that of Moses in leading the children of Israel out of bondage. And “Moses said unto the people, Remember this day, in which ye come out from Egypt, out of the house of bondage, for by the strength of hand (or power) the Lord brought you out.” Some of his statements were appropriately included in the 1975-1976 annual town report, Nobleboro’s bicentennial issue.

In the meantime, remember that July Fourth is Independence Day, and how we came out of bondage. We suggest that you celebrate with a glass of iced tea, or a cup of hot tea if you prefer. It is cheaper than coffee, and we no longer have to pay England a tax on tea. Our freedom was dearly won.

(As Nobleboro’s town historian, George Dow contributed more than 760 articles to The Lincoln County News. These articles, as adapted by Laurie McBurnie, are being reprinted under the auspices of the Nobleboro Historical Society. Comments or requests about repeating a particular topic may be directed to lmcb293@gmail.com.)