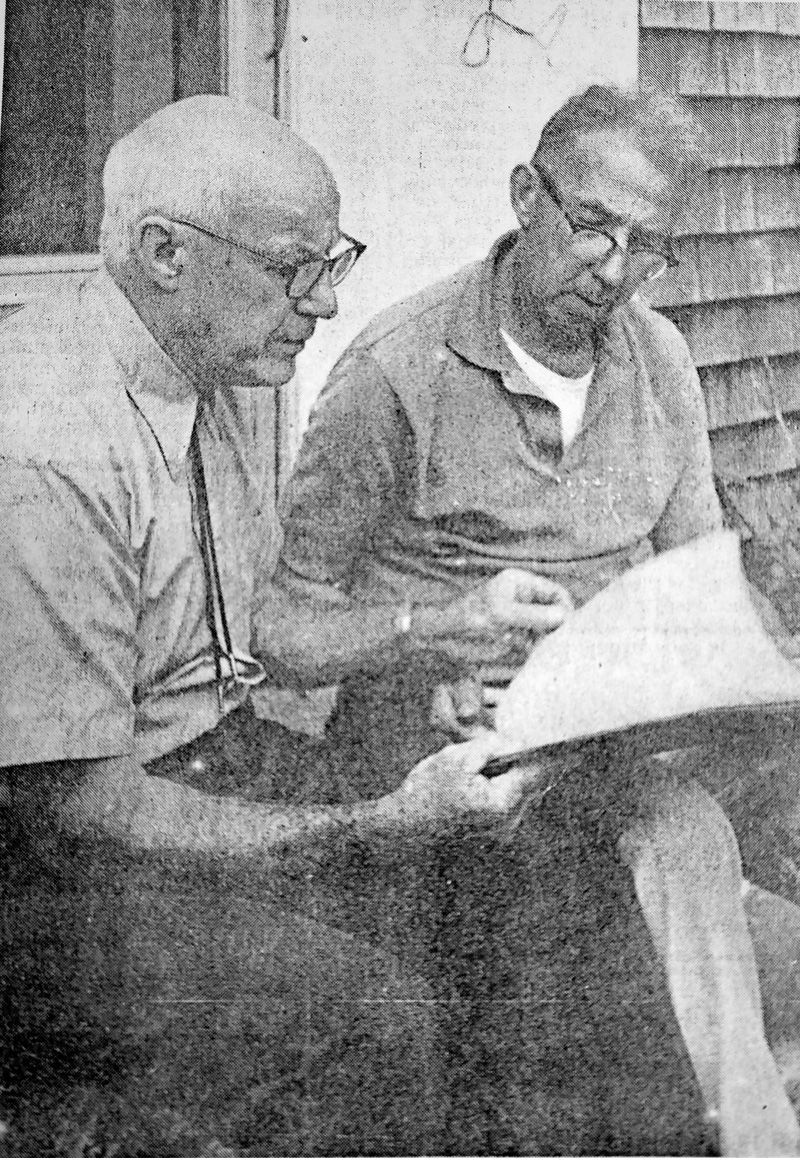 Harry Hagar Sr., right, a long-time employee of CMP, shows Dr. George Dow one of the logbooks formerly kept at the generating station at Damariscotta Mills. Hagar made the final entry on March 19, 1965 when ownership and management was transferred to Laurence J. Keddy. (Photo courtesy Nobleboro Historical Society)

In a recent column we reported the progress made from 1905 to 1925 in bringing electricity to our Nobleboro homes. The local power facilities of the Lincoln County Power Co. had been sold in December, 1923 to Central Maine Power Co. This change in ownership made available the urgently needed capital to replace the generating facilities at Damariscotta Mills that had been destroyed when the Leatherboard Factory burned in 1921.

CMP proceeded promptly to construct a new generating station at the Mills, on the western stream, with continued use of waterpower. The new station was basically the same as the existing plant.

The station at Bristol Mills also was in continued operation for some time. Waterpower was used for supplemental electric capacity, as demand required or as water supply was available. However, by 1977 this branch station had been discontinued, and the water was used as the local swimming pool.

In 1928, CMP increased its waterpower capacity for generating electricity at Damariscotta Mills by raising the dam height by four feet. This was an increase from about six feet to ten feet. A note in an old logbook covering the period of 1948-1957 stated “Full lake at Damariscotta Mills is 9 feet, 3 inches; and at Bristol Mills (Pemaquid) is 6 feet, five inches.” It is reported that, as a result of raising the dam, some land around Damariscotta Lake was flooded, with some damage suits by landowners.

By 1965, Central Maine Power Co. had adopted a policy of unloading their smaller water-powered electric generating plants to other operators, under an agreement to purchase electricity from the new owners. Consequently, on March 29, 1965, CMP sold the Damariscotta Mills generating plant to the Damariscotta Manufacturing Co., with Lawrence J. Keddy as president and principal owner. Mr. Keddy also acquired generating plants at Greenville, Pittsfield, Salmon Falls near Berwick, and South Windham. His headquarters were at the latter station.

Employment at the Damariscotta Mills plant utilized the services of three employees during the early years of CMP management. Each man worked an eight-hour shift, for round-the-clock supervision. Several old logbooks, kept at the plant, listing the detailed day-by-day operations and also the weather, are in the possession of Harry Hagar, Sr., of Damariscotta Mills, whose home is in Newcastle. These books cover the periods of May 1928 to July 1932; July 1932 to Sept. 1935; and June 1948 to Jan. 1957. Hagar started work at the station in 1934, replacing Frank Ames who retired. Hagar was hauling stone for the cement work, driving a team of horses for Emile Hall. The other two workers, supervising plant operations, were George Weston, Sr. and Frank Coro. They alternated each week on the three time-shifts. The first shift was 6 a.m. to 2 p.m., the second was 2-10 p.m., and the third was 10 p.m. to 6 a.m. In later years some shifts were eliminated by placing the plant on a semi-automatic basis. The last entry in the abbreviated logbooks kept in 1964-65 was made by Hagar on the night shift of March 19, 1965, when CMP ceased its management of the station.

Under Keddy’s ownership, the plant was put on a fully automatic operation, supplemented by routine check-ups by Nelson C. Hancock of Nobleboro Center. Hancock also operated the headwater gates in the dam for regulating the flow of water to the generator, for controlling the water level in Damariscotta Lake, and for providing optimum conditions in the Locke (or Sacred) Stream for the ascent of alewives in the springtime to spawn in the lake above, and for the descent of the young alewives from the lake to saltwater in late summer and fall.

Of historical interest is an evaluation of the waterpower potential in the Damariscotta Mills area that was made prior to the construction of the Leatherboard Factory in 1906. Harold M. Castner, a nephew of Herman Castner, reported that a group of businessmen in Salem, Mass., offered to buy the water rights and related property for $100,000 if a survey proved that 1,000-horsepower could be developed on a daily basis throughout the year. Measurements also were taken at nearby lakes and ponds, but the daily flow of water was a shortage of 300 horsepower in July and August, and the proposal collapsed. It had been proposed, if the project had been successful, to electrify the Maine Central Railroad from Bath to Rockland. Subsequently, the Salem group purchased the Damariscotta Mills waterpower property for $25,000 and erected the Leatherboard Factory.

The generating station, as of now (1977) owned by the. Damariscotta Manufacturing Co., pays taxes in both towns. The 1977 full assessed valuation for Nobleboro (after adjusting for 50 percent valuation) would be $43,400, and for Newcastle in 1976 (adjusted for 80 percent valuation) would be $69,500. In addition, the full valuation of the power lines of Central Maine Power would be $320,000 for Nobleboro, and $589,825 for Newcastle. Obviously, our local electric power facilities contribute much greater tax revenue to our towns than was provided by the kerosene lamps and lanterns used in the early 1900s.

Central Maine Power, the present source of our electricity, has had an excellent record for competent and prompt service to its customers. The company also employs a number of local persons. A 38 percent ownership by CMP in the modern Maine Yankee nuclear power plant in Wiscasset has helped to keep costs for electricity at a lower level than at other electric companies in central and northern Maine.

(As Nobleboro’s town historian, George Dow contributed more than 760 articles to “The Lincoln County News.” These articles, as adapted by Laurie McBurnie, are being reprinted under the auspices of the Nobleboro Historical Society. Comments or requests about repeating a particular topic may be directed to lmcb293@gmail.com.)