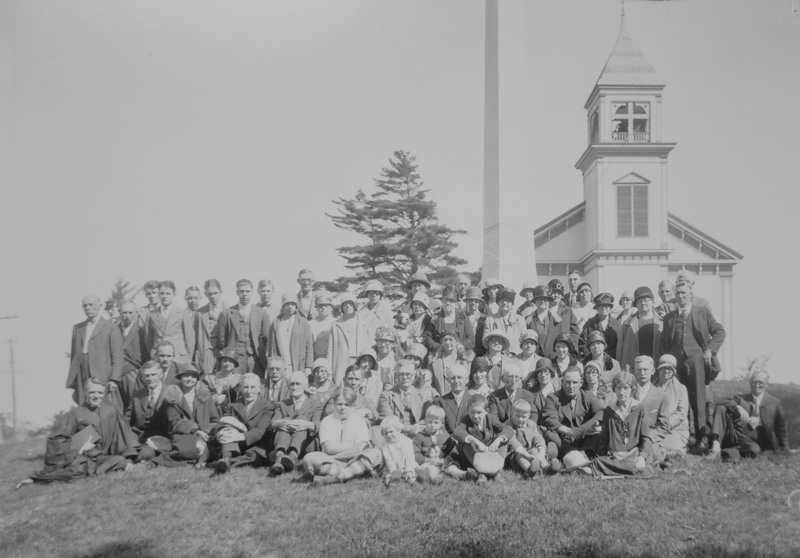 Members of the men’s and women’s clubs of the First Baptist Church of Nobleboro, 1929. (Photo courtesy Nobleboro Historical Society)

In October 1972, our church started, with high hopes and enthusiasm, to take apart an old camp building in Jefferson. Now, after nearly three years of great cooperation and effort by so many persons, and with continuing leadership by Pastor Chapman, we rejoice today in the dedication of this beautiful building to the greater service and glory of our Lord.

This period of three years, on occasions, seemed like an awfully long time. But this span of time has permitted us to contribute a vast number of hours of free labor by members and friends and to provide cash contributions of about $13,000. As a result, we have this $50,000 addition and have had to borrow only $3,900. (And these loans were all provided by local members at very low interest rates.) Praise the Lord!

In order that you may realize more fully the extent of this three-year achievement, let us review a bit of history. This church was originally organized in 1793. Three years later, the town voted to build a meeting house. Ten years later, the exterior of the building was completed and the outside painted. Three years later, a committee was selected to plan the inside of the meeting house and after eight more years, in 1817, the building was finally completed – a total of 21 years while construction was underway. And even then, the meeting house was far from paid for.

It was necessary to sell the pews at auction, giving deeds to the owners. The church now has in its possession one of these original deeds, dated August 1817, for pew No. 27. This deed was signed by a committee of three, one of whom was Joseph Chapman, the great-great-great grandfather of Walter Chapman and his brothers and sister. The auction cost for this pew was $35.25. How thankful we should be that we can attend church today without having to officially buy a pew. Don’t let anyone kid you about how wonderful everything was in the “Good Old Days.”

But let us not belittle the efforts and achievements of this early church in our town. The original mem­bership in 1793 was only 13, and in 1804 (11 years later) the number had increased to only 22 members. It was not until 1807 that the church obtained the services of a regular “settled” pastor and what a man of God he was – Elder Phineas Pillsbury, who was pastor here for 29 years.

Within two years of Elder Pillsbury’s arrival, 57 new members were baptized. Another strong revival occurred in 1815 when 114 persons were baptized. With this religious fervor and increased membership, we now understand why the meeting house was pushed to completion two years later in 1817.

Every major achievement, whether now or in early times, requires motivation and able leadership. How about our motivation for the new addition that we will have completed in three years? Undoubtedly one factor, appealing to our Yankee thrift, was that the old camp building (now transformed) was available to us for free, and Roland Bragg offered to move it here without cost to the church. A more urgent factor, however, was our expanding church membership and Sunday school attendance that made it imperative to have additional space. What would we have done this past year without the new addition, with Sunday school attendance averaging 120, with an occasional peak of 140-plus?

Another motivation has been that of Christian love and fellowship, which has kept a devoted band of men cooperatively working together each week to com­plete this addition. The sound of hammers is one good way to “make a joyful noise unto the Lord” and Christian love has been expressed by many persons who have made regular contributions of cash to meet expenses. And our “Commodore” Schroeder would want me not to overlook Marion Hall and her homemade doughnuts and refreshments from others who have helped lighten those Monday work nights. Special appreciation also is expressed to the Greenough Church Edifice Association for special contributions in each of these three years.

Today, as we dedicate this new addition, we are happy to welcome the descendants of two families who have been historic leaders in this community and in this church – the Chapmans and the Trasks. The beautiful room on the first floor, where we will gather for the reception and refreshments, is being named the Chapman Room in memory of Joseph F. Chap­man, a former member of this church, who lived to age 94 (1877-1971). His home was in Damariscotta, where David Chapman now lives. He was a direct descendant of Anthony Chapman, the very first settler on Back Meadow. Anthony was born in 1713, and came to Damariscotta (then Nobleborough) in 1749, where he first built a log cabin.

He explored the land eastward and to the north from his home, first passing through what was known as Cranberry Meadow. He then came to a fine meadow out back, which became known as “Back Meadow.” This meadow was so productive of hay and promising as agricultural land, that he moved there about 1762, and became the first settler there. His home is now owned and lovingly preserved by Mr. and Mrs. Ernest Thompson. Mr. Thompson is an expert silversmith and carries on his craft in the old Chapman barn. The location is near the junction of Back Meadow and Egypt roads.

Anthony Chapman and his wife, Sarah Patch, had seven children. Their two older sons, Nathaniel and Joseph, became spiritual leaders in our church. Of the 13 original members who “constituted” the church in 1793, six were of this Chapman family. These six included Nathaniel, Sarah, and their two daughters, Patty and Ruth, and also Nathaniel’s brother Joseph and his wife Martha. This Nathaniel Chapman was chosen the first deacon of the church.

A few years later, in 1811, William Chapman, son of Joseph, was chosen as the third deacon in the church. Jacob Chapman, a son of Deacon Nathaniel, also was an active church leader and served on many occasions as a “messenger” representing our church at association meetings of the Baptist churches.

Also of historic interest is that Joseph Chapman settled and built his home somewhat to the east of father Anthony’s home. When a visitor inquired where Joseph had gone, the reply was, “He has gone down to Egypt to plant corn.” And ever since then the road that developed over by Joseph’s home has been known as Egypt Road.

The small cemetery in back of Anthony Chapman’s old-time home is a very historic one. In 1790, the first year after the town of Nobleboro was organized, at the first annual town meeting, this cemetery was one of four one-quarter-acre lots of land accepted as burial grounds. This Chapman cemetery (now in Damariscotta) is the resting place of Deacon Nathaniel and members of his family, and also presumably that of his parents Anthony and Sarah.

Recently acquired is a group picture taken in 1929 of members and friends of the church. This includes Joseph F. Chapman and son Walter, who were members. Walter and his brothers and sister are the sixth generation from early settler Anthony. These children are James, now in the Damariscotta area, who has been a credit and loan manager in New Jersey; Kendrick, a wholesale plumber in Auburn; Walter, our own Damariscotta banker; David, the owner-operator of a Damariscotta hardware store; and Bernice, a school teacher, now Bernice Clark of Cape Elizabeth.

Now for a few historic comments concerning the Trask family. The Rev. Enos Trask was the second regular pastor of our church, who was another great preacher. He served our church from 1836-1849, a period of 13 years. During his first year as pastor in 1836, it is reported that “an extensive work of grace was carried forward by the Spirit of the Lord in the first church, during which the number of 151 united with them by baptism.” In 1840-42, a total of 110 more members were added to the church. His picture hangs on the walls of the Carter Room, along with that of Elder Phineas Pillsbury, two tremendous servants of the Lord.

Rev. Trask built his home on Lower Cross Road, first house west of the railroad tracks, north side of the road. This house burned in the fall of 1882, two years after Rev. Trask died. The house, however, was promptly rebuilt to serve other members of this large family. Jennie Trask (later Jennie Hall) was born there a few months after the house was rebuilt. Also born there were two sisters and a brother: Hortense, Gladys, and Frank Judson. They are great grand­children of Rev. Enos Trask. Jennie and I were reckoning that over 20 descendants of the Reverend now live in Nobleboro, including the families of Clive Hall, Eileen French Gould, Jennie Trask Hall, and Judson Trask. Other Trask descendants in the families of nearby towns total about 50, among whom can also be counted the children of Joseph F. Chapman. Mr. Chapman’s first wife, mother of Walter, James David, Kendrick, and Bernice, was Linda L. Winslow, who was a great granddaughter of Rev. Trask.

And now, in more recent years, since the marriage of Hortense Trask to Joseph Chapman, the Trask and Chapman families have become even more directly united.