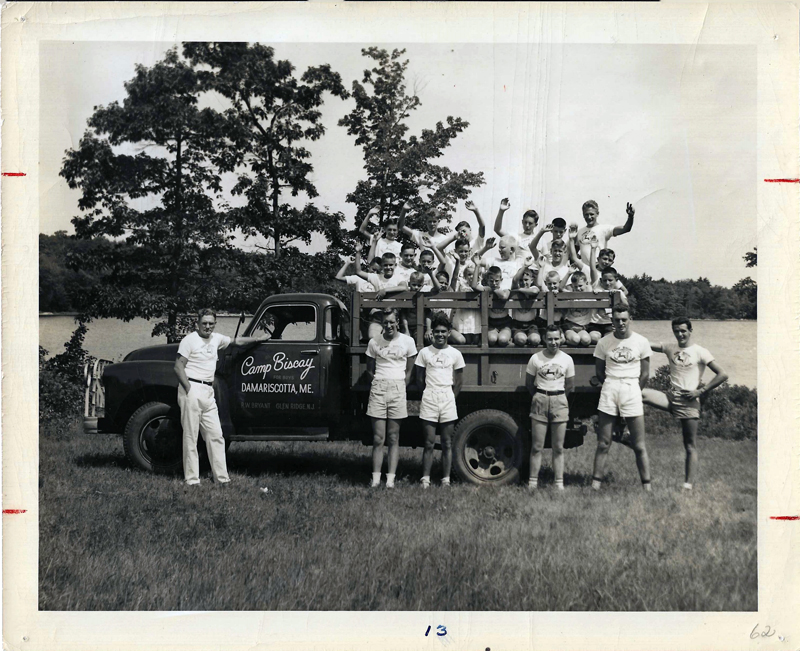 Over the past six months, through this column, I have been able to share many memories of summers on Biscay Pond and, now, life as a year-round resident. Some of my vague summer memories involve a boys’ camp located on the Fogler Road. I remember hiking down the Fogler Road as a child and seeing this camp on both sides of the road. I recall the “Camp Biscay” truck being parked in Damariscotta and I have memories of campers canoeing down the Pond.

Turns out that Camp Biscay was founded by year-round resident Mary Bryant Berger and summer resident Dotty Bryant Booher’s father and mother, Dick (aka known as Chief!) and Dot Bryant back in 1946. Campers were welcomed to the camp for the first time in 1947 and the legacy continued through 1965. I sat down recently to learn more about the camp from Mary and Dotty. It was fascinating to learn about the camp property, activities and history.

Camp Biscay was a boys’ camp in all the finest traditions. As was true and still is true, many camp directors and assistants were teachers during the school year, and so it was with Dick Bryant who taught in the Glen Ridge (NJ) High School. Dot Bryant filled many roles, including camp nurse and mother-figure to scores of campers. In the camp’s latter years, daughters, Dotty and Mary, added a local, day camp program to Camp Biscay. It truly was a family affair!

As mentioned, Camp Biscay was located about a mile down the Fogler Road off Biscay Road, with Fogler Road running right through the middle of the Camp. One of the first buildings families encountered on the east side of Fogler was the office, immediately adjacent to the road. Behind it stood the large multi-purpose building that had a history before Camp Biscay, as a place for Dog Field Trials and as a local Dance Hall. This building stands to this day as a beautifully, renovated home! Campers knew this structure as the Lodge, housing the kitchen and dining room, also as a place to gather for movies. Wood shop, run by a colleague of Dick’s who taught shop at Glen Ridge High School, also occurred there.

Many of the smaller, camp bunk houses were located in the vicinity of the Lodge, given names such as Crook’s Haven and the Eagles Nest. Also on this side of the road were numerous opportunities for fun and games. There was a small stable for horses and a riding ring, a clay tennis court which campers and counselors rolled out daily, a baseball diamond, a horseshoe pit, and a rifle range, in addition to many natural areas for exploration.

On the pond side of Fogler Road, there were additional cabins for the campers and counselors, as well as the infirmary. Campers were able to play croquet and practice archery here, too. Of course, the most important activities located here were all the water sports: Red Cross swimming lessons, boating, sailing and just carrying on as boys of those ages are famous for doing.

I learned a lot from Dotty and Mary about Camp Biscay that I never knew. Above is about the physical aspect of the Camp. Next week, I look forward to telling you more about the life of the campers: their routines and all they did when they traveled from away to Camp Biscay!