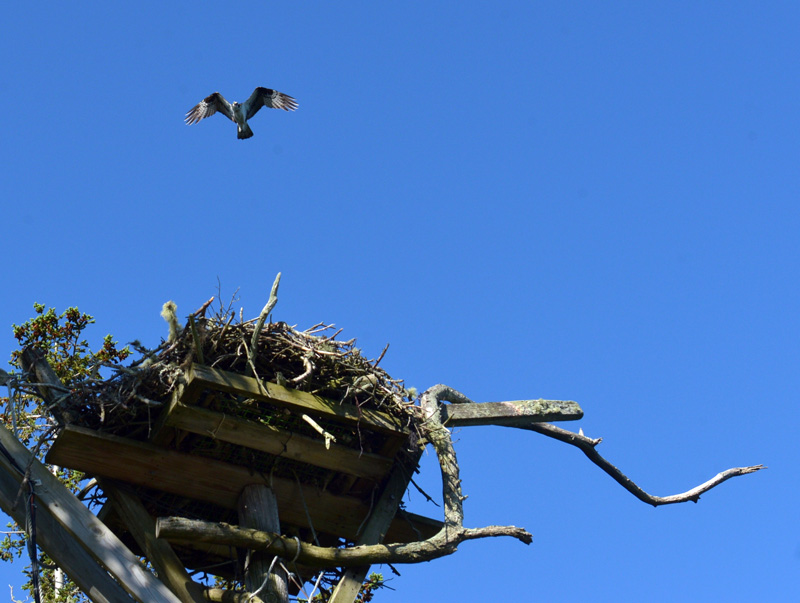 An osprey flies over its nest on Hog Island. (Paula Roberts photo)

The 330-acre National Audubon Todd Wildlife Sanctuary is located on Hog Island in Bremen. A smaller portion is on the mainland, where Hockomock Nature Trail is located. Hog Island lies about a quarter-mile offshore, just south of Keene Narrows. The closest public access is from the town landing on Medomak Road in Bremen.

A private National Audubon landing and buildings are located on the northern end of Hog Island. Boaters are encouraged to pull up on the west shore of the island, onto one of four sand beaches. Be sure to pull up your canoe or kayak and tie it to a tree, so as not to lose it when the tide comes in.

Millicent Bingham donated the island to the National Audubon Society in 1936 and stipulated that it was “to be used solely as a wildlife sanctuary in teaching the aims and ideals of (society) in the study of conservation and wildlife, and not for any business or commercial purpose.”

The island was named for the livestock that roamed the island years ago. Dr. David Todd and wife Mabel Loomis Todd purchased much of Hog Island in 1908 to conserve it and prevent heavy logging and overgrazing. Their daughter Millicent spent many summers exploring the island and tide pools in her youth. She inherited the island in 1932 and in 1935 partnered with the National Audubon Society, which was looking for a site of ornithological significance. Hog Island was a perfect fit. 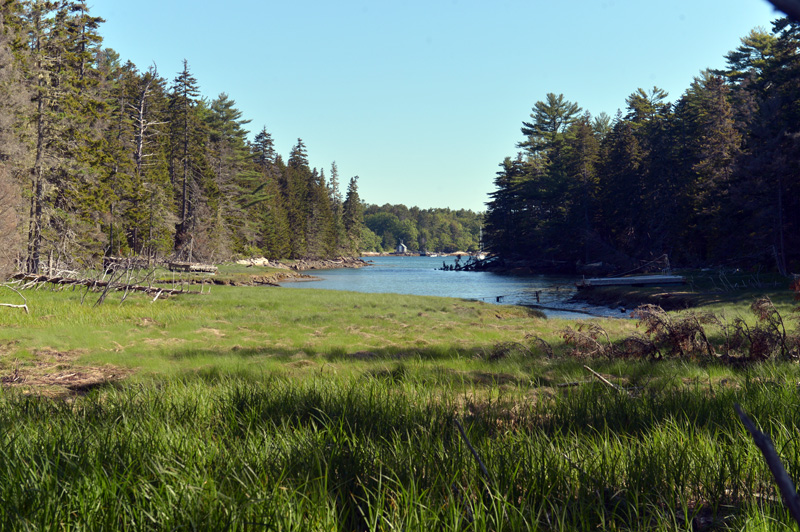 A year later, National Audubon launched its first nature study camp.  More than 20,000 teachers have studied in Hog Island’s natural classroom since it opened 84 years ago.

Visiting the island has been discouraged over the years when Hog Island Audubon Camp is in session, but with the COVID-19 pandemic, the camp was forced to shut down this summer. The website states that the trails are open for hiking.

Anyone who has always wanted to walk the trails at the Todd Wildlife Sanctuary should find a way to do so this summer while there is an open invitation.

One of the first things a hiker sees as they approach the northern end of the island is a gigantic and active osprey nest. Osprey are just one of 150 bird species that have been spotted on or near Hog Island.

There are two sections to the island. The northern part, near the dock, contains almost all the camp buildings used for education and housing. It is almost entirely separated from the rest of the island by Long Cove and a narrow strip of land. The southern part of the island contains most of the trails, beaches, and a couple of cottages on the west shore. The beach on the east side stretches along both sections. 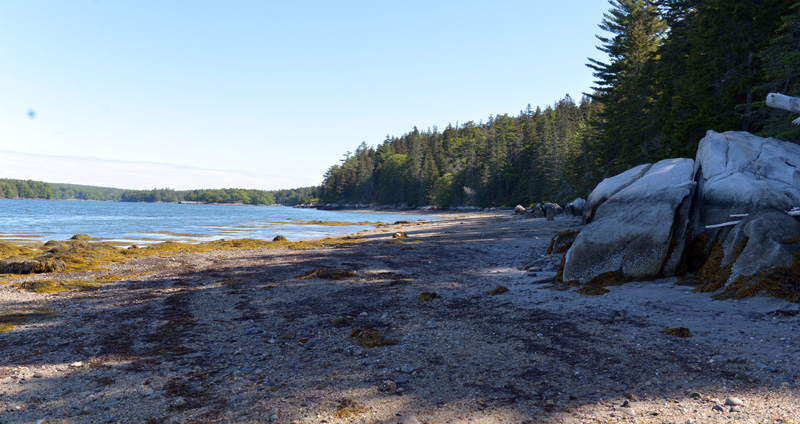 Sand Beach from the West Side Trail on Hog Island. (Paula Roberts photo)

Paddle past three small beaches before reaching a 300-yard-long beach. Once on the island at Sand Beach, there are trails (East Side and West Side) that form a loop around the perimeter of the island. Walking both in a loop is about 3 miles. Plan on two to three hours to hike the loop, as there are many opportunities to walk on beaches, stop on a scenic ledge, explore a tide pool, or stop and enjoy a snack or lunch.

The first thing you notice as you enter the dense woods is the moss, which is every color of green imaginable and covers everything. The moisture from the fog on the coast creates a perfect habitat for its growth.

The island is kept in its natural state, which means that when a tree blows over, it stays where it lies. The only exception is if it falls on a trail; then it is cut just enough to walk through. Due to the COVID-19 pandemic, trail work had not been done yet as of mid-June. Hikers should expect to crawl under, over, and around blow-downs, especially on the east side and the Center Island Trail. There are fewer blow-downs on the west end. 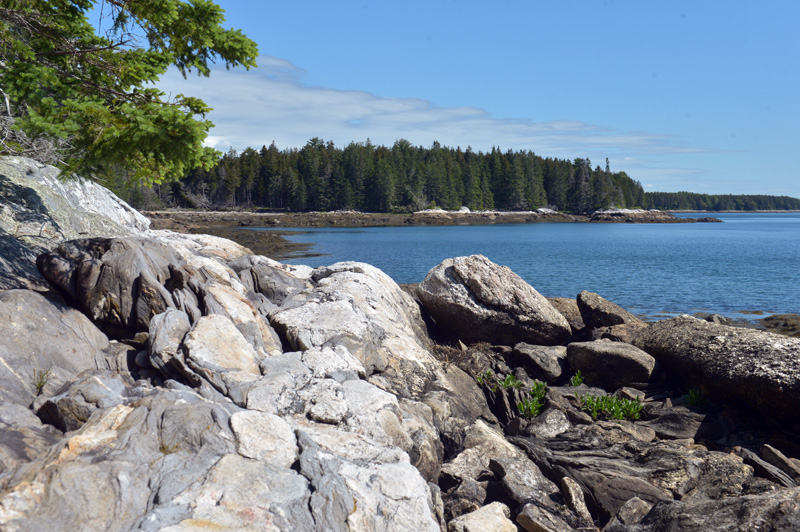 There is an abundance of spruce, hemlock, and pine trees on the island, which forms a dense canopy. That, mixed with a nice breeze off the ocean, makes for a comfortable hike, even on a hot day. Hardwood trees are few and far between on the island, which was heavily forested years ago.

While paddling to the beaches on the west side, look for shell heaps near Long Cove, remnants from the Abenaki people. The shell heaps form a long, narrow ridge and stretch nearly across Long Cove. At low tide, paddlers will have to go out and around them to access the beaches.

Paddling to Hog Island and hiking around the perimeter is a half-day venture. It should only be attempted in good weather with no fog. Good weather is worth the wait, as the salt air, cool breeze, and scenic views will fill the senses with an explosion of beauty and awe and reward the hiker a hundredfold.