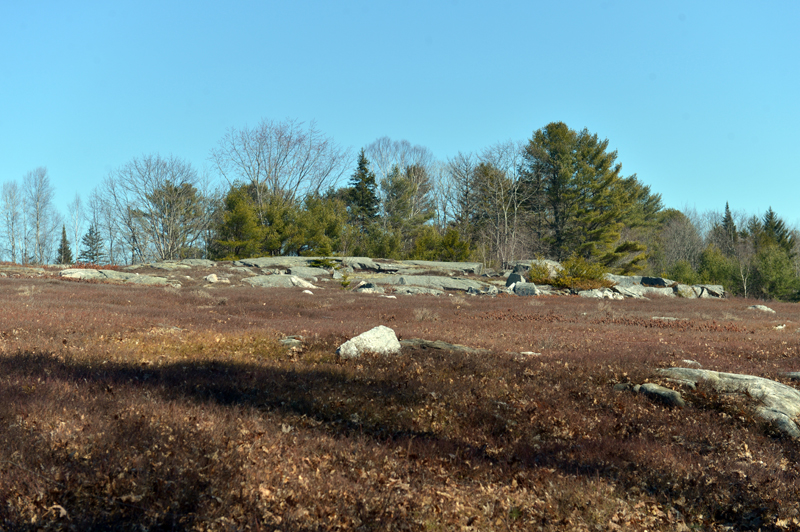 The MVLT Founders Preserve starts on the town of Waldoboro’s Quarry Hill Preserve and follows the perimeter of a blueberry field from the kiosk. (Paula Roberts photo)

(Directions: From Route 1 in Waldoboro, turn onto Depot Street (near the fire station and town office) and drive 1 mile. Turn right onto Quarry Road (there is a sign for the Quarry Hill Preserve). Drive past the quarry to the top of the hill, where the road splits. A kiosk is on the right and the trailhead is to the left of the kiosk.)

MVLT Founders Preserve consists of 107 acres and has some of the hilliest terrain found in Lincoln County. Combined with the 320-acre Quarry Hill Preserve, owned by the Town of Waldoboro, it forms a wildlife corridor of more than 400 acres that supports an abundance of species with its diverse habitat.

Although the preserve is mostly wooded, it has a 10-acre field, which provides habitat for deer and numerous bird species. Birds spotted on the preserve include bobolink, veery, black and white warbler, yellow warbler, chestnut-sided warbler, eastern towhee, and white-throated sparrow. On a recent early spring hike, year-round birds spotted included a barred owl and pileated woodpecker.

Power lines run through the preserve and offer spectacular views of the hilly terrain. In the woods, the ground is carpeted in green moss and small fir trees, making for a beautiful hike, even in early spring. 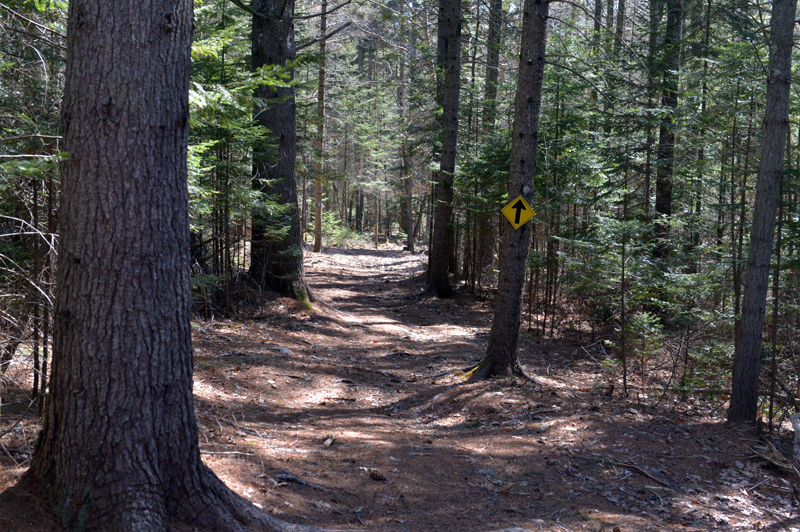 The trail through the MVLT Founders Preserve in Waldoboro is mostly wooded. (Paula Roberts photo)

The trailhead starts on the Quarry Hill Preserve. The trail starts to the left of the kiosk and follows the contour of a blueberry field for about 100 yards before entering the woods on a wide path. There are many snowmobile trails and woods roads on the property, so special care should be taken to follow the blue marks. The woods and field trail is 1.75 miles long and the boundary trail is 1 mile long. Both trails are blazed in blue. Plan on at least an hour to hike both in a giant loop. 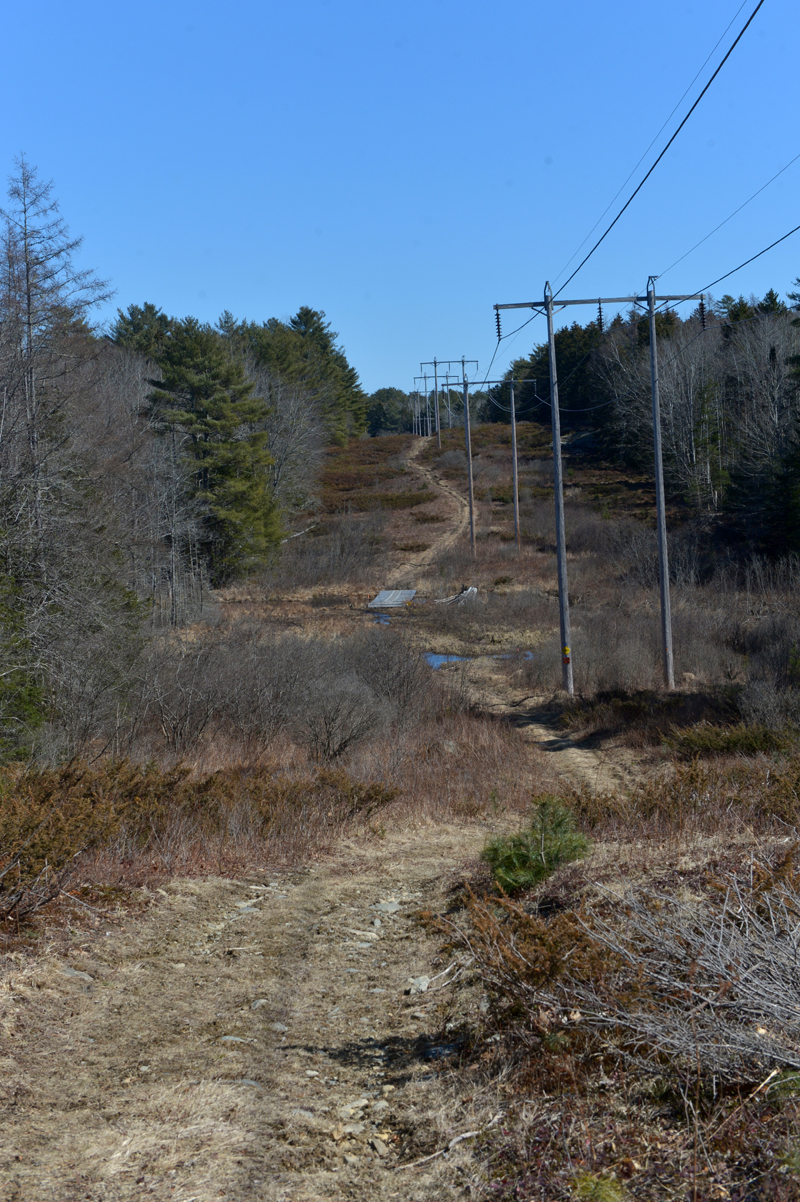 A snowmobile trail runs along a utility corridor through the MVLT Founders Preserve in Waldoboro. The boundary trail crosses the snowmobile bridge, takes an immediate left, and proceeds into the woods along a narrow footpath. This section of trail is wet, but was navigated easily on a recent hike. (Paula Roberts photo)

For a longer hike, walk down over the hill, following the snowmobile trail along the power lines, and cross a snowmobile bridge. The area around the bridge is wet. There are numerous wooden planks in the area, so it is possible to cross the wet area and bridge without getting your feet too wet.

Immediately after crossing the bridge, turn left and enter the woods along a narrow footpath on the boundary trail. The trail is barely visible, but as soon as you enter the woods, blue markers can be seen.

Pay careful attention to the blue blazed markers on the boundary trail, as there are many turns on the winding path. The trail heads uphill to a stone wall and shortly thereafter turns sharply left at a double blue blazed mark. If you come to a section where young evergreen trees are sprouting and then orange blazes are seen on trees, you have missed the turn. Turn around and go back to the intersection.

The trail turns extremely steep and heads straight uphill. This is a great hill to prep for a hike up a mountain, whether it be Megunticook in Camden or mile-high Mount Katahdin. It is that steep.

The trail comes out to a wide road. A left turn takes you back to the woods and field trail loop. To return to the kiosk and parking, walk straight across the woods road. The trail heads sharply downhill.

The trail turns right, goes over a stone wall (pay attention to the blue blazes), and after a short distance turns left. The trail leads to the intersection at the start of the woods and field trail. Turn right to head back to the kiosk.

Hiking boots or sturdy footwear is a must. The trail is wet in portions and extremely steep in sections. Packing water and a snack are strongly recommended.