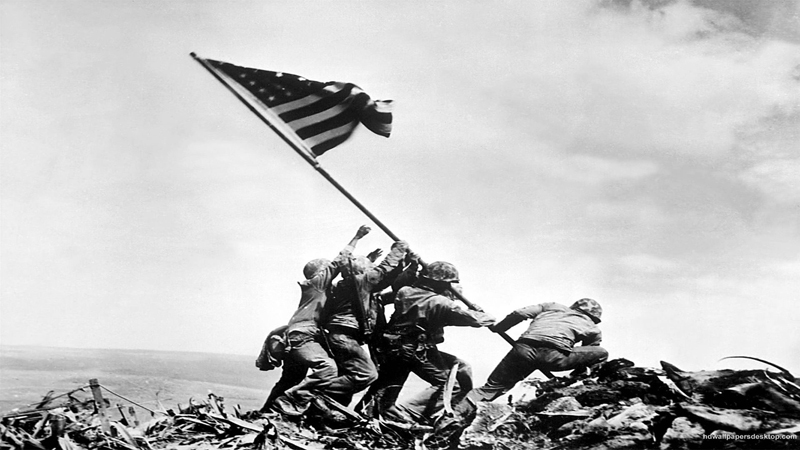 The raising of the second flag on Iwo Jima. (Photo courtesy Joe Rosentahl)

The battle of Iwo Jima, fought on Feb. 19, 1945, during the closing days of World War II, is remembered by many of that generation and certainly by all the Marines who survived the assault on the remote Pacific island 650 miles from Japan. Now, younger Americans may not be aware of the determined struggle that pitted over 100,000 men, including 70,000 Marines, against 22,000 entrenched Japanese defenders who fought to the last man.

The battle lasted 36 days and resulted in a vital American victory. It also resulted in the most widely reproduced photograph of all time – the raising of the flag on Mt. Suribachi on Feb. 23, taken by Associated Press photographer Joe Rosenthal.

The image has appeared in countless formats and was the model for the U.S. Marine Corps Memorial in Arlington, Va. Few Americans, however, realize that the flag in the photograph was not the first flag flown that day on Iwo Jima. A detailed account of how two flags came to be flown is provided by James Bradley in his book, “Flags of Our Fathers.” Bradley is the son of John “Doc” Bradley, a Navy corpsman who was one of the flag raisers in Rosenthal’s famous photo.

With the patrol was Sgt. Louis Lowery who would photograph the event for Leatherneck magazine. The long line of Marines inched their way up to the summit, but despite previous enemy resistance, they were not attacked. By 10:20 a.m., Sgt. Lowery posed the men in the photograph, and the stars and stripes, attached to a makeshift piece of pipe, fluttered proudly from the top of the dormant volcano, the first foreign flag to fly from Japanese territory.

Among the invasion armada that day was James Forrestal, secretary of the Navy, who saw the flag and decided he wanted it as a souvenir. Col. Johnson – who would be killed in battle a few days later – was so advised. He felt that the flag belonged to his battalion, and dispatched one of his officers to locate a second flag as a replacement.

As it turned out, this second flag was considerably larger (96-by-56 inches) and, as author Bradley states, “had been found in a salvage yard at Pearl Harbor, rescued from a sinking ship on Dec. 7, 1941, the day of the Japanese attack.”

Meanwhile, photographer Rosenthal, who just landed on the beach, learned that a flag was about to be raised, and approached two other combat photographers at the base of Suribachi. Even though it seemed too late to ascend the slope in time, the three trudged up the narrow incline.

On the way up, they met Sgt. Lowery coming down; Lowery told them he already photographed the flag raising, but that they should continue because there was a good view. Apparently, no one was aware that a replacement flag was about to be raised. The three photographers proceeded onward and arrived at the time when the first flag was being lowered and the second, larger flag was being raised, each on a separate length of pipe. It happened so quickly that Rosenthal didn’t have a chance to look through the viewfinder and wasn’t sure he’d captured the image he wanted, so, like Sgt. Lowery, he posed a photo, this time of the second flag raising.

Within a few weeks, this replacement flag was destroyed by the high winds at Suribachi’s top, but not before Rosenthal’s first, spontaneous, unposed photo – the one he wasn’t sure of – was being transmitted to newspapers around the world.

The speed of the AP wire and the striking heroic aspect of the photo quickly eclipsed Lowery’s image of the first flag and the identities of the men who raised it. Within days, the names of the flag raisers in Rosenthal’s photo became widely known to the American public: Navy Corpsman John “Doc” Bradley, age 22, from Appleton, Wis., and five Marines – Private Ira Hayes, age 22, a full-blooded Pima Indian from Arizona; Private Franklin Sousley, age 19, of Hilltop, Ky.; Corporal Harlon Block, age 21, of Rio Grande Valley, Texas; Private Rene Gagnon, age 19, of Manchester, N. H.; and Sgt. Mike Strank, age 25, of Franklin Borough, Pa., considered the “old man” by his comrades. All were members of Easy Company of Lt. Col. Johnson’s 2nd Battalion. They were brought home to participate in War Bond drives, meet the President and other officials, and mingle with celebrities at public rallies, but not before three – Strank, Sousley and Block – had been killed in action.

The surviving flag raisers were by and large uncomfortable with this new attention and unwanted fame which lessened somewhat over time but never fully stopped and would haunt them the rest of their lives. Their part in raising the second flag, they felt, was insignificant: They had not even known they were being photographed. The nation’s focus should instead be on their comrades who were still fighting and dying in the Pacific. When they were interviewed countless times over the years, they indicated that the flag in the now-famous image was just a replacement for the first flag, but no one appears to have listened or cared. The mythology of The Photo had taken root and to this day is still deeply implanted in the national psyche.

Whenever the flag raisers were described as heroes, which was often, “Doc” Bradley spoke for them all when he said, “I was in a certain place at a certain time. We all just jumped in and lent a hand. That’s the way it is in combat. The heroes of Iwo Jima are the guys who didn’t come back.”

Still, in the public mind, the replacement flag became the only flag raised on that far-off battlefield, and the men who raised it performed an exceptional act of valor. The original flag and the men who undertook the mission to fly it were largely forgotten except by those who were there, an omission now corrected in part by James Bradley’s book.

Later generations might ask what relevance does all this have to us in 2022? Because the past is not linear, something that happened long ago is not over. In fact, it can be as real now as it ever was, just as personal memories are detailed and vivid.

Remembering what happened in our nation’s history adds dimension and richness to the present because it helps define and explain our experiences as a nation and as a people. As the two flags of Iwo Jima illustrate, it is all too easy to replace the real story with an invented one, but that does not detract in any way from the meaning of the flag raising itself.

Despite the renown of Rosenthal’s Pulitzer-prize winning photo, it was the first flag raised on Mt. Suribachi that caused a spontaneous celebration as Marines cheered on the beaches and the navy ships offshore sounded their whistles, even in the midst of battle. These men cared for, fought for, helped, and protected each other and in so doing vanquished the common enemy, safeguarded their country, and helped bring a terrible war closer to its end.

They knew what the flag represented and what it had cost in lives.

(Don Loprieno is a lifelong student of history and education. He lives in Bristol.)