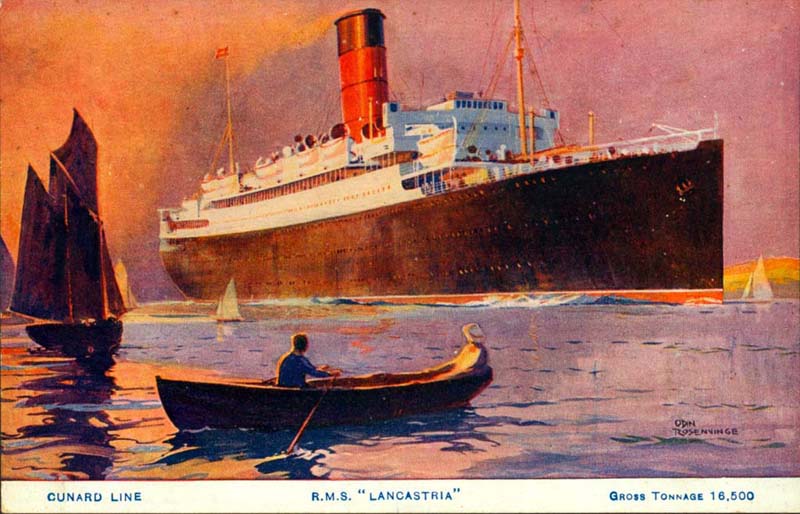 At least 5,000 civilians and military personnel died when German planes sank the Lancastria off southern France on June 17, 1940.

History may not be everyone’s favorite topic, but because there’s so much of it, everyone remembers something. For instance, if the topic of tragedies at sea is mentioned, the names of the same famous ships almost always come to mind. It’s pretty much certain, however, that no one will think of the 16,000-ton Cunard liner Lancastria, yet it was Britain’s worst maritime disaster. In fact, the number of lives lost was greater than the combined total on both the Titanic and the Lusitania, each of which is far better known.

Originally, Lancastria was a cruise ship, but in April 1940 she was officially requisitioned for service in World War II, becoming His Majesty’s Transport Lancastria. She completed several missions, including one involving the evacuation of British troops from Norway, which had just fallen to the Nazis.

On June 17, 1940, Lancastria lay 5 miles off the coast of southern France. Although British troops had been evacuated from Dunkirk, many more were stranded in or near the port city of St. Nazaire, and France was about to surrender to the Germans. The ship had been assigned to take on both civilian refugees, including women and children from France and Belgium, as well as military personnel. Every bit of interior space was soon jammed with human cargo, and Lancastria was carrying many times her peacetime capacity. The total may have been as much as 9,000 people — to this day the exact figure is unknown.

It is one of the peculiarities of war — and there are many — that no distinction is made between attacking troops on a battlefield where they can defend themselves, or attacking them on a passenger ship at anchor in a harbor where they can’t, even if there are civilians on board as well. Consequently, German aircraft began to target the now-crowded liner, dropping bombs that damaged her fuel tanks, causing oil to leak from the stricken vessel.

The fatal blow was struck by a bomb that exploded down her funnel. She soon began to list heavily, and a grisly scene played out that was both tragic and bizarre. As Lancastria rolled to her side, those on her hull began singing “Roll Out the Barrel” and “There’ll Always Be an England.”

The German air attack continued, preventing other ships from coming to Lancastria’s aid and strafing those who had abandoned ship and were now struggling to reach safety. The ship sank in just 20 minutes, and only 2,447 survivors were pulled from the oily waters. At least 5,000 people perished.

Why isn’t this disaster better known? At the time, the British public had suffered a number of devastating blows, including the rapid military successes of Germany, which now controlled the European continent, leaving Great Britain to fight on alone. To avoid eroding morale any further, Prime Minister Churchill prevented the loss of the ship and so many lives from being reported in the press.

It would be over a month before word of the attack appeared in British papers, but it was not widely covered. As the conflict continued and the Battle of Britain began, it was replaced by other war news and was soon relegated to an obscure footnote in the ongoing saga of defeat and victory.

In a way, Lancastria’s fate was different from that of the Titanic, which struck that infamous iceberg in 1912, when the world was still at peace; and the Lusitania, which was torpedoed by a German U-boat in May 1915, in the early years of the First World War. In one respect, however, all three disasters are identical: The lives of all those on board were no less precious, their efforts to survive were no less valiant, and the loss of so many men, women, and children was no less tragic.

(Don Loprieno has maintained a lifelong interest in education and history. For nearly 20 years, he developed and implemented interpretive programs for Revolutionary War historic sites in New York’s lower Hudson Valley. He has lived in Bristol since 2001, where he is active in community affairs.)