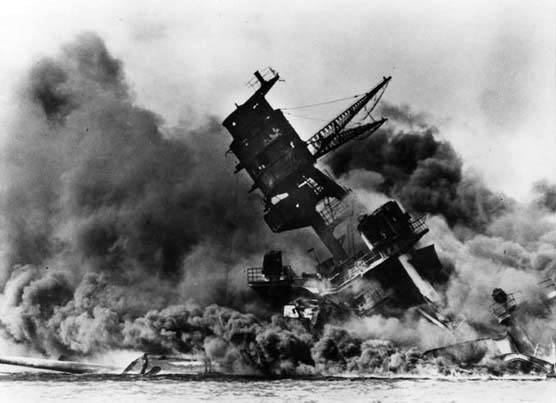 On fire and sinking, the U.S.S. Arizona lists badly to one side after being struck by Japanese bombs during the attack on Pearl Harbor Dec. 7, 1941. The ship remains at the bottom of the harbor where it is a permanent memorial to the servicemen who lost their lives in the attack. (Courtesy photo)

It was a quiet, sleepy Sunday morning in a tropical paradise 2,000 miles off the west coast of America. At 7:55 a.m. fighters and bombers marked with the insignia of the rising sun swooped across the harbor, bombing and strafing. By 10 a.m., the surprise attack was at an end, and so too was the innocence of a generation.

It was 81 years ago this Wednesday, Dec. 7, 1941, that the Japanese attacked Pearl Harbor, a date that will forever live in infamy. After years of peace in an increasingly troubled world, America was instantly at war.

Within just a few hours, American planes had been destroyed on the ground, nearly 2400 lives had been lost with many wounded, and ships of the U.S. Pacific Fleet had been badly damaged or sunk, including the U.S.S. Arizona which lies at the bottom of Pearl Harbor to this day where it is a permanent memorial. The site is one of the few locations where, by Executive Order, the flag flies 24 hours a day from a flagpole attached to the severed mainmast of the sunken battleship.

On the Arizona alone, 1,177 crewmen perished. For the first time in the century, despite warnings which were misinterpreted or delayed, the American homeland had been attacked.

All of us know about Pearl Harbor, and many know at least some of the details. All too often, though, the human face of battle is obscured by the tumult of events, and we may forget that any group is comprised of individuals whose actions reflect on the whole. The accounts that follow are taken from official citations and tell us of some whose courage and sacrifice were examples for all, and who, for their valor, received the Congressional Medal of Honor.

Of the fourteen recipients engaged in the American defense that day in Hawaii, nine were awarded posthumously.

Lieutenant Commander Samuel Glenn Fuqua served on the U.S.S. Arizona. When the attack began, he rushed to the ship’s quarterdeck where he was stunned and knocked down by the explosion of a large bomb which penetrated several decks and started a significant fire. Upon regaining consciousness, he began to direct the firefighting efforts and the rescue of wounded and injured personnel.

Almost immediately there was a tremendous explosion forward, and the whole forward part of the ship was enveloped in flames, which were spreading rapidly, while wounded and burned men were pouring out of the ship. Despite severe enemy bombing and strafing, Fuqua continued to direct the attempt to suppress the fires and remove the wounded and burned from the flames.

After realizing the ship could not be saved and that he was the senior surviving officer aboard, he directed it to be abandoned, but continued to remain on board, directing the rescue of personnel until he was satisfied that all those who could be had been saved. Only then did he leave the sinking battleship.

Rear Admiral Isaac Campbell Kidd was also on board the Arizona, his flagship, as the enemy planes swooped low over the harbor. He went immediately to the bridge as the bombs and torpedoes fell. Also on the bridge was Captain Franklin Van Valkenburgh, commander of the Arizona.

As the attack continued, magazines on the vessel were struck and began to explode and a direct hit killed both valiant officers.

Other ships were also targeted as they lay along Battleship Row.

Ensign Herbert Charpoit Jones organized a party to supply ammunition to the antiaircraft battery of the U.S.S. California after the mechanical hoists were put out of action. He was leading the effort when he was fatally wounded by a bomb explosion. When two men tried to take him from the area, which was on fire, his last words were “Leave me alone! I am done for. Get out of here before the magazines go off.”

Warrant Officer Thomas James Reeves was on the same vessel. After the mechanized ammunition hoists were put out of action, Reeves, on his own initiative, assisted in supplying ammunition by hand to the antiaircraft guns until he was overcome by smoke and fire, resulting in his death.

Machinist’s Mate First Class Robert R. Scott was stationed in the California’s air compressor compartment which became flooded when it was struck by a torpedo. Scott refused to leave his position and continued to operate the compressor allowing the ship’s gunners to continue firing. Scott died at his post.

Lieutenant Charles Jackson Pharris was in charge of the California’s ordnance repair party on the third deck when the first Japanese torpedo struck almost directly under his station. Pharris was stunned and severely injured by the concussion which hurled him overhead and back to the deck. Quickly recovering, he set up a hand-supply ammunition train for the antiaircraft guns.

Twice rendered unconscious and handicapped by painful injuries, he persisted in his desperate efforts to speed up the supply of ammunition and at the same time repeatedly risked his life to enter flooding compartments and drag to safety unconscious shipmates who were gradually being submerged in oil. Lt. Pharris saved many of his shipmates from death and was largely responsible for keeping the California in action during the attack.

During the height of the strafing and bombing, Chief Boatswain Edwin Joseph Hill led his men from the U.S.S. Nevada to the quays, cast off the lines and swam back to his ship. Later, while on the forecastle attempting to let go the anchors, he was blown overboard and killed by the explosion of several bombs.

When thick smoke and rising steam filled the air in the forward dynamo room of the U.S.S. Nevada, Machinist Donald Kirby Ross forced his men to leave that station and performed all the duties himself until he was blinded and unconscious. After he’d been rescued and revived, he returned to his post until he lost consciousness a second time. After recovering again, he returned to his station a third time until he was ordered to abandon it.

The bombs continued to fall and cause havoc. Captain Mervyn Sharp Bennion, commanding officer of the U.S.S. West Virginia, though mortally wounded, strongly protested against being carried from the bridge. Not far away, Austrian-born Peter Tomich was Chief Watertender on board the U.S.S. Utah. Although he realized the ship was about to capsize, he remained at his post in the engineering plant until he saw that all boilers were secured and all fireroom personnel had left their stations. He, too, died at his post.

Nearby, the U.S.S Oklahoma was also about to capsize, and the order had been given to abandon ship. Seaman First Class James Richard Ward remained in a turret holding a flashlight so the rest of the crew could see to escape, remaining at his station to the end as the ship turned over.

The U.S.S. Vestal was moored to the Arizona. The Vestal’s commanding officer, Commander Cassin Young, was blown overboard during the attack. The water between the two vessels was ablaze with oil, and through it, under fire, Commander Young swam back to his ship, which had been hit by several bombs, and moved it away from the burning Arizona, later beaching the Vestal to prevent its sinking.

Commander Young won both the Navy Cross and the Medal of Honor for his actions.

On the same day, Dec. 7, 1941, Lt. John William Finn was stationed at the Naval Air Station in nearby Kaneohe Bay. As enemy aircraft soared overhead, Finn manned a machinegun mounted on an exposed platform. Although painfully wounded many times, he continued to return the enemy’s fire “vigorously and with telling effect throughout the enemy strafing and bombing attacks and with complete disregard for his own personal safety.”

Finn was ordered to leave his post and get medical treatment. Following first aid, although still suffering much pain and moving with great difficulty, he actively supervised the rearming of returning planes. His citation reads “Lt. Finn’s extraordinary heroism and conduct in this action were in keeping with the highest traditions of the U.S. Naval Service.”

The list of brave men cited here is incomplete because not all acts of heroism are witnessed or recorded. Nonetheless, the names and deeds of the individuals known to us should be a living part of our history. Unless previous generations share their experiences with present and future ones, they are likely to be forgotten. If those experiences are tragic ones, not knowing them increases the possibility that they’ll be repeated in the future.

If nothing else, we might very well remember the awful human cost of war.