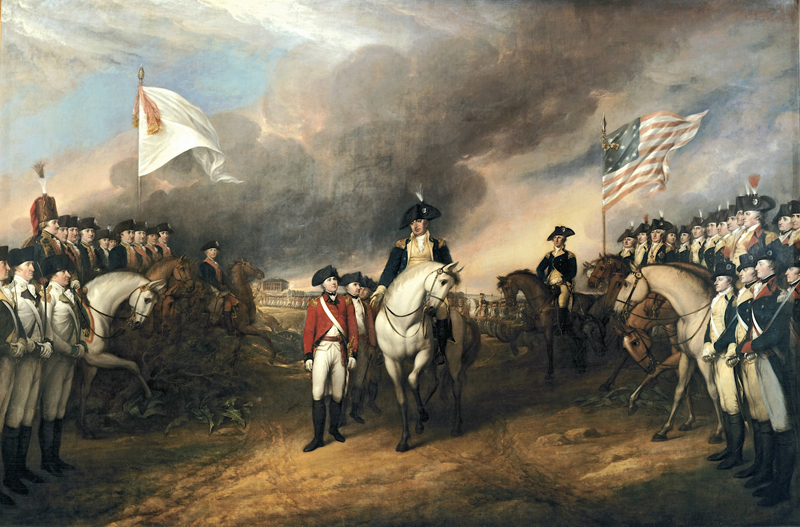 “The Surrender of Lord Cornwallis at Yorktown,” by John Trumbull. Despite the paintings title, Cornwallis did not attend the surrender. In his place, the British were represented by General Charles OHara shown on foot in the center. Incidentally, The American officer on horseback next to OHara is Benjamin Lincoln, not General Washington, who appears on the right of the painting. (Photo courtesy Yale University Art Gallery)

It’s difficult to imagine a time when there were no photographs, particularly during the current age when we are inundated by images of all types produced by ever-expanding media and which could rightly be described as an unrelenting gigantic hurricane (UGH) of visual sensory assault.

In the late 18th century, long before the invention of still or motion cameras, one man began a life-long project of painting the exact likenesses of those who had participated in the events that had shaped the new nation, and he would include these portraits as part of the historic scenes in which these individuals took part. Because of him, these paintings are familiar to many of us, and can be seen in many classrooms throughout the country as well as in the Capitol Rotunda in Washington, D.C. His name was John Trumbull, and he is rightly considered the Patriot-Artist of the American Revolution.

He was born June 6, 1756, in Lebanon, Conn., to a family whose motto was Fortuna Favet Audaci – Fortune Favors the Brave. It was not an idle boast and in fact symbolizes the resourcefulness and steadfastness that Trumbull displayed all his life.

The Trumbulls settled in America about a hundred years earlier, and soon became socially and politically prominent. Trumbull’s father Jonathan was the colony’s Royal Governor and the family home was the center of much activity. At about the age of five, however, young John lost the sight of his left eye, a setback that did not deter him from beginning to draw and paint.

By the age of 18, Trumbull had graduated from Harvard, but not before meeting the famous American portraitist John Singleton Copley at his home on Beacon Street in Boston. It was also the eve of the American Revolution, and passions were high. Trumbull’s father sided with the Americans, the only one of the King’s Royal Governors to do so.

Trumbull himself witnessed the battle of Bunker’s (Breed’s) Hill and served at Crown Point and Fort Ticonderoga in New York where, as a newly-commissioned colonel, he was deputy adjutant-general under General Horatio Gates.

Trumbull, however, was not cut out to be a soldier, and he left the army after an administrative disagreement with Congress, returning temporarily as a volunteer aide-de-camp to General John Sullivan in August 1778. In 1780, Trumbull sailed for London, ostensibly to study with Benjamin West, an expatriate American painter, and also possibly in the role of spy. He was imprisoned for seven months, and then released, arriving back in America in January 1782.

The following year, 1783, the Treaty of Paris ended the Revolutionary War and made America an independent nation. Once again, Trumbull sailed for England to resume his studies with West who had begun to experiment with heroic paintings, notably his “The Death of General Wolfe,” completed in 1770. By depicting the fall of Wolfe, whose death on Quebec’s Plains of Abraham sealed Canada’s fate at the end of the French and Indian War, West employed a centuries-old tradition of religious iconography and adapted it to the pictorial recording of contemporary events.

The approach proved immensely popular, but West could hardly paint scenes from the American Revolution since England had just lost a very bitter conflict with her former colony.

West couldn’t, but Trumbull could, and Trumbull knew about revolution because he had served in it. His plan (which ultimately developed into a lifelong project) was to produce a series of paintings recording the pivotal battles and political events of the revolution, exhibit the paintings in America’s principal cities, and sell prints of each work by subscription to the public.

The plan eventually called for eight historical paintings. Arranged chronologically, these images would be a visual account of a remarkable political and military development: the eight–year struggle for separation from one of the most powerful nations on earth, and the creation of an independent republic. The paintings, however, were never meant to be factual records.

Instead, Trumbull and other artists of his time held that there was a higher, more ideal truth that was far greater than a literal picture. Even though Trumbull took great pains with details, visiting the scenes of his paintings, carefully noting the color of uniforms and flags, and sketching the likenesses of those involved, the result was an authentic yet idealized image, which symbolized not only the personal courage and individual heroism that helped create the events, but also set the standard of conduct and inspiration for the future.

It all seemed a natural undertaking for the former soldier and talented artist. Trumbull had a unique advantage as well because through his military service and family connections, he knew many of the Founding Fathers personally, including Washington, Jefferson and Adams. In an age when a likeness died with the individual unless a portrait had been commissioned, Trumbull reasoned that many of the participants in this great drama would soon be gone, and an important part of our history would be gone with them. He also reasoned that his paintings would be widely admired by his countrymen and that his efforts would be well rewarded.

In that he was disappointed because even by the early 19th century, Americans were already beginning to lose interest in their own past. Because Trumbull’s efforts did not achieve the financial success he’d hoped for, he occasionally engaged in other activities, always returning to his painting.

In 1794, he traveled again to Europe as secretary to John Jay who was negotiating a treaty with the British. For the next several years, Trumbull served in several other diplomatic capacities and speculated in the world of business, returning again to his art around 1800.

After a lean period, Trumbull was commissioned to paint large copies of four of his paintings: “The Declaration of Independence,” “The Surrender of Lord Cornwallis at Yorktown,” “The Surrender of General Burgoyne at Saratoga,” and “The Resignation of General Washington” for the Rotunda in the nation’s Capitol where they have been on permanent display since 1826.

Trumbull settled in New York where he began to prosper as a portrait painter and became president of the American Academy of the Arts, but again, his debts increased while his income dwindled. Near the end of his life he wrote his autobiography, the first by an American artist, and he donated his paintings to Yale University to be exhibited permanently in a gallery of his own design in exchange for a lifetime annuity. By 1843, the year of his death, Trumbull had created a prolific body of work, not just his series of historic paintings, reproduced in various sizes, but also miniatures and landscapes as well.

Despite setbacks and discouragement, Trumbull persevered in painting what he felt was important regardless of popular opinion. He knew memories and recollections would fade, and before they did, he wanted to preserve on canvas the tumultuous period of our independence.

Now, Trumbull’s images are indelibly etched on the national memory; for they are what we see when we envision the historic events so many years in the past. He captured the faces and the details of each event and arranged them in a dramatic heroic setting; one that may not have occurred in real life but which nonetheless inspires and symbolizes the spirit of a distant but vital age.