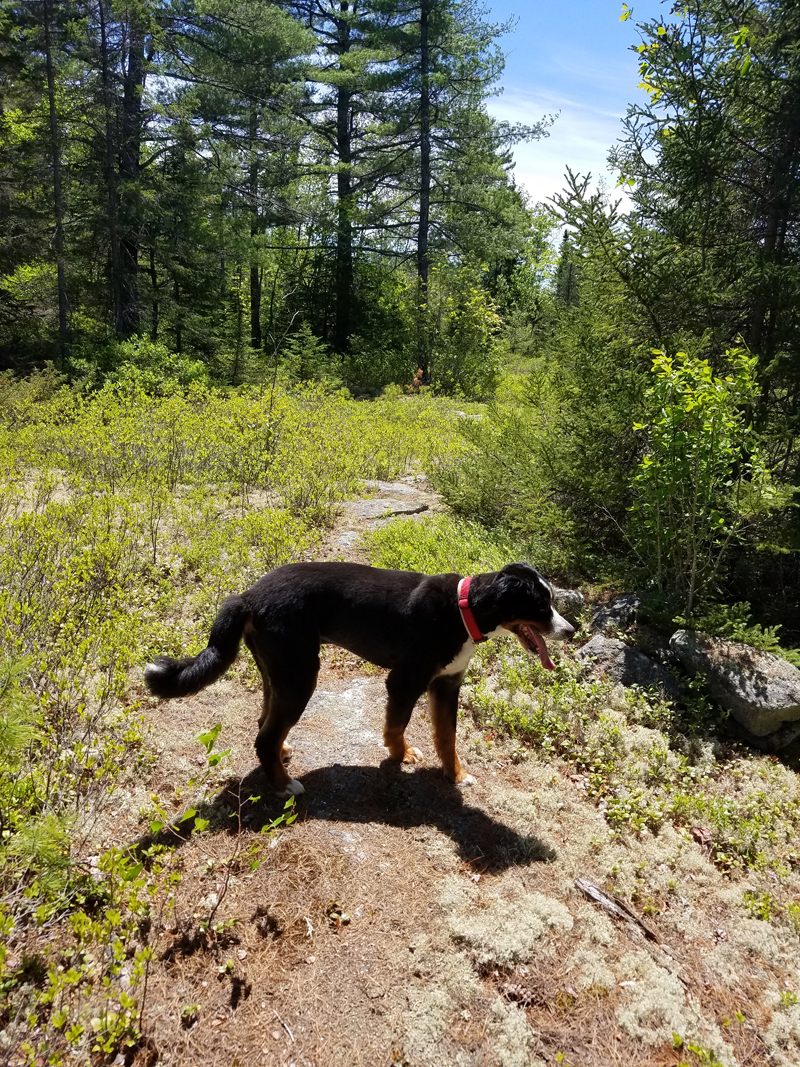 I admit that I tend to overreact when I see that something has befallen an animal that I’m pet-sitting, anything from hairballs to heat stroke. There are a few reasons for this. No. 1: I love all animals and I don’t want to see any animal in any sort of pain. No. 2: it’s not my pet and someone is paying their hard-earned money for me to care for their pet. I don’t want to feel that they’re not getting their money’s worth. And No. 3: I have worked at several veterinary clinics and I have seen firsthand what can happen if what starts out as a manageable medical situation gets out of control.

(Spoiler alert: This “tail” has a happy ending.)

Recently, I wrote an article for the upcoming “Outdoors” issue of Lincoln County Magazine about hiking with my dog friend, Toby. While I’ve taken him for many walks before, this time was different. I was unfamiliar with the location, I didn’t take into account that there might not be shade, and I didn’t realize just how warm it would be outside. I did bring along my phone and some water for him, but we got lost on the trail (and no amount of phone calls would fix that).

Well, in all honesty, I got lost – I’m sure Toby would have found his way back fairly quickly if it wasn’t for the directionless fool of a human with him.

When I finally did find my way back in the direction of my car, Toby started to act differently than he had on any other walk we’d taken. He flopped down into a dried-up puddle and lay there for a couple of minutes. He didn’t run ahead of me when we neared the car. I cranked the AC and made sure he drank the rest of his water, but he didn’t stop panting; usually after a hike, he falls fast asleep in 30 seconds once we get back in the car.

I admit this is when I started to overreact. He was hot. I see that now. I was hot, but I wasn’t dying and neither was he – but Toby is my buddy, above all, and he seemed uncomfortable. I stopped at a house and used the garden hose to douse my dog friend in water. He kept panting. I took him back to my house and made him lie down on the cool linoleum floor. He was still panting.

I called the very kind and helpful people at Midcoast Animal Emergency Clinic, in Warren, and they told me, as gently as they could, that if he was in fact overheated, he could die. I went into double panic mode at this point. We got back in the car and raced over. Along the way, I called his owner, and apologized profusely for breaking her dog. She (very nicely) indicated that perhaps I was overreacting and that he was probably just hot.

When I arrived at the clinic, Toby started his happy whine. He does this whenever we show up anywhere; he doesn’t care where it is – he loves everyone! By the time we got inside, he had stopped panting and was wagging his tail. The staff took his temperature and he was only slightly warmer than he should have been. We sat quietly (Toby actually fell asleep at this point) in a room for about 10 minutes, and when they took his temperature again, he was normal.

I am not a good enough writer to adequately convey the sense of panic that took hold of me when I got that first thought that perhaps I’d caused injury to my furry companion. However, looking back, I can see that if I had remained calm in the first place, things would have been fine and I wouldn’t have spent two anxiety-ridden hours worrying about what was essentially a normal reaction to being warm.

If I have taken anything from this experience, it’s that it doesn’t help to panic, and a couple of deep breaths, lots of water, and some actual planning can prevent most disasters, real or imagined.