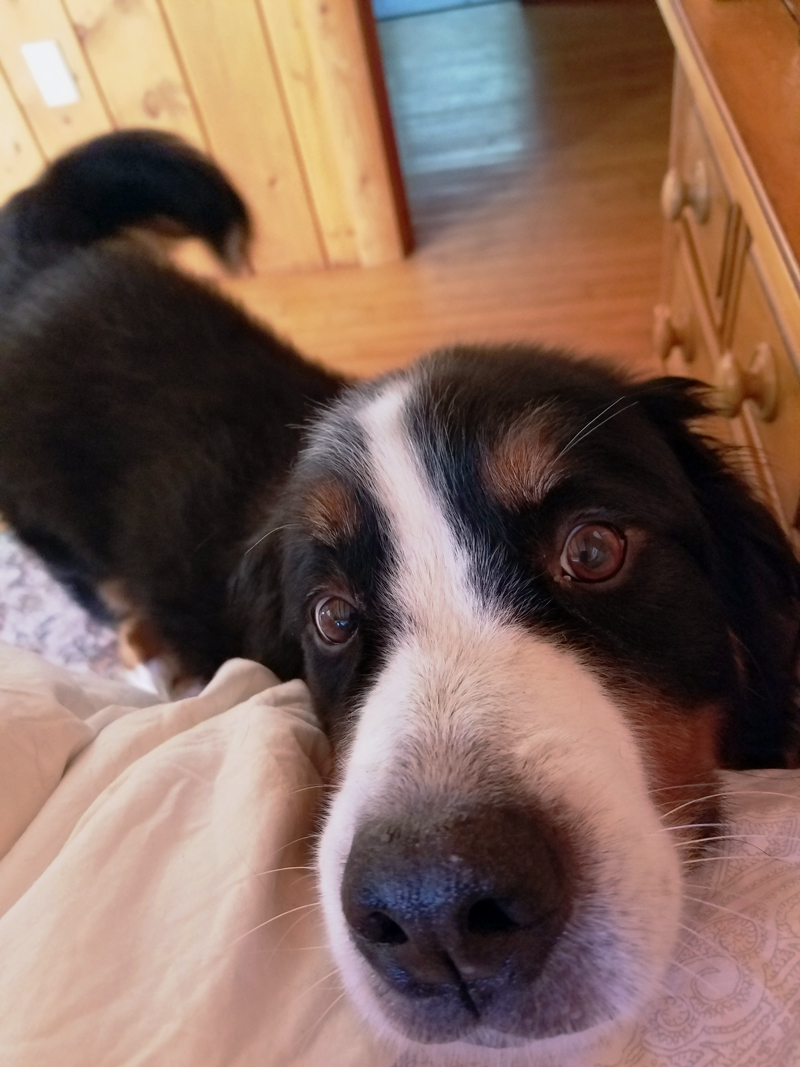 How could I possibly say no to this face? (Sarah Caton photo)

I have found myself saying that many times over the past two years.

There was the time his leash broke and I had to call him back, and he came. There was that time when I dropped chocolate on the floor and I told him to leave it, and he did. There were the 1,000 other times when he amazed me with his ability to know what I wanted, without my ever having to say anything.

Toby was 5 when I met him. There were times when I had spent more time pet-sitting at his house during any given month than I spent at my own. I got to know all of his habits and quirks, and he could read me well enough to know when I was leaving without him and when I intended to take him for a ride, even if I pretended I wasn’t going to.

Toby’s favorite spot was on the bed with me in the evenings; his teeth would chatter and he would make weird doggo-purring noises when he finally got comfortable at my side. Of course, like any good dog, he would lay perpendicular to me on the bed, taking up the maximum amount of room possible. Being 80 or so pounds, he took up 80 percent of the bed when he did that. But he was happy, so I wasn’t going to complain.

I found it nearly impossible to say no to him – I mean look at that face! He would get treats for doing nothing but looking at me. I would get out of bed even when I didn’t have to because he wanted a treat, or just wanted to be in a different room but wanted me with him. Once, I took him for a ride just because he looked so sad that I was leaving again, even though I’d only come by to walk him at lunch.

His absolute favorite thing to do was go for a walk in the woods. Toby was one of the happiest dogs I’ve ever known, but nothing made him happier than a romp through the woods. Seeing him run through the woods and then race back to my side, full gallop, with tongue hanging out and big happy eyes, never failed to make me smile.

And I would very much like to do all of those things with him again. Except that I can’t. Much like the turn of this article, Toby’s life ended unexpectedly on a Monday in October. When it was discovered that his pain was unrelenting and incurable, his owners made the merciful decision to end his suffering.

His owner sent me several texts to tell me about this, and before I had even received them all, I was dialing her number. As we cried together on the phone, we talked about what a happy boy he was and how much we both loved him and would miss him.

What I didn’t tell her is that I always let Toby lick the spoon I used to get his canine brother’s food out of the can. I didn’t tell her about the bag of special treats I kept in my car just for him, because he frequently had an upset stomach, and I didn’t want to make it worse. I didn’t mention I’ve taken more pictures of him than I have of my own cat. I didn’t tell her Toby was the closest thing I’ve had to having a dog since my own dog died.

I don’t know where dogs go when they leave us. I hope that it is someplace where Toby can run through the woods all day and chase those squirrels he was always trying to catch. I hope that it is someplace where he will be welcomed with open arms and lots of treats, and where they will always say to him the thing that I know he heard so many times during his entire life: