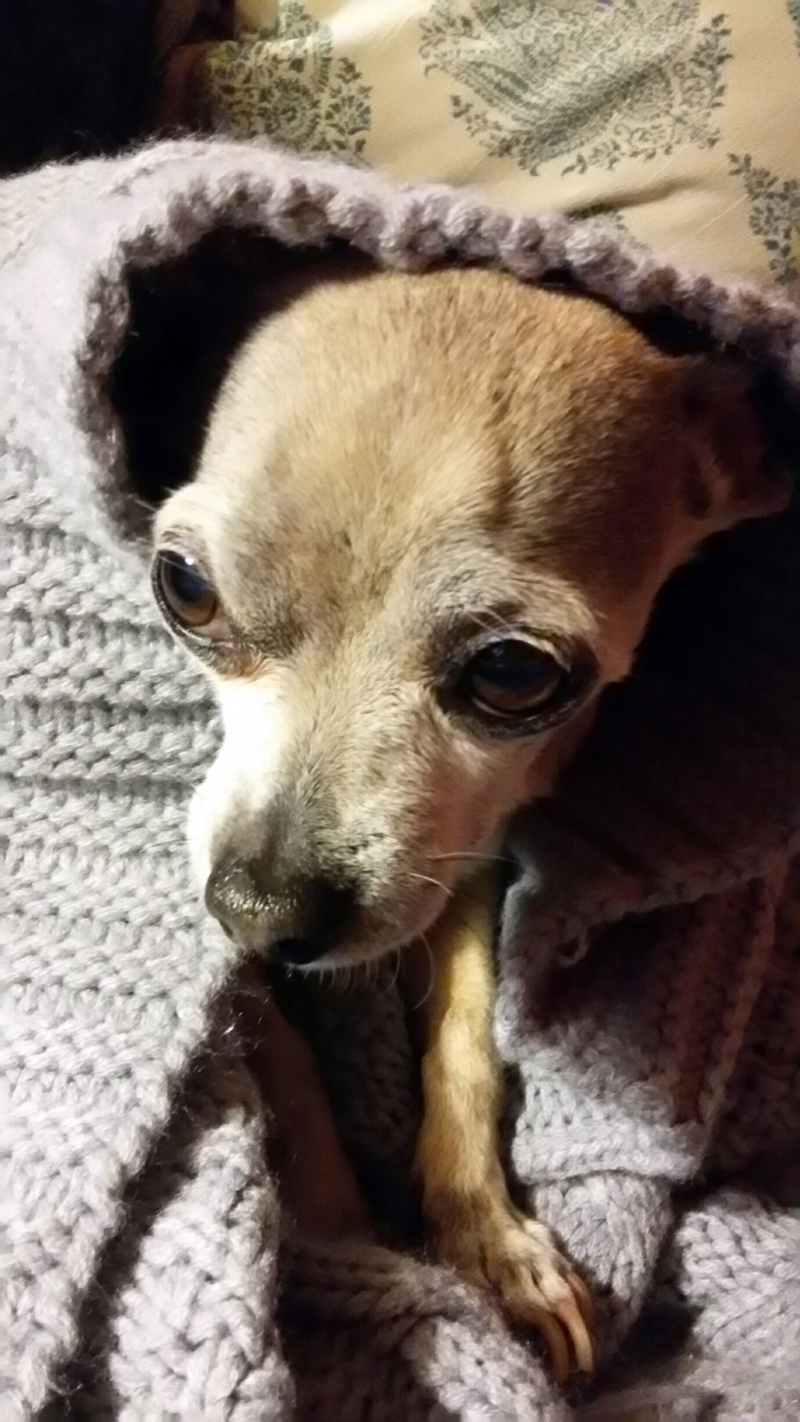 Speedy shows off his beautiful eyes and his favorite pastime.

I hope you’ll indulge me for a few minutes as I write about my favorite Chihuahua, because he’s not getting any younger and I wanted to write this in the present tense, not as a memoriam. It’s OK, though — as I write this, he’s sitting in my lap watching me type.

It’s amazingly easy to get attached to a dog that isn’t yours. Or maybe it just is in my case, I don’t know. I can tell you that Speedy won me over from the first time I went to visit him. He had crazy energy and ran around in circles, as if I were the most exciting person in the world.

I’m lucky enough that I get to visit with him about once a month, usually for at least a couple of days. He still gets just as excited to see me as the first time I visited him. Now, I’ll grant you that he probably does this for everyone, but, as I’m his pet sitter, there is no one else around when I visit him, so it seems like he thinks I’m special.

His favorite activity is curling up in blankets. Or towels. Or clothes I may have left on the floor. Anything soft, really, and he’ll make it into his own private fortress in under a minute. If we’re on the couch and I haven’t yet gotten around to pulling a blanket over myself, he will insistently stick his head under it until I move it to where he can burrow into it, at which point he will make happy little grunting noises until he gets it just right. If I should foolishly move it so that maybe I can have some of the blanket covering me, he starts all over again. He never seems to get mad at me for moving it on him, though. I think he secretly likes that he gets to burrow into it twice.

Speedy is the kind of dog one can let out into the yard and know he won’t wander far. We often take short walks up the driveway and across the street. When we get near the end of the driveway, he seems irritated that I pick him up to cross the busy street. He would probably just wait for traffic and then cross, but I’m not going to test that theory; I’m fine with him being exasperated with me if it means he’s safe. I swear he rolls his adorable little eyes at me, though.

He has great big eyes that look straight into your heart (well, they’re big in his head; in actuality they’re smaller than dimes). A couple of times I’ve been at his house when I had a migraine, and Speedy snuggled up next to me and didn’t leave my side until I felt better. He also uses his eyes as some sort of mind-control device. He’ll just stare at me until I cave and give him a treat (this happens frequently).

Despite being older and having arthritis, he’s still quite agile. His large, goofy canine “brother” seems to have no idea how much space he takes up — and being a Bernese Mountain Dog, it’s a lot! He never notices that Speedy is nearly underfoot. Fortunately, Speedy knows this and dances out of his brother’s way with ease. He also jumps over door thresholds as if he were some sort of Olympic hurdler, stopping at the entrance to get his bearings before making his heroic leap.

Speedy still runs around in circles, too, but only when it comes to food. Meal times are more exciting than curl-up-in-a-blanket time; he suddenly thinks he’s a puppy. He’s 15 years old, but if you only saw him at breakfast time, you’d think he was in the prime of life. He whips around in circles that would make a centrifuge nauseated.

Although his energy seems boundless, at the end of the day Speedy still wants nothing more than to curl up and sleep in a big pile of blankets. He has his own bed with his own Speedy-sized blankets. But he never wants to sleep in them. So he uses his mind-control stare until I pick him up onto the bed I’m supposed to be sleeping in, and he begins the process of getting comfortable under my blankets. I can’t complain though, because once he’s comfy, he doesn’t move all night. If I slept as well as he did, I’d probably have his energy, too.

A day spent with Speedy is a day well-lived, and my wish for you all is that you have a dog like him at least once in your life.

“Dogs are not our whole life, but they make our lives whole.” – Roger A. Caras