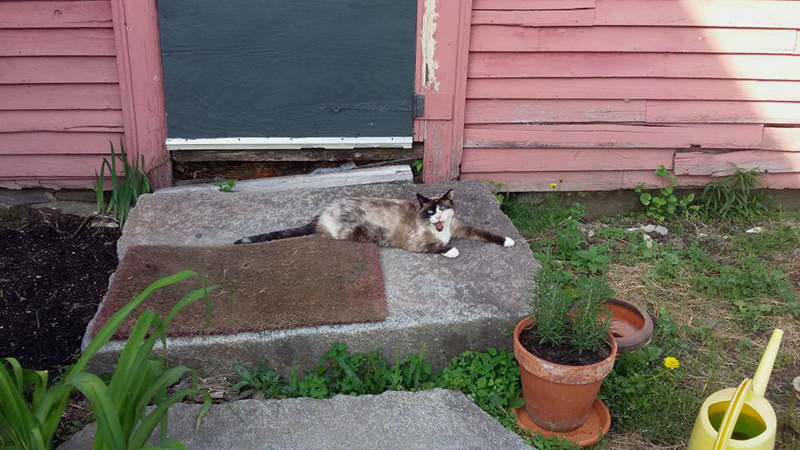 Kismet, enjoying life on the other side of the door. (Sarah Caton photo)

Recently, a friend asked me about whether or not I thought he should let his cat go outside. I gave him answers that sounded a lot like what is here below, but I thought I’d share them with everyone, in case you’re thinking about it, too.

Let me just state for the record that this is a personal choice and I’m not advocating for it or against it. If that’s what you feel is appropriate for your cat, that is your choice, and while I think that anyone should get advice if you’re thinking about it, what you ultimately decide to do is up to you.

With that being said, I feel it’s OK to let my cat go outside. But I didn’t just chuck her out the door and yell, “Good luck, Kismet!” I did it in steps, and if you’re considering letting your cat out, here are some thoughts and tips for facilitating that process.

First, weigh the factors of why you’re going to let your cat outside. If you’re thinking of getting a cat but don’t like the idea of a litter box, a cat may not be for you. If the only reason your cat is going out is because it’s inconvenient for you to keep her in, maybe get a different pet. If Purriah Carey is staring out the door and tries to dash out whenever you open it –she’s trying to tell you something.

My cat spent several years not even going near the door. When my other cat died, she was suddenly interested in what was beyond the door. It wasn’t until then that I considered outside as an option for her. Prior to that, she didn’t want to go out, so there was no way I was going to force her to do anything she didn’t like (this, of course, doesn’t apply to going to the vet’s office, but I think you take my meaning).

Second, do your cat (and everyone else) a favor – make sure your cat is up to date on vaccines. Rabies is required for all cats, both indoor and out; there have been several confirmed cases just this year in Maine. Other vaccines that are recommended by veterinarians are distemper (which protects against several diseases in one shot), and feline leukemia, which is transmitted by saliva (and other bodily fluids) and is not the kind of leukemia humans get. There are other recommendations and testing that your cat should be current on, but that is a discussion for you and your veterinarian to have.

Also — and I can’t stress this enough — don’t let your cat out until it has been spayed or neutered. This will cut down on behaviors such as fighting or running off to find a mate. Furthermore, according to the ASPCA, approximately 860,000 cats are euthanized each year. Please don’t add to the already overflowing population of unwanted animals.

Once you and Leonardo DiCatrio are ready to go outside, make sure you have time for several days in a row to spend with him while he’s out. Establishing a routine early will make it easier later when you try to get him back inside.

I found that if I went out on the deck with Kismet for 10 minutes at a time and we just sat there together, she became more comfortable each day and explored a little farther, but when I got up to come in, she ran back to the door. Letting your cat know that you’re not just going to abandon him outside will help make both of you more comfortable with the idea, especially if you’re still hesitant but want him to be able to go out. Most days my Kismet just sits on the deck; she just wants to be on the other side of the door — she’s not out looking for trouble.

I highly recommend you make sure your cat comes inside in the evening. Yes, Fuzz Aldrin would prefer to be out on the prowl at night, but so do other creatures that would most likely find him a tasty snack. Cats are highly adaptable; they will adjust to the routine you set. They will try and push their luck, because they’re cats. But if you are consistent early on, they’ll most likely continue that pattern without too much complaint (though I bet if my cat spoke Human and you asked her, she’d give you an earful).

Make sure your cat understands the concept of moving cars. This may sound obvious, but I’ve seen a cat stare down a car in the middle of the road as it was going by. When you’re outside with Pawris Hilton, make sure she doesn’t think she can play chicken with a car. See how she reacts to a moving vehicle, and if she runs away, chances are she’s not going to be hanging out in the street, and has enough “street” smarts to keep herself safe from vehicles.

Finally, realize that you are letting your cat out into the unknown and you will not have any control over what happens to him out there. I’ve had a cat come home bleeding; my brother had a cat come home without an eyeball. It’s not the cozy life they have inside – there are dangers — but if you’re willing to accept that risk, and it makes your cat happy, take all the precautions you can, and then open the door to the great wide world.