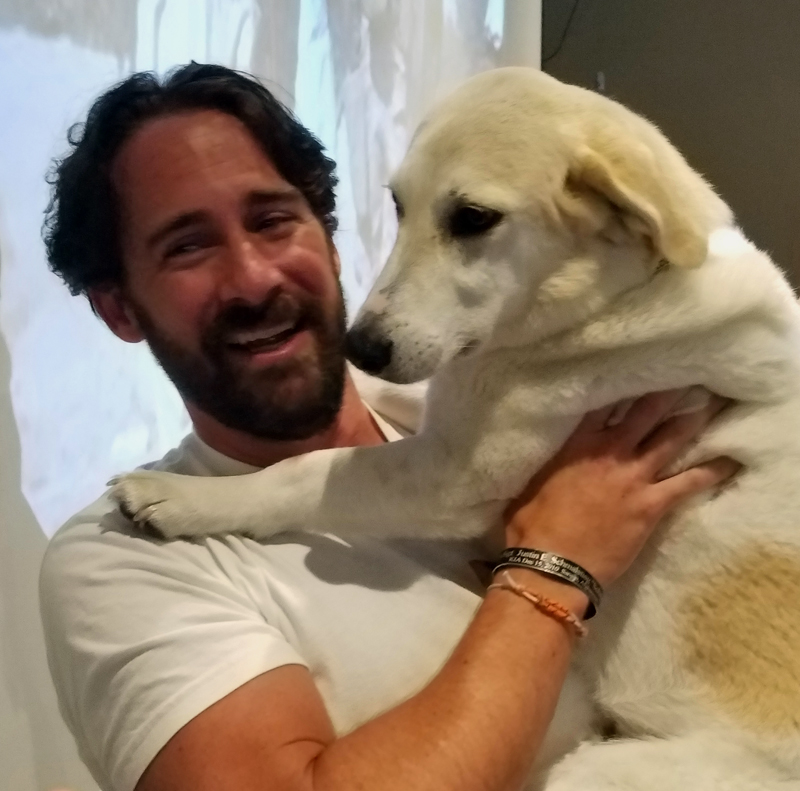 “Craig loves his dog.” I looked down at my notes, and discovered that I had scrawled this down, and then underlined it several times.

I had gone to a Chats with Champions talk at Skidompha Library last Thursday, Aug. 8, where I had met both Craig Grossi, who was speaking, and his dog, Fred. It was probably the most unnecessary note I’ve ever written, considering the man risked getting in trouble with the military and then smuggled his dog into the United States just so they could stay together. If that’s not love, I don’t know what is.

Fred is not like other dogs I’ve met. For one thing, he has the legs and coloring of a Pembroke Welsh Corgi, the head shape and fur of a German shepherd, and the personality and bay of a hound. When asked what breed of dog Fred was, his owner replied, “He’s a Fred.”

He is the most laid-back dog I’ve ever met. While we listened to the story of how Craig and Fred became best buds, Fred took a nap on the floor. Which would have seemed normal, except that there were about 100 people and a couple of other dogs listening to Fred’s owner talk about how they ended up together.

Fred’s beginning was less than auspicious. The pair met while they were both in Afghanistan. Craig was assigned there as a Marine; Fred was a stray dog just trying to survive. The two became fast friends over some beef jerky, and they have been together since, with the exception of about four months between the time Fred arrived in the States and when Craig finished his tour of duty.

Craig and Fred now travel the country, along with Craig’s girlfriend, Nora, and Fred’s “girlfriend,” Ruby, talking about their rather unusual beginning, how they saved each other, and how they help other veterans adjust to civilian life and let them know they’re not alone. To be fair, Craig does all the talking and Fred gets all the attention, but it seems to be a good partnership just the same.

Craig and Fred’s message is that of “stubborn positivity” – wagging our tails even when we have no reason to do so, just as Fred did the first time he met Craig. Here was a half-starved, insect-covered dog who probably hadn’t had a whole lot of positive human interaction, and his first reaction to Craig was to wag his tail. Craig admits this is what won him over. Instead of growling or running, Craig heard a gentle “thump, thump” and saw telltale puffs of dust from a moving tail. Craig tells the story of their beginning with humor, humility, and obvious adoration for his four-legged friend.

You can read all about their amazing partnership and their life together in Craig’s book, titled “Craig & Fred: A Marine, a Stray Dog, and How They Rescued Each Other.” Learn more about them online; their website, fredtheafghan.com, gives you an option to sign up for their newsletter, or you can check out Fred on Instagram — #craigandfred — where you will find lots of striking pictures of Fred and his family.