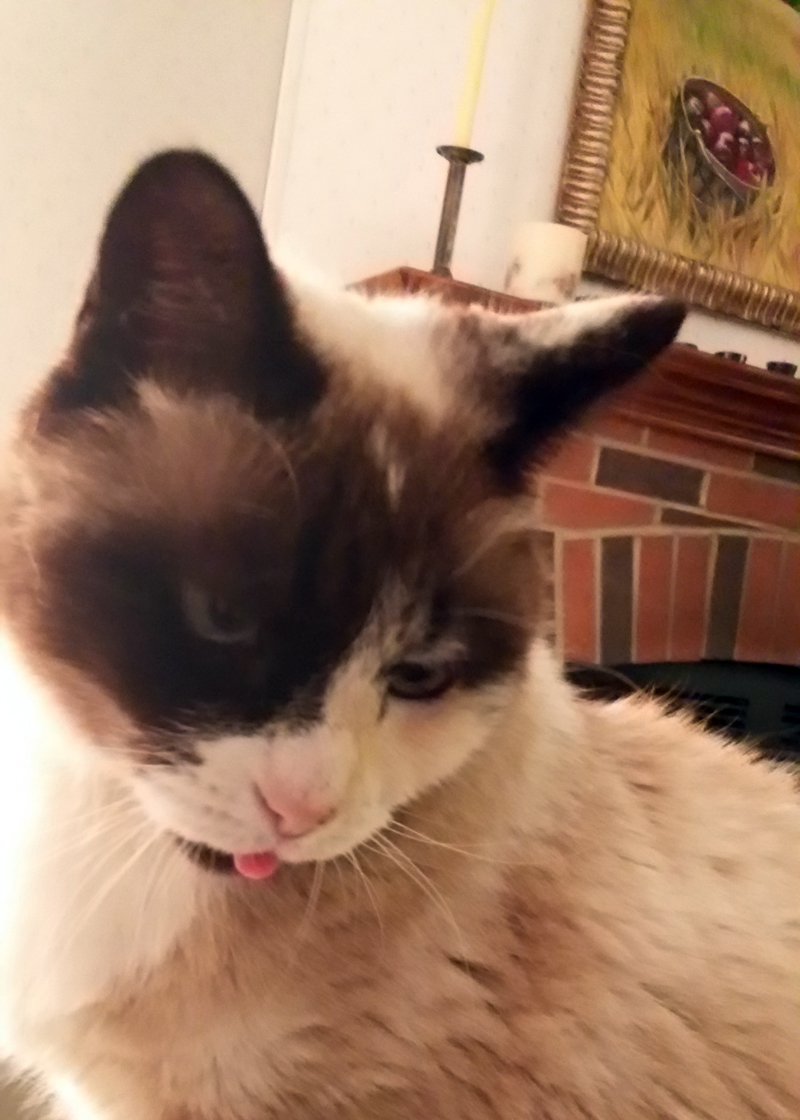 Clients — and potential clients — often ask me what I do with my cat, whose name is Kismet, while I’m busy taking care of their pets at their house. I tell them it’s not a problem because I think she likes my roommate better than me, anyway. I’ll try not to go on and on about Kismet, but let’s face it — anyone who has ever loved an animal could write a 12-volume set about their pet. Here are some of the highlights:

Kismet arrived on my lawn roughly 12 years ago when she was about four weeks old. Someone had clearly dumped her into the cutout in front of my basement window, as there was no way such a tiny kitten could have made it from any of the neighboring houses and across the busy road by herself. I awoke in the early evening after a nap to an extraordinarily loud, extremely sad yowling.

Having previously worked for the local veterinarian, I called her up and asked her if I could bring the kitten in first thing in the morning to have her evaluated. I tried not to get too attached, in case she had some terminal illness, but it was already too late — my new cat had already found me and I was determined to keep her. Luckily, she didn’t have anything wrong with her then, and the same is still true.

After her initial yowling, I think Kismet broke her meower (no, this is not the technical term; I’m afraid I don’t know what is). She didn’t make a sound for a couple of years. Being part-Siamese, this was very unusual. Have you ever met a quiet Siamese? I haven’t! Eventually she found her voice, though, and now she never stops making noise. From the time I wake up in the morning until I go to sleep at night, Kismet follows me around and meows.

Perhaps “follow” isn’t the right word. She’s not actually behind me — she herds me. She walks in front of me if I’m not already going the way she wants me to, all the while yowling. She does this to my roommate, too, who willingly obliges her. This may explain why my cat prefers her company. I haven’t yet come to terms with the fact that Kismet is in charge of the household and we are merely her staff. My roommate will open the door for Kismet, who will go out, wait for the door to be closed, then meow to come back in.

Even though she constantly wants attention, Kismet is not much of a cuddler. She’ll sleep near me, but if I try to pick her up or pet her for more than 10 seconds, I get swiped at, so I’m always mildly surprised when I visit a cat who actually wants to spend time in my lap. Kismet does have that sixth sense that all animals seem to have, though, because when I’m sick she won’t leave my side, even if it means she has to endure being petted for half an hour straight.

Kismet also has some other quirks (which, I guess, given that she’s a cat, are just her personality traits). She “squeaks” when she gets really excited, such as when I just get home from being gone for several days. I think this may have something to do with her previously broken “meower,” but I’m not sure. She also sticks her tongue out every time she’s happy or mad. Since she’s always one of the two, I have lots of pictures of her with her tongue out. I think this could also be because this is my favorite thing about her – she gets so involved in what she’s feeling she doesn’t realize how silly she looks.

Kismet has never been away from me for more than a week without at least a visit, and even though I hate to leave her, I find it’s much easier to leave when I know that she’s got someone who cares about her almost as much as I do. It’s the philosophy I run my business by — that when I arrive to spend time with your pets, I’ll be caring about them almost as much as you do — but I’ll save the “encyclopedia” writing for you.