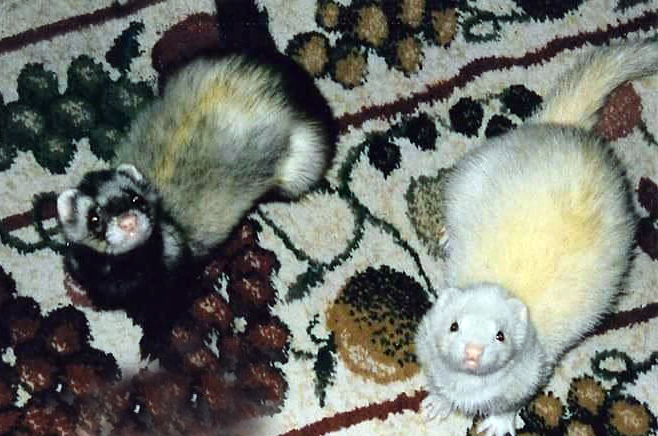 Tre’ and Quinn display two common colors of ferrets (sable and dark-eyed white) while planning what mischief to get up to next.

National Ferret Appreciation Day is April 2. Of course, as a ferret lover, I think every day should be National Ferret Day, but I know not everyone agrees with me. Some of those disagreements come from misunderstandings about ferrets. I’ve heard everything from “they stink” to “they bite faces.” And while every person’s ferret experiences may be a little different, those who take the time to get to know a ferret will find them to be wonderful pets.

Firstly, I will admit before I write anything else: they have a smell. The Latin name for ferrets (Mustela putorius furo) translates to “smelly little thief.” The scent glands on ferrets purchased from a commercial breeder in the United States (Marshall Farms) have been removed before the ferret leaves the facility. That being said, they are members of the mustelid family, which means they’re going to smell a bit musty no matter what. My ferrets got a bath about once a month, which is probably more frequently than some people’s dogs, so I think saying they stink is more of an excuse to not like them than to actually admit it’s because they look a little different.

Next, it should be noted that they are not, in fact, rodents. Another reason that people tell me they don’t like ferrets is because they’re stinky “rodents.” As mentioned above, they are in fact, mustelids, which means they’re the same family as minks, stoats, and, though there is some debate, skunks. Animals that are actual rodents include guinea pigs, hamsters, and beavers. And though not many people have beavers for pets, I suspect there are lots of guinea pigs in people’s homes, and not one of those people was troubled that it was a rodent.

Ferrets are intelligent, trainable, and can be cuddly. Much like cats, they have a personality when you get them, and no amount of holding will make a non-cuddly ferret into a love bug. Because they are so intelligent, it’s important to make sure you keep an eye on them if they are not in their enclosure. They have a tendency to hide in spaces you’d think too small for them to get into. Mine would flatten out under our stove drawer and then climb into the drawer to sleep. I don’t believe there was even an inch of clearance, but those little buggers squeezed in just fine!

These furry little thieves also like to stockpile items. Typical choices include socks, stuffed toys, other ferrets, potatoes, or anything else they can get into their mouth. Finding eight unmatched socks and the remote under a couch is not an uncommon occurrence.

Ferrets have been domesticated for about 2,500 years – they were originally bred and kept to kill off … well, rodents. They were a combination of two types of polecats (not to be confused with the colloquially known “polecat” that is used as slang for skunk). They gained popularity in the United States in the late 20th century due to the loosening of restrictions on keeping them as pets.

Ferrets sleep between 14-18 hours per day, so while they are not high-maintenance pets, it is important to let them play during the hours they are awake. As they are highly intelligent, they can adapt to a schedule, so hopefully their awake time and yours can eventually coincide.

These fuzzy bandits do make noise, but you have to be lucky enough to find them in a highly elated mood before you hear it. They make a “dooking” noise when they are very excited – typically when playing. The closest thing I can compare it with is a goose honk. It’s typically not very loud, but it is unique. Like cats, some make more noise than others, but you’ll always know when your ferret is really happy, because he’ll sound like a miniature goose.

The one downside to ferret ownership is their relatively short life span. Ferrets typically live six to 10 years, though I’ve never met one who made it to 10. They seem to live life to the fullest for all of the time they are alive, and apparently that takes its toll on their longevity.

Ferret ownership is not for everyone, but for anyone who is willing to learn about what fabulous pets they do make, they will be rewarded with a fun and spirited companion, who will always be able to make them laugh with their goofy antics and strange dooking noises.