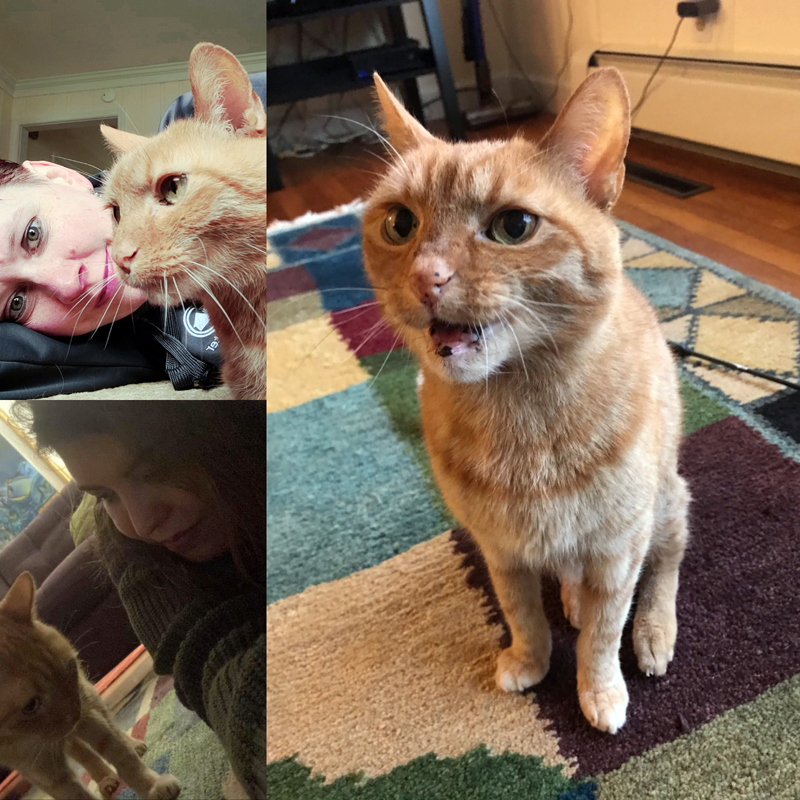 All Paws Pet Sitting’s Sarah Caton, Maia Zewert, and Julie Greenleaf all enjoyed floor time with Pixel and have the photographic evidence to prove it.

As I have become busier, I have found myself adding to my list of employees. With the busier list of dates I need to be gone, the two awesome ladies who work for me sometimes take on jobs that I would be happy to do myself, but don’t have the availability in my schedule for.

There are a few people who have met and had all of us pet sit for them, but this is the first time that a beloved pet that we have all spent time with has made his way over the Rainbow Bridge. Because we all love him and are all saddened by his passing, I am sharing my column this month with the two of them. I hope you will indulge us as we say goodbye to our favorite orange boy, Pixel.

Maia: Pixel was my introduction to All Paws Pet Sitting, and I could not have asked for a better start. He was a wonderful conversationalist, always willing and able to tell you exactly what he was missing or wanting, whether it be dinner, to be let outside, or just some lap time and attention. For the most part, Pixel liked his heated bed more than he liked spending time with me, but after a nightly sip of water from his glass, Pixel would park himself on my lap for a few episodes of whatever I was watching.

My final stay with Pixel was in late April when I was recovering from a broken hand and some low spirits. Sarah informed me Pixel was moving slower and sleeping more, so the job wouldn’t be too much to handle one-handed. Nobody told Pixel this, however. He enjoyed cuddling with you on your lap while you used both hands to pet him. My injury did not deter his desires, and we spent most of the weekend in a chair, watching Netflix, him purring away without a care that one of my hands was wrapped in a brace. He was happy, and that brightened my mood considerably.

I was looking forward to another few days with Pixel this month when Sarah informed me he had made the leap over the Rainbow Bridge. Although I am saddened by his passing, I know he had a wonderful life and was loved by many, including me.

Julie: I was sad to learn Pixel had crossed the Rainbow Bridge. I have watched him a few times recently when his parents were away. I was always greeted by his distinct meow. The minute I sat down on the couch he was in my lap for cuddles. He was a special boy and I will truly miss him.

Sarah: When I met Pixel, he was already an old man. He may have been skinny and slept a lot, but he definitely had personality! His meow could be heard through closed doors or across the house, and there was definitely no ignoring him if he wanted something. Mostly, it was love, which was, of course, super easy to do, but it did make any other activity (using the phone, reading, eating) nearly impossible, as his preferred location was squarely in my lap, with both hands petting him.

Time at Pixel’s house meant I was either doing my own thing because he was asleep or being a warm, squishy place for him to knead while I thought about what I might do next time I was allowed up. This is, of course, what being a pet sitter is all about, but it was a clear dichotomy at his house, and one I looked forward to every time I was able.

My last visit to my orange pal’s house made it clear that squishy lap time was especially precious, and I am glad I was able to spend as much time there as I did. I know that he was lucky enough to have the best life possible thanks to his owners, and I feel lucky that I had the privilege of knowing him.