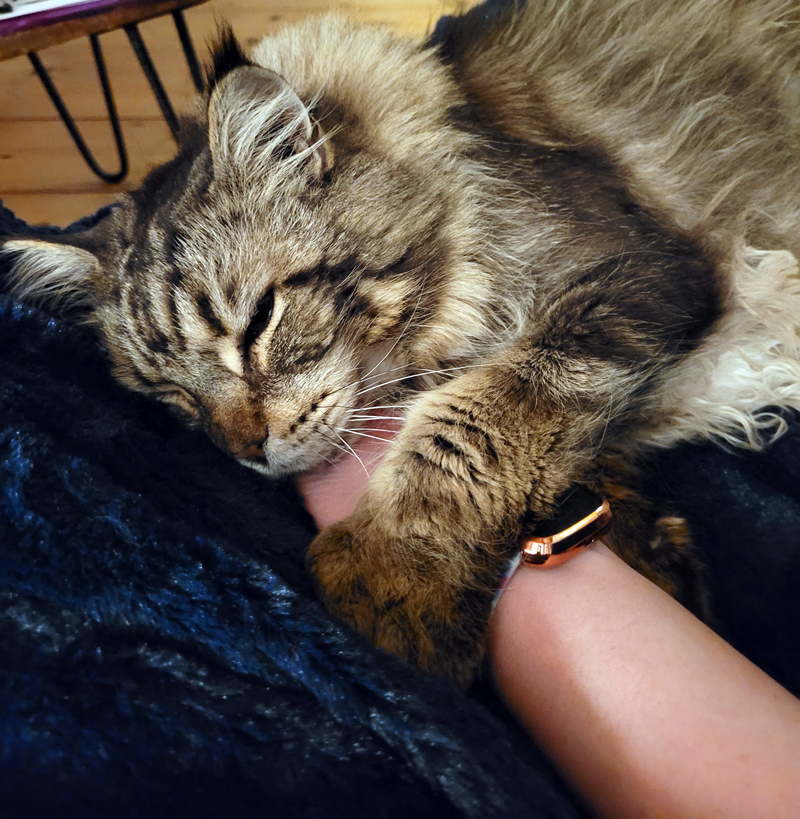 When I had to say goodbye to my Kismet in March, I had some consolation in the fact that when I left the vet’s office, I got to go back and spend the weekend with my buddy, Zeeba. Zeeba kept me company as he normally did by sitting on the couch near me purring (or, even more loudly, snoring) the hours away. He was kind enough to let me hug him while I cried, and I know for sure that I would have cried longer and harder if I hadn’t had him to keep me company.

In October, Zeeba died very suddenly, and this time, I had no kitty waiting for me at home to cry to, which I think made his passing even worse for me than my own kitty’s.

Zeeba was a personality and half’s worth of cat. He was either super lovable, or, if startled or I brushed his butt with too much pressure, as cranky as you would expect an old man to be. He was a big sturdy boy who just happened to limp when he walked, though I don’t believe he was in any pain.

His favorite pastimes were snoring (of course) and eating. If I was in the kitchen, and he didn’t have any food in his dish, he would ask me for it. His meow changed over time, and near the end of his life, it was more like a croak than a meow, but it was still loud enough to let me know what he wanted, and that he wanted it now.

Zeeba would often sit near me while I worked on a puzzle at the dining room table, or if I was working on something on my iPad, on the couch. Wherever I happened to be is where he was, too, and it was nice to have a kitty companion who was so attuned to what I was up to, or at the very least, interested in being nearby.

He also loved to sleep on the bed with me, which I didn’t learn until the last year or so of his life. This was because I had been sleeping in the room where his kitty sister liked to sleep, so he didn’t come in there often. Once she passed, he would stay with me on the bed all night.

My favorite thing about sleeping with him at night was when I would wake up and roll over, he would meow at me like he was offended, then readjust himself and go right back to sleep. It became something I would look forward to at night, because it was a part of his personality I didn’t get to see for the first few years I visited with him.

Zeeba’s very sudden passing was quite a jarring event, not just for his owners, but for me as well. I don’t think I’ll ever quite get over it, but I know that I was lucky enough to know him for some of the time he was here, and I am sure he had the best possible life because of his owners’ love and care for him.