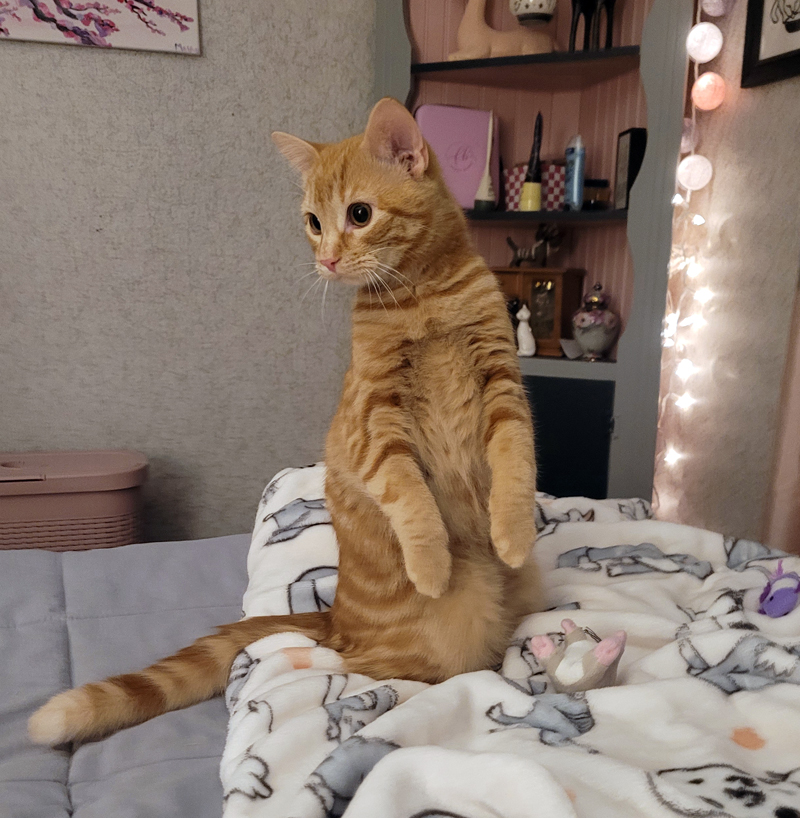 I have a new fella in my life. His name is Waffles, but as with any pet, he has already gained a few nicknames, the most frequently used being “Waffi.”

I adopted him from the Pope Memorial Animal Shelter in Thomaston. He’s 6 months old and he is just the perfect little guy (except when he’s being naughty, but even then, I wouldn’t trade him for the world).

The shelter tells me Waffles had a bumpy start. They told me he was surrendered because he kept getting outside and climbing up trees, to the point where the fire department had to come rescue him.

I wasn’t entirely sure I believed this story, as up until recently he hadn’t even attempted to run out the door or climb any higher than the back of my chair. However, he is starting to do naughty kitten things, and I suspect he is very smart, so he may very well be rascally as he was declared to be!

I admit, I am probably more fascinated with watching him than anyone else would be, but I do get to see some funny things. Despite never having taken a single toy to play with under my bed, I watched him run off with a $20 bill and make a beeline for my bedroom. Sure enough, he had taken the $20 right under the bed with him.

If he’s not causing mischief with money, he’s starting play fights with his feline brother, Jasper. My adorable little guy has jumped from out of nowhere onto the back of his much larger brother and attempted to play. Jasper is still getting used to this “whippersnapper” and doesn’t hold much truck with this type of behavior. Jasper has stopped hissing and swatting at Waffles, which I suppose means he now tolerates his new, boisterous little brother, even though these surprise attacks do result in Waffi get smacked or pinned to the floor.

He’s very good at learning new tricks. I have taught him to sit (yes, really! I’m as surprised as you are), as well as how to stand on two legs, which he now does of his own volition and not just for a tasty treat.  Hopefully, he will be able to learn to stop harassing his big brother, but I’m not convinced that that will happen.

I have (re)learned some things about having a kitten that I had clearly forgotten. Firstly, they don’t know when it’s not playtime. Three in the morning is apparently the time to bring toys onto the bed and throw them around. I also didn’t remember that everything is a toy, including the tissue I may have attempted to throw into the trash, but is instead being carried around like a treasured prize.

Waffi seems to be trying to convince both my mother and me that he has never been fed once in his whole life. My mother will feed him early before I wake up, and as soon as I get up, he’s right there at my feet demanding more food. Sometimes, I actually fall for his plaintive cries if his dish has already been picked up. However, I too, can learn, and I am starting to catch on that this is just a ploy and my little fat-tummied boy is really just seeing how much he can train me to feed him (I am a little bit embarrassed by how well it’s working, though!)

The other thing I didn’t take into consideration is how much I would miss him when I’m out of the house. My last cat, Kismet, while taking up a large portion of my heart, wasn’t the cuddliest cat, and she only seemed excited to see me for about five minutes when I came home from long visits, and barely glanced at me if I’d been gone just for the day. We’d also had about 12 years of every day together, so she may have had enough of me during that period.

Waffles, however, is stuck to me like glue. When I come through the door, whether it’s the end of the day or after being away for a night or more, he runs right up to me like he’s greeting his long-lost friend. I know he is in good hands with my pet sitter (mother), but I still miss him every night I’m not there with him.

He is quite good at keeping himself entertained, and I know he enjoys playing with Jasper, so I don’t think he’s hurting for entertainment. Recently he actually slept all night with him instead of me, so I’m sure he won’t be following me around forever, and it will get easier for me to be away from him (and vice versa).

In the meantime, since I’m home for a quiet winter stretch, I will be taking note of his every move (usually accompanied by photographic evidence) and sharing it with everyone I know. Stay tuned for the exciting adventures of Waffles the Wonder Kitten!