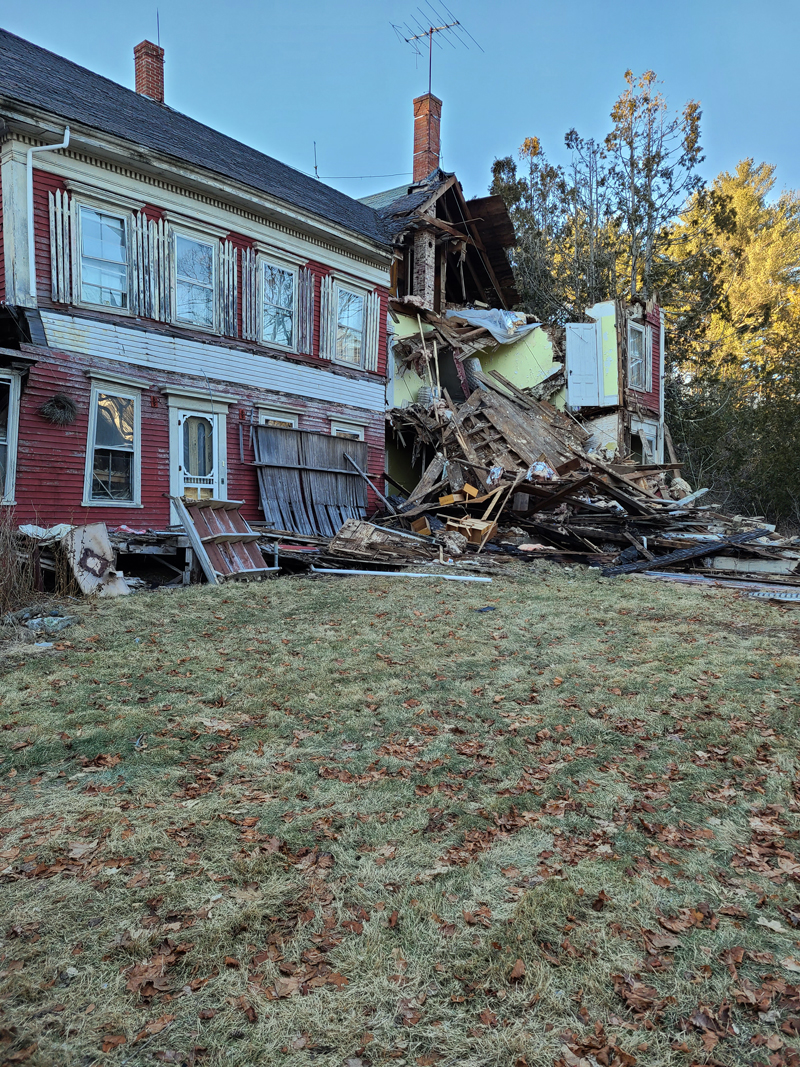 The old Deering and Hazel Genthner house finally gave up the ghost in last week’s rain and windstorm and collapsed in on itself. I don’t imagine that the blizzard last weekend did it any good either. When I was a little kid, it was always the beautiful place at the top of the hill. There will probably be a McMansion built there before we know it.

A good old-fashioned nor’easter blew through, and I mean it when I say blew, leaving us with 15 or so inches in its wake. It was very hard to measure due to the drifting. At least it was light and fluffy, so it was much easier to move and shovel. I was worried that our deck, where we have this winter’s wood, would be piled high and a tough dig out. Very pleased to see that there was absolutely no snow on it, the winds took care of that for me.

As everyone is aware, King Ro was closed from last Tuesday through Sunday. Two of our workers contracted the lovely COVID and then B.J. tested positive shortly after. B.J. was not sick at all so we put the six days to good use, including a deep cleaning at the store. We are up and running again including this week’s Friday night dinner to go. It will be pulled pork with baked beans, coleslaw, and cornbread. The dessert will be key lime pie. Call 529-5380 to reserve. Everyone was looking forward to Maria’s baked stuffed haddock, but she is still out sick so we will have it as soon as possible.

Bethiah Callahan’s grandmother’s daily journal continues to give us an insight into what it was like in the late 1900s in Round Pond (she was born in 1858 and lived until 1965). In 1950 a new chimney at the Brown Church was built by William Little to replace the one from 1853. The total cost was $433. Back in 1853 that would have been highway robbery. The cost, as according to the old journals that we are lucky enough to still have, was a total of $50, including the stove.

As I read these journals they also tell us that the materials were $1,802, blowing the ledge for the vestry and foundation $75, wallpapering the inside $25, eight books of gold leaf $4, all those huge wooden blinds on the inside windows, including painting and labor, $100, and rock work $235. That is a grand total of $2,291. Hard to imagine.

Quote of the week: “If you eat today, thank a farmer. If it’s on your table, thank a trucker. If you eat in peace, thank a veteran.”