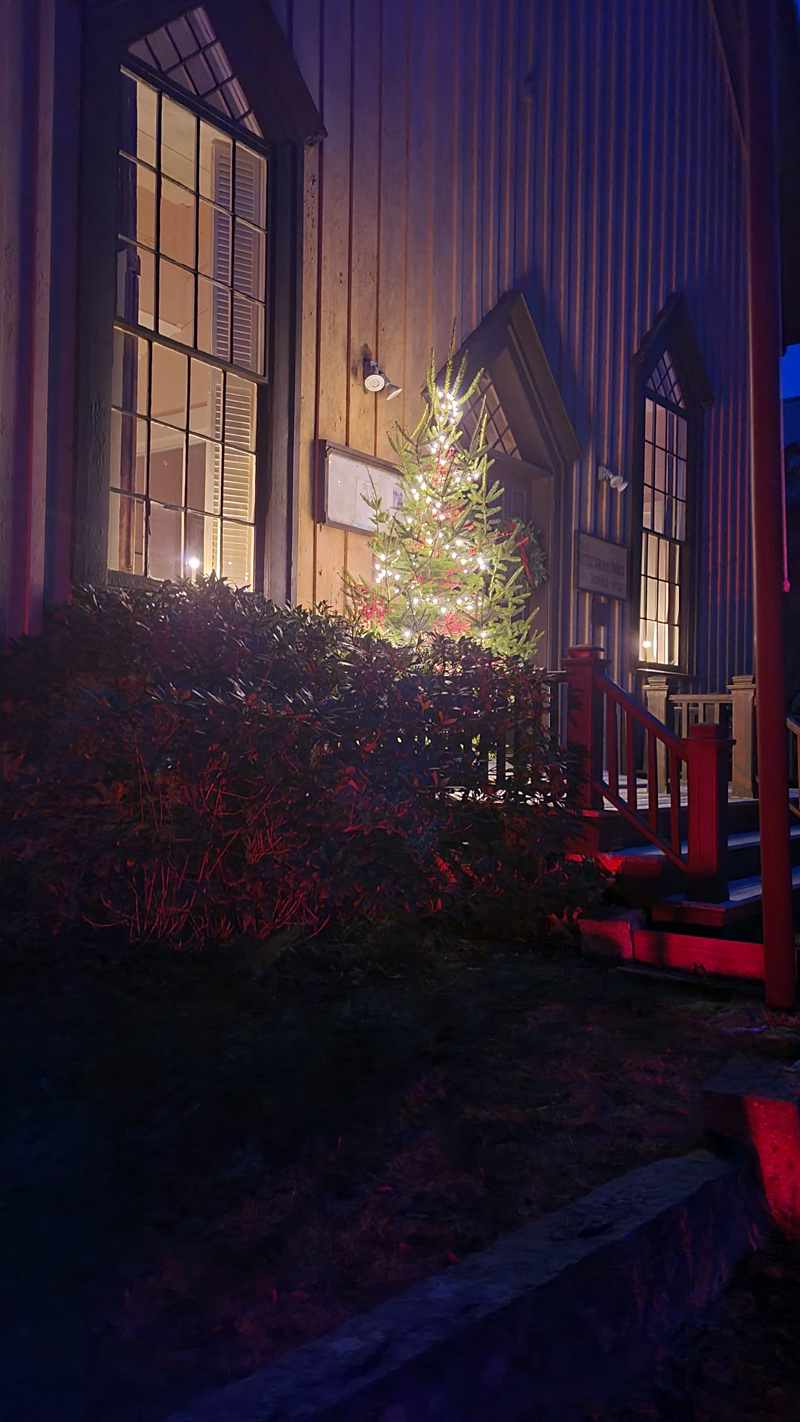 The Little Brown Church decked out for the season. (Photo courtesy Lori Crook)

From the picture above, you can see the Little Brown Church is all dressed up for the season and also for the Sunday, Dec. 4 Christmas service. The service will be held at 7 p.m. with the Reverends Bobby Ives and Jeff Larson officiating.

The night before, Saturday, Dec. 3, at 5 p.m. there will be a lighting of the big tree across from Granite Hall along with caroling. Come one, come all.

The Helping Hands of Round Pond hung beautiful wreaths all around the village this past weekend. They give us even more holiday spirit. Many thanks to them.

King Ro Friday night to go is back in full swing this week with macaroni and cheese (the real deal, old fashioned wheel cheese) Sauteed peppers and onions with kielbasa, oatmeal rolls and chocolate cream parfaits. 529-5380.

I am not sure how there can be so little to write about in our village, but there is not much happening these days. So, as always, I revert to a little bit of local history from the journaling and notes of Bethiah Thompson (1858-1964).

It seemed fitting to relay some of the Brown Church history going back to 1854.

The church was built in 1853 and was supposed to be dedicated on Dec. 29 that year. Due to severe snow storms the dedication was put off until the first week of January 1854. In January, the travelling was very bad, the roads being partially blocked with snow, but at the service there was a “general attendance, every place where a seat could be put was occupied and many were obliged to remain standing.”

Hospitality was extended to the visitors by Mr. and Mrs. Hinds and Mr. and Mrs. Leander Morton. Beds were made up on the floors for the children of the families in order that the guests should have comfortable quarters.

At a meeting of the society in February 1854, officers were chosen and it was voted the society should purchase a bell, cost not to exceed $250. In a subsequent meeting, held in 1855, the members voted to raise funds for expenses by taxing the pew owners amounts ranging from 12 1/2 cents and up per year. In 1857 bills amounting to $5.77 were presented and ordered paid.

At a later meeting it was found that Samuel Hinds, who had been moderator and treasurer and very active in the work of building the church, had spent out more money than had been taken in since the pew owners were not meeting their obligations. In 1858 the committee voted to charge the school district $10 for the past year and in that proportion so long as they use the vestry for a primary school. In 1859, the society met and all bills were paid.

As we sit in those very same pews this coming Sunday, you can only imagine which families sat in which numbered pews and how much they were taxed per year to do so. Also, as that very same bell rings out, we know it did not cost more than $250.

Quote of the week: When the power of love is greater than the love of power, the world will know peace.