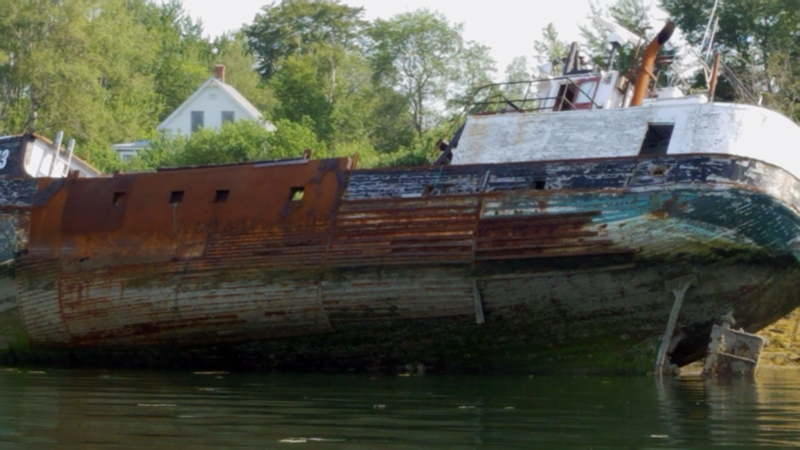 A few years ago, the Columbia broke loose from its mooring and went aground off of the back side of Louds Island and there it still sits. While my grandson thinks that it is the coolest thing that he has ever seen (he is convinced that there are dead bodies aboard), I am sure that the land owners on the island are not thrilled about the whole situation. No one seems to quite know what to do about it and there is concern about fuel in the tanks (or dead bodies aboard).

For now, it has become a little bit of a tourist attraction and no one seems to be following up on my idea of a floating restaurant like Dimillo’s.

Sally Pedrick, of The Library Art Studio at Munro Brook, has her display of oils and woodcuts open to the public through Aug. 31. For more information, Sally can be reached at 529-2345.

On Wednesday, Aug. 14, at the Brown Church summer concert series, the Boardman Trio will be performing their acoustic folk and rock. Concerts begin at 7:30 p.m.

Also at the Brown Church next Sunday, Aug. 11, the Rev. Anne Roundy will be the guest minister. Vespers begin at 7 p.m. Hard to believe that there are only three more services remaining for the season after this week.

The Washington Schoolhouse will be hosting its last beano night this Thursday, Aug. 8, from 7-8:30 p.m., with George Sawyer calling.

Liz Martone will be starting her second session of art camp at the schoolhouse Aug. 11-18. Liz can be reached at 529-2067 for availability of spots open and for more details.

Quote of the week: “Sometimes intelligence gets confused with education. You can have a degree and still be an idiot.”