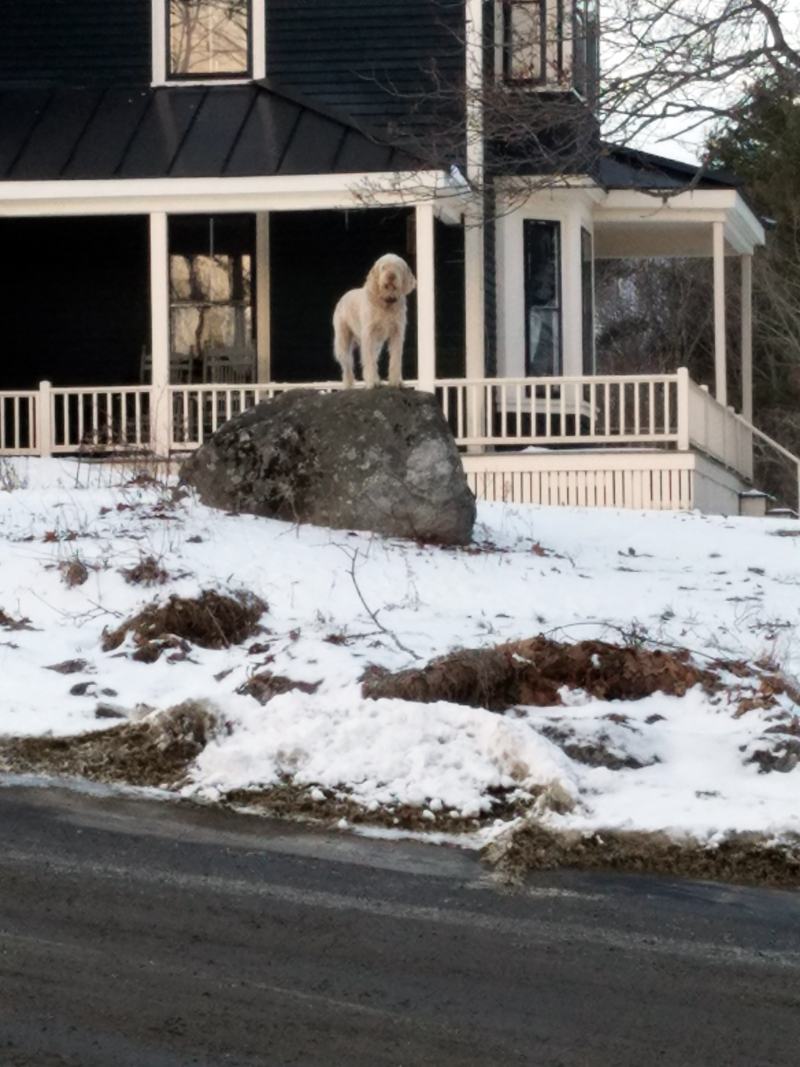 Pippo guards the road into Round Pond village.

For two to three years, I have tried to get a picture of Pippo, Kathy and Russ Mack’s dog, as he guards Round Pond from his lofty perch on their front yard. Finally, while walking by a couple of weeks ago, I was able to snatch a quick picture before he hopped down. I do believe that Pippo determines who is allowed into the village and who is not.

I did have my foot surgery a couple of weeks ago, but my sentence of how long I have to go without putting weight on it was lengthened to four weeks and then an additional four to five weeks before it will be healed. I am not supposed to go up any stairs and my office is above the garage. I couldn’t stand it anymore, so I very carefully made it up this morning to do my article. I hope my surgeon doesn’t read the “Round Pond” column!

This Friday at King Ro, B.J. and Steph will be serving up Maria’s wonderful lasagna and Steph’s white bean chicken chili. These will be accompanied by garlic bread, salad, chocolate mousse, and berry crisp. I am hearing that B.J. is doing a good job waitressing for me!

My local historian, Bethiah Callahan, brought me up a notebook full of letters to her from Adelaide Butman, who lived here in Round Pond many years ago. Adelaide wrote a 16-page letter about her memories of growing up here in the village. I would like to share a couple of her thoughts:

Henry Chamberlain was the village Squire here in Round Pond. He knew everything about everybody from their cradle to their grave. Henry was also a surveyor and settled all the line fence disputes here in Bristol. He married the daughter of a Coast Guard Captain Wright and had one idolized son, named Eric. Sadly, Eric died and Mrs. Chamberlain also died in my youth and I remember Henry and his mother in law, Mrs. Wright, living in the homestead.

Captain Gideon Yates must have been twice married, for Katie and Gussie were half-sisters. Katie was the life of all the parties, which were the Methodist Church sociables. Gussie was more sedate. The wonder of the village was that Katie was in love with Allie Morrison. Gussie married Will McCray, who was a very nice young man. But Katie did not marry her first love. From far away over the seas, Captain Yates brought home to visit a young Russian named Captain Franck. Captain Franck had an iron ship, and in those days that was really something. One Round Pond girl had already married a Russian and gone away to live on the Pribilef Islands to catch seals. Vivacious Katie couldn’t make up her mind to marry Captain Franck. He left, telling her that when she made up her mind to marry him, she could join him anywhere in the world. I do not remember the meeting place but they were married, at last. They had three children: Lena, Jimmie, and Mollie. One was buried at sea. Jimmie was born in Calcutta. Mollie was a darling child. Captain Franck died in Round Pond, in Uncle Will Burman’s house.

Evidently in the last few weeks there has been a party going on at the town landing here in Round Pond. Beer bottles and trash in general are being left everywhere to blow around the parking lot and into the water. Please have a little bit more respect for such a beautiful spot. If anyone has seen anything pertaining to this issue, please get in touch with either B.J. or me.

Quote of the week: “Build a life that you don’t need a vacation from.”