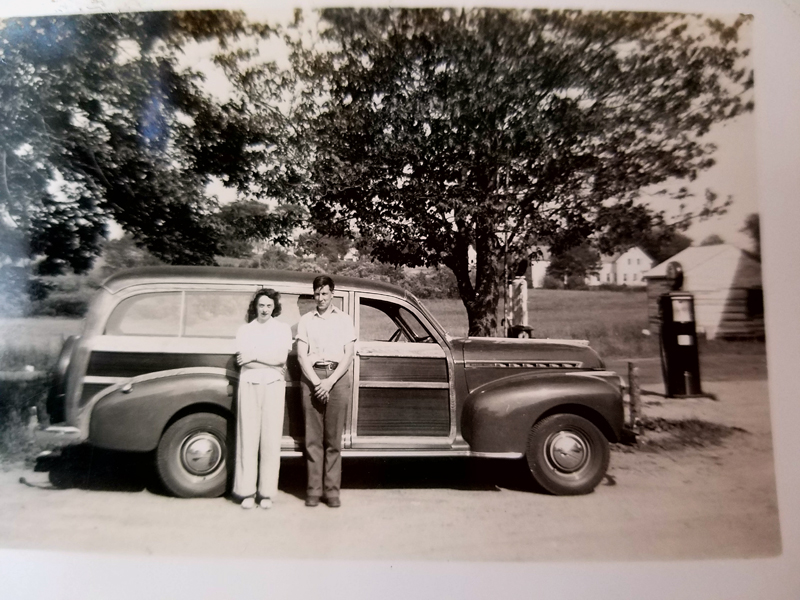 The accompanying photograph is of Mertland Steer and Jane Foster. Mertland was Bert Steer’s son and Bethiah’s brother. Jane was Lelia Atkinson’s stepdaughter.

For approximately two years, from 1940-1941, Mertland’s station wagon was the school bus here in Round Pond for the Washington School. The children that lived a mile or more away from the school were allowed to ride the “bus.”

When Mertland went into the service after Pearl Harbor, he made sure that his beloved car was up on blocks and safe and sound for when he returned. Mertland moved to Portland after the war and worked at a wholesale grocery store on Commercial Street, and in later years moved with his family to Connecticut until his death in 1995.

After Mertland’s stint at driving the students to school, a few others took over during the war, Mabel Poland and Therese Richards being two of them. I couldn’t help but feel sorry for the kids that lived just under a mile from school!

As of Monday, Feb. 25, we have gained 2 hours and 4 minutes of daylight. Hallelujah! It seems so nice to have daylight when the alarm goes off in the mornings, and daylight past 5:30 p.m.

Very high winds are predicted for the first few days of this week, with gusts of up to 65 mph. Power outages are predicted, so it could be an interesting work week.

I was walking the other day, and when I came to the bridge on Back Shore Road, I noticed a lot of activity in some sort of an old, scrubby crabapple tree over the side of the cement barrier. On further notice, I realized that there was a huge flock of robins, at least 30, but they were hard to count. They were feasting on the little red fruit and sometimes fighting over them.

Robins don’t leave the area as much as they used to in the winter, but these were the first ones I have seen this season. A sure sign of spring being just around the corner.

Quote of the week: “Sometimes not saying anything is the best answer. Silence can never be misquoted.”