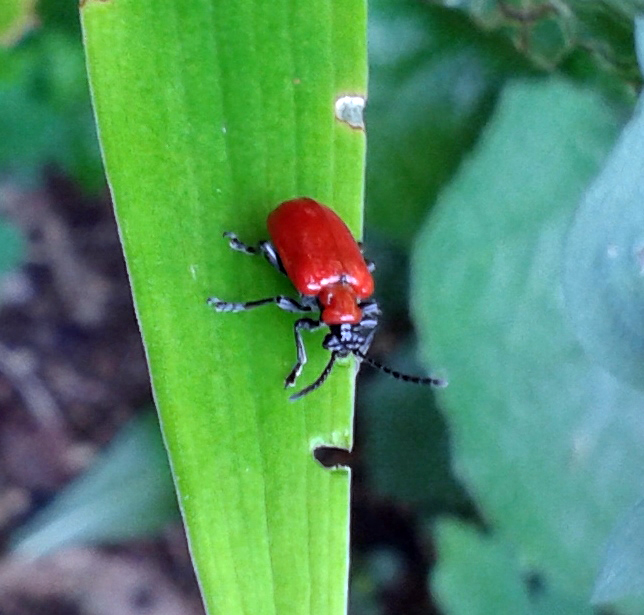 Begin inspecting your lilies when the plants emerge in the spring. Adult beetles (pictured here), larvae, and the orange eggs may be removed by hand. An effective control is to use a jug with a few inches of water mixed with a squirt of dish soap and position it beneath the beetle. Use a small stick or fingertip to prod the beetle, which will then drop into the soapy water.

The adults drop when disturbed, landing on their backs on the soil. This makes them difficult to see once they hit the ground, as their undersides are black. Placing the jug beneath the beetle ensures that they land in the soapy water and not on the ground, where they are difficult to find.

The larvae and egg cases can be removed by hand, but as the larvae cover themselves in their own excrement, it is recommended that rubber gloves be worn during removal.

Coffee grounds placed on the soil around the lilies are said to be helpful in beetle control. The smell of the coffee is supposed to confuse the beetle and make it difficult for them to locate the lily.

On a local note, the Somerville Comprehensive Plan Committee recently voted 5-2 to forward the comprehensive plan to the selectmen. Willard Pierpont and Mary Throckmorton voted no. A few minor changes have been made to the initial draft; some wording was revised and hyperlinks to Maine statutes were inserted into the online document. Residents can view the document at somervillemaine.org or visit the town office.

A date for voting on the plan will be set by the selectmen.