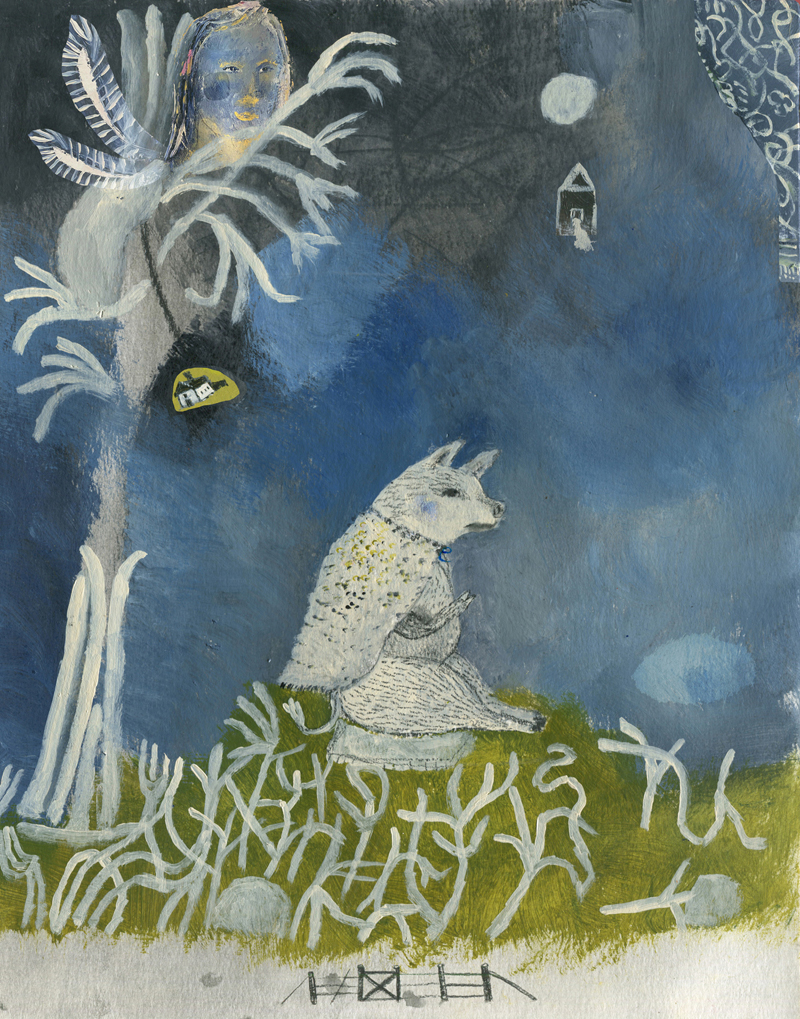 Earnest the pig sits with the motherly spirit.

The note slipped under the front door that morning was written in dirt on an old page from a feed catalog.

I recognized the writing. It was Earnest the pig’s.

“Meet me at the Small Rodent and Bird Cemetery at dusk…alone,” it said.

Now even though Halloween has passed, the barnyard is super charged all year for energetic encounters. Our 1760 house, one of the first houses in Bremen (then Bristol), is brimming with history. From the minute we entered this house, the energy was warm and welcoming. With the exception of the northwest section of The Wood, our land feels free of demons. It can be spooky on any night here, with the breeze from the cove blowing through The Wood, for the night life there is its own entity.

The cemetery I was to meet him at is near the front barn. Dusk turned to darkness.

“Hello,” I heard Earnest’s voice say. There he was, appearing at my feet seemingly from out of nowhere. “I’ve drawn a picture for you.”

As I looked at the image, squinting in the dark, I could see my mother’s face. My mother died out west at age 87 in 2013.

Earnest and I began walking back to his hut, which sits next to the outer equine barn, where the natives were restless for hay. I asked him how he was able to draw my mother’s likeness so well without a picture.

My little hairs wiggled on my neck as a wind blew in just then from The Wood behind Earnest’s hut.

“No, she smiles though,” the pig said. “She also sits above your bedroom window sometimes, and tends to the hydrangea, dead heading the old flowers.”

I thought for a moment and realized sometimes while I lie in bed I’d hear rustling in that old tree. It is as tall as our two-story house and well over 100 years old, they say.

Earnest went into his hut and started bedding down in his straw. The night was crisp and breezy and the deep Maine sky was glittering with stars, one of the many gifts of life on midcoast. I sat with Earnest for a spell, as I listened, watching for my mother.

Earnest looked up at me. “She usually doesn’t come on weekends.”

So I did my barn feedings and started back for the house.

She comes and visits my pig and not me, I pondered.

I stopped to look up at the old hydrangea by my bedroom window. Turning back for the house, a gust blew, and I could hear the dried, dead hydrangea flowers rattle. Several blew off, landing at my feet.

I picked them up, and placed them in a bowl as I entered the house.

The next morning at feedings, Pickles came to me.

“Mrs. Dunn, do you know that woman who sits up in the hydrangea tree?”

(Katherine Dunn, of Apifera Farm in Bremen, is an artist and a writer. Apifera is a nonprofit that takes in elderly and special-needs animals and shares them with elder people. Visit katherinedunn.us to learn more.)