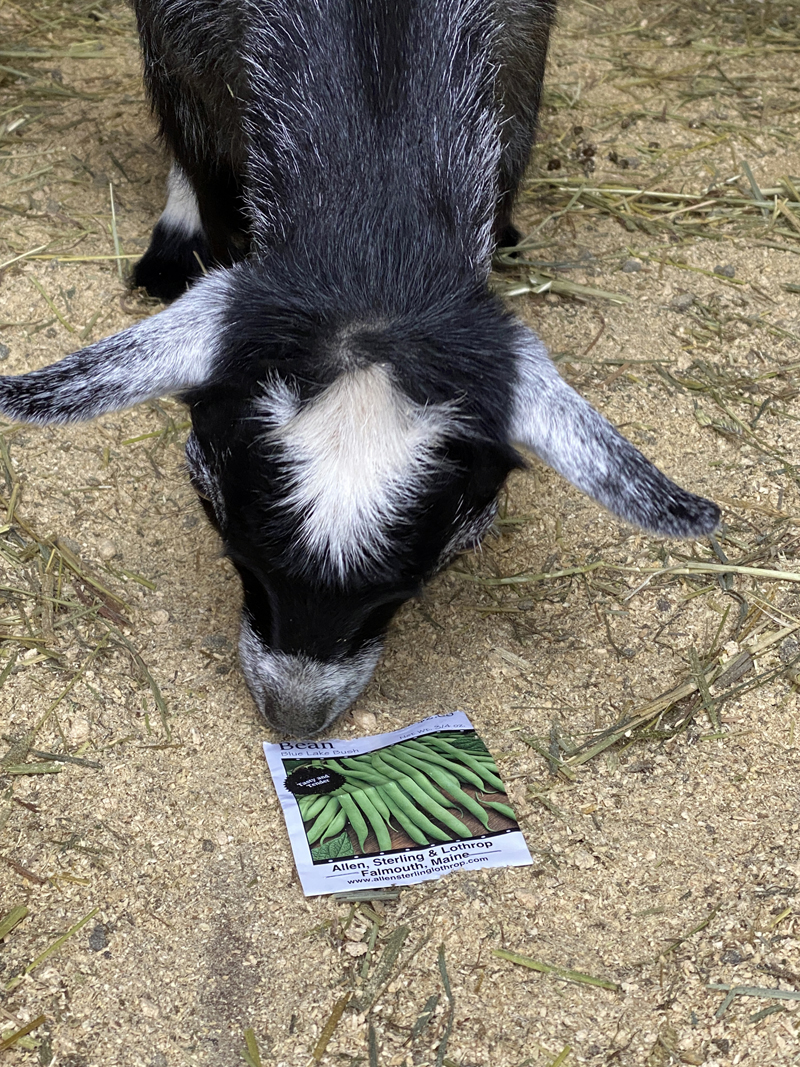 As I ventured into the barnyard, I noticed all the goats and Earnest the pig standing out in a freshly tilled area of the yard. Earnest had dirt encrusted on his snout, so it appears he had been the lead tiller, which he is very good at.

“Pickles, you have the string all knotted up in your feet, and it needs to be straight so our rows will be tidy!” said Poetry, one of the old goats.

As Pickles did her best to make a straight string line, little Hannah followed behind her, plopping in seeds in the dirt, tasting one every so often.

“You can’t taste them yet, they haven’t grown up yet!” said Poetry, clearly trying to be in charge.

“But they are especially delicious,” said Hannah.

“What’s going on here?” I asked. “I thought we agreed you would only be growing pumpkins and sunflowers with my supervision this year?”

“Mrs. Dunn, it’s my fault. I love green beans. I found your seed packets in the feed room and … I took them,” he said.

“How did you get in the secured feed room?” I asked.

“And how did Pickles get in the secured feed room?” I asked.

“She stood on me!” said Ollie the tallest goat. “Then she banged her head on the door over and over.”

My mind raced, remembering all the times I was sure I had put something in the feed room and couldn’t find it.

“OK, look, what you did was wrong. But since you are planting the seeds for the good of everyone here, I will forgive you. But I’m not going to tend the bean garden, you will all have to do that on your own,” I said as I walked away.

“It’s just a bunch of beans,” said Pickles. “They have so much food in the house and Mrs. Dunn says her pants don’t fit so good anymore so I don’t know why she needs beans.”

“I heard that Pickles!” I said as I closed the door.

A few hours later I returned to the barnyard to do night time chores. It was eerily calm. Earnest the pig appeared at the barn door.

“Mrs. Dunn, we decided not to plant your seeds. I’m sorry we took them. I just love green beans, almost as much as grilled cheese sandwiches,” the pig said.

“It’s okay Earnest. I shouldn’t deny you something you love so much. Life is short, we should relish the bounties of earth, including beans,” I said. “Why don’t you and I go get the beans and plant them together?’

“I like that idea,” he said. He led me to his special corner where he often hid special possessions.

“Me either!” said Puddles.

Just then little Hannah wandered in. “Are there any more of those beans? They are especially delicious!”

(Katherine Dunn, of Apifera Farm in Bremen, is an artist and writer. Apifera, a nonprofit, takes in elderly and special-needs animals and shares them with elder people. Learn more at katherinedunn.us.)