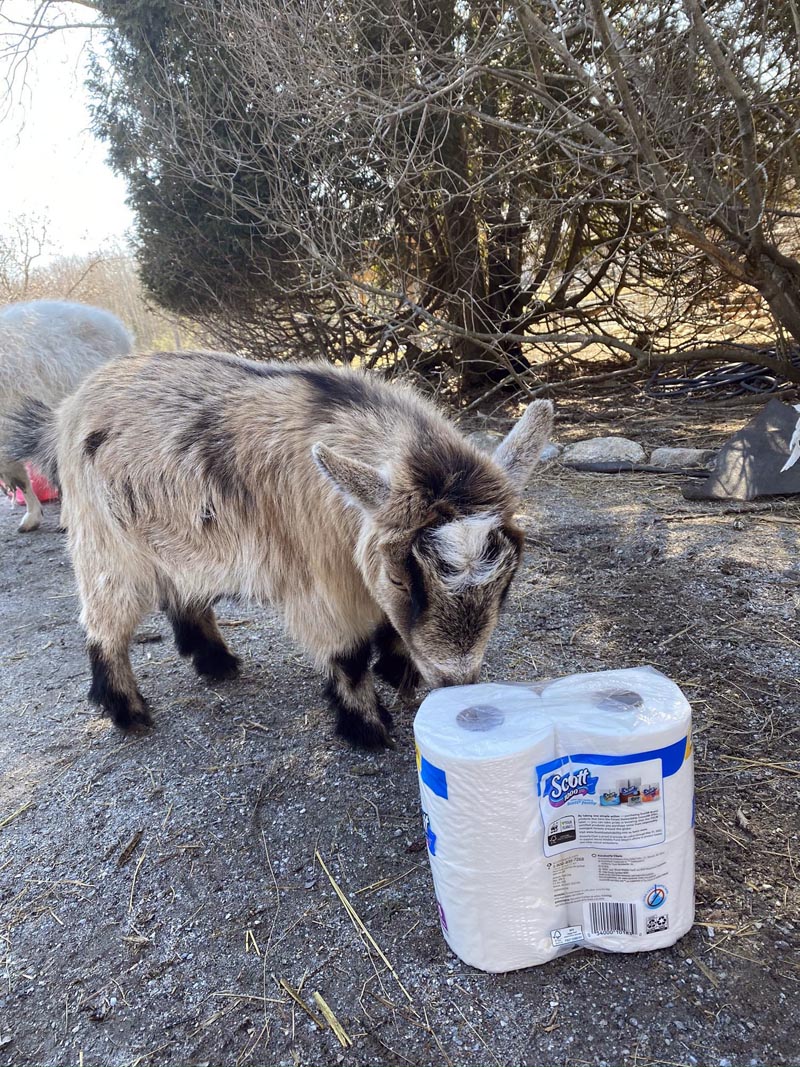 “How many rolls did you get?” Ollie asked Opie as I entered the barn.

Earnest the pig wandered by.

“There is no reason for you to be hoarding toilet paper. You do not require supplemental supplies to poop or piddle, toilet paper is for humans because they are bathroom challenged,” said Earnest.

At this point, I had to step into the conversation.

“Where are you getting this toilet paper?” I asked. “I can’t even find a roll at the store this week.”

“We made a deal with the dog down the street, he brings it to us from the house and we give him a bucket of chicken scratch per roll,” said Ollie.

“But you don’t need toilet paper,” I said.

“I know,” said Ollie, “I can poop and walk and talk all at the same time without it.”

“Ollie heard on the news that if you don’t have at least one roll of toilet paper per day the virus finds out and kills you,” said Henneth the blind chicken.

“Where did you hear the news?” I asked.

“The llama gets WiFi off his ears,” said Earnest.

“You are the victims of misinformation. The virus is not prone to detecting who has or doesn’t have toilet paper. Secondly, you do not need toilet paper. Thirdly, the virus infects humans not little goats or llamas or…” I continued…

“…or bees? Do the bees get the virus?” asked Opie, very concerned.

“I do not believe so,” I assured him.

“March right back to that dog and give the toilet paper back,” I said.

“We did not steal, it was a gift of the dog!” said Ollie, quite upset.

Just then, one of the Secret Sisters, the hens of the farm, came rushing out, breathless from excitement.

“I would like a roll of toilet paper! My undergarments often get white cling-ons; it is a real problem and so unsightly!”

“OK, I’ll allow one roll of toilet paper to be left in the barn. But it has to last a long time,” I said.

How many rolls have you taken from that dog?” I asked.

Opie was named after the little boy in Andy Griffith. As I began to speak, I channeled Andy, “Now, Opie, you need to do the right thing. People need that toilet paper,” and I walked back to the house.

The next morning, I heard a ruckus in the front yard by the road – usually off limits to the animals. A line of cars had pulled in and Opie and Ollie were tossing rolls of toilet paper into their cars.

Soon after, I heard the familiar little hoof steps at the door, and then a knock. There before me was Opie and he handed me a bucket of money.

I’ll have to talk to him about price gouging.

(Katherine Dunn, of Apifera Farm in Bremen, is an artist and a writer. Apifera is a nonprofit that takes in elderly and special-needs animals and shares them with elder people. Visit katherinedunn.us to learn more.)