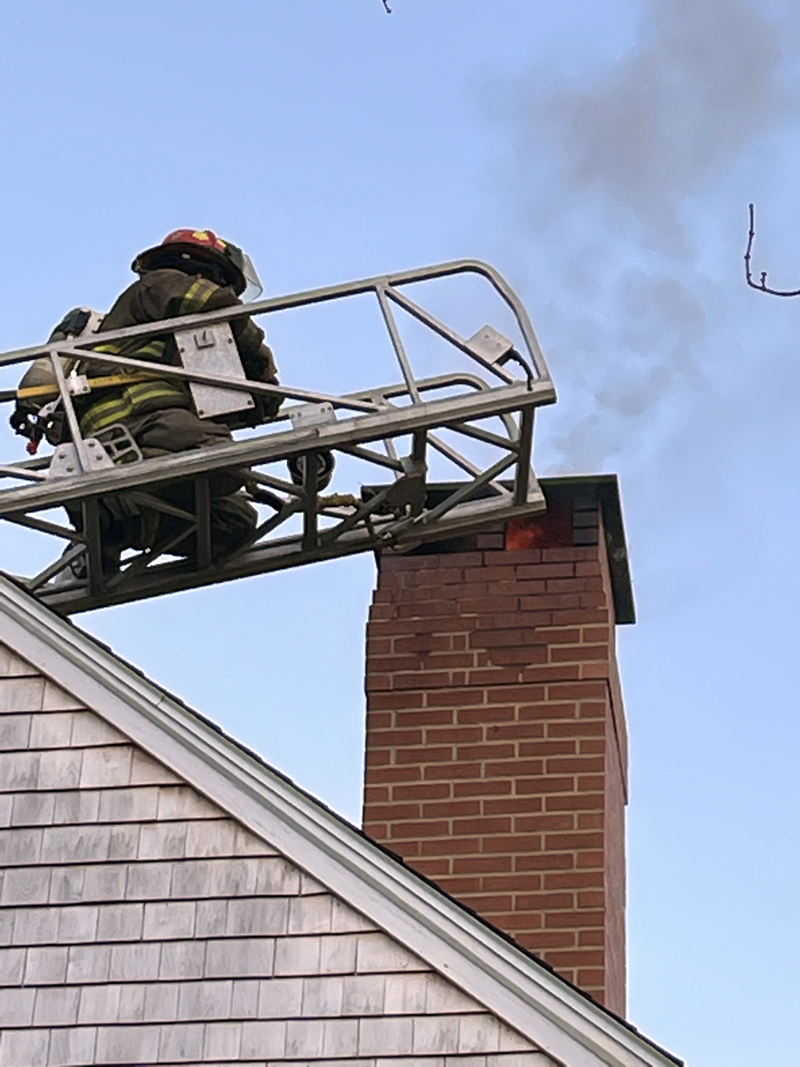 Flames emerge from the top of a chimney during a fire in Damariscotta. (Photo courtesy of Sgt. Erick Halpin, Damariscotta Police Dept.)

Cold, autumn air and the start of winter bring unique challenges to firefighting. In particular, it is often the start of chimney fire season. A chimney fire is a fire that occurs in the chimney, or vent, of a heating appliance. Frequently, it is caused when creosote ignites. Creosote is a highly combustible by-product of wood fires, which is deposited on the lining of chimney walls.

Chimney fires can be very scary and dangerous. Sometimes, chimney fires can sound like a runaway train and make lots of noise, or may produce a crackling sound in the chimney.

To help slow down the fire, you can close doors, vents and air inlets while exiting the building with your entire family. Many chimney fires are extinguished without any additional damage to the building. However, the fire can spread beyond the chimney, so you should take the appropriate steps to evacuate while it is safe to do so.

It is not uncommon for some smoke to come inside the structure. Creosote can expand and fall down the chimney while it is burning. This can cause a partial or full blockage in the chimney, which forces the exhaust gases to seek other means of escape.

Creosote buildup happens in all wood-burning appliances, but can become much worse when certain conditions occur. Burning green, unseasoned wood can contribute to rapid creosote buildup. Operating a wood burning appliance without adequate combustion air, or keeping the fire in a smoldering state can also contribute to rapid buildup of creosote. Creosote will collect in cool flues more quickly than those that are used with more frequency.

As some level of creosote buildup is inevitable, even under the best conditions, it is important to inspect and clean your chimney yearly. Some indications of buildup include poor draft on the chimney or excessive material in the clean-out. Do not wait until a chimney fire has started; cleaning is an important step to take for prevention.

When the fire department responds, there are a number of steps that they may take. A dry chemical extinguishing agent may be used, a chimney flare, and possibly running a chain with a heavy weight on the end down the flue. 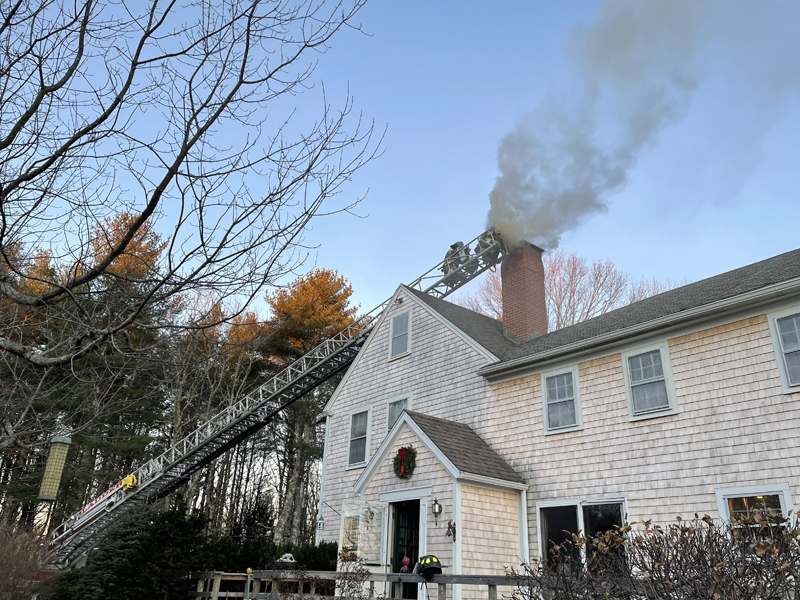 Firefighters work off Damariscotta Ladder 4 to extinguish a chimney fire. The fire was contained to the chimney. (Photo courtesy of Sgt. Erick Halpin, Damariscotta Police Dept.)

Don’t be surprised if roof-top access is needed to extinguish the fire, or if there is some chemical dust clean-up that is necessary after the fire is out. Chimney tops or screens may need to be removed as well, which may require replacement afterwards.

Firefighters may need access to all levels of your house, including the basement, attic or other areas where the chimney is located within the wall. A thermal imaging camera is another tool that will help ensure the fire was contained within the chimney, and gas meters can be used to make sure dangerous gases did not enter the structure. Firefighters will likely extinguish and remove coals and partially burnt materials from your fireplace or stove.

While you may expect the fire department to use water, this is rarely done with fires contained to a chimney. The use of any significant amount of water can rapidly cool liners and masonry, causing immediate and permanent damage to the chimney. You can expect that firefighters will tell you not to use the chimney again until it is inspected.

Having the chimney inspected by a professional after a fire is very important. The high temperatures can cause damage that is not obvious from the exterior, but can affect the chimney’s structure, flue, liner, cap, or other components.

It is also critical to have working carbon monoxide detectors as well as smoke detectors in any building that has a fire-generated heat source. Please follow NFPA guidance for detector placement, which includes inside each bedroom, outside each sleeping area and on every level of the home including the basement.

Be safe out there.