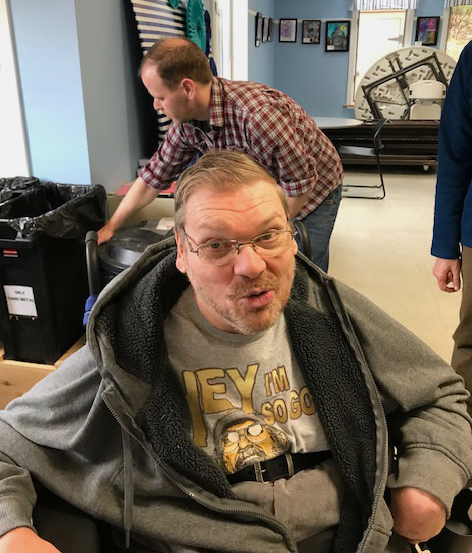 A lot goes into recycling. There is sorting, packing, and placing the items into a vehicle and taking them to the transfer station — easy enough.

For the Mobius Green Team, this is a process made a little bit more difficult due to some physical limitations; a couple of the folks rely on wheelchairs to get around. Does this slow them down? Absolutely not!

With persistence, teamwork, and lots of laughs, Thursday mornings at the Mobius center become a bustle of recycling activity.

After sorting through the bins and placing the items to be recycled into separate bags, the van is then loaded up. Next stop: over to one of the agency’s group homes to collect more.

Riding with this crew is an enjoyable experience, as they talk about the way recycling makes for a better world, lamenting on the trash they see along the road. “It’s sad,” says Nate Allen.

Glenn James chimes in that he wishes people would stop throwing their trash out of their windows. “I wish we could stop and pick it up,” he says.

The Mobius Green Team has only about 2 to 2½ hours to complete their rounds — lots of big ideas and not much time. However, the team is expanding within the community and is excited to announce they are picking up Coastal Kids Preschool in Damariscotta as a partner.

There has been some discussion about the desire to start a compost center at Mobius. Nate, Glenn, and Andy Richards have spent considerable time at the Coastal Maine Botanical Gardens in Boothbay learning a lot about composting. “It’s not going to be easy,” laughed Glenn, “but it will be a good thing to do.”

The Mobius Green Team idea was developed in April 2018, when then-Mobius Quality Assurance Director Diane Eder noted that the trash bins were also being used for items that were recyclable. The team consists of Glenn James, Nate Allen, and Andy Richards. Jesse Means, who has been a direct support professional with Mobius for close to 7 years, facilitates the team.

Jesse leaned a lot about recycling from his father, who was an environmentalist, so this is a real passion for him; passing it on to the clients and staff at Mobius has been “awesome,” he says.

They had watched various videos on the process of recycling and some fun facts, such as learning how to create art from some of the recycled items. This gave them a better understanding of the whole recycling model. The group soon realized that this was not just about tossing recyclables into bins, but that there is a whole other world after that. The items go through a pretty intense process that includes proper numbers, sorting, and cleaning.

After picking up a load of recyclables at one of the group homes, Jesse helps everyone get back in the van. The Mobius Green Team heads to a couple more homes for more, and then, off to the transfer station in Nobleboro, where the van is unloaded. Everyone has a job to do. The team is happily greeted by the attendant as well as fellow recyclers.

Glenn, Andy, and Nate each have an important role that includes flattening the cardboard boxes and sorting through the various cans and plastic containers, knowing just where everything goes.

A good aim is very important when they toss the recyclables in. Glenn, who is in charge of boxes and cardboard, has a pretty good aim, considering his electric wheelchair is just a tad below reach. With a great big laugh and an arm ready to chuck, he backs up, turns his motorized wheelchair just so, aims, and shoots the flattened boxes and cardboard right in. “I haven’t missed one yet,” he says with a big smile.

Andy really likes organizing the scrap metal pieces from the van and tossing them into the bin. Nate focuses on the extra-large pieces of cardboard and bags full of plastic containers and cans. On this particular day, there is a lot of cardboard; some of the boxes that were flattened out were taller than him. “Look at this!” Nate says with a laugh. “This is huge!”

The last stop is the redemption center, where the guys turn in cans and bottles. With some of the money, they buy a soda or coffee, but mostly use the money for recycling projects.

We spent a lot of time talking about the benefits of recycling and the pride they take in helping out in the community. Last summer, they made hats and T-shirts with their Mobius Green Team logo.

Last Christmas, the team made ornaments out of some of the recycled material. They used some of the money earned from recycling soda cans and bottles for much-needed items to put just the right flair on a decoration.

(“The Mobius Strip” represents our inner gifts and our outer selves working seamlessly together, creating a whole being. Mobius Inc. is located at 319 Main St., Damariscotta and online at mobiusinc.org.)