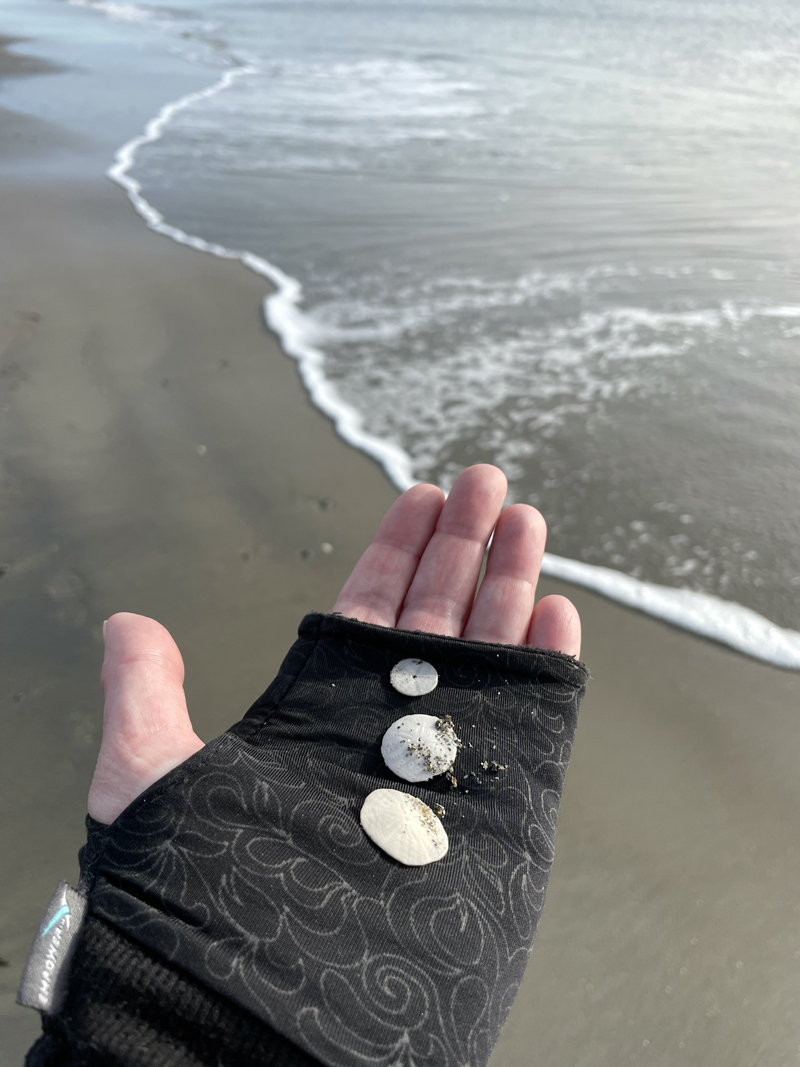 I was on vacation between Christmas and the new year, and made time for a beach walk, one of my favorite winter things to do. I feel a bit traitorous writing about Popham in my Lincoln County News monthly column, but keep in mind, it was all Lincoln County once, and for a very long time, too.

You have to go way back before the major Midcoast artery of Route 1 and all its backroad veins to remember that once it was the peninsulas of Bristol, Boothbay, Georgetown, and Phippsburg that formed the hub of commerce, homesteading, and trade in our region.

Way, way back they were all part of York County, but the Midcoast quickly distinguished itself as an epicenter of colonial development, and in the early 1760s the province of Massachusetts Bay allowed Lincoln County to incorporate “all lands east of the New Meadows River, Merrymeeting Bay, the Androscoggin River, and extending north and east all the way to Canada,” according the Lincoln County Historical Society website.

That’s easily most of Maine, except for the bottom-most tip which even now many regard as not really Maine. It never shook its Massachusetts-ness.

Back when we were all Lincoln County, major transportation was done by boat. Those fingers of land that in a 21st-century January seem like such a long stretch from the convenient upriver hubs of Damariscotta and Bath, were just a “hop, skip, and a jump,” from each other. Or should that be a “hitch, sail, and jibe”?

The truth is they still are. It just seems to take a long time to get there in winter, by road.

I like the beach to myself, thank you very much. I prefer Popham, especially the fort-end, but Reid State Park on the Todd’s Point side will also do in a pinch. I’ll take Pemaquid Point Lighthouse, too. And any empty harbor save for the working boats that remain.

A drive down Route 32 in Bremen, Route 130 in Bristol, Route 127 in Georgetown, or Route 209 in Phippsburg in winter promises places without all the people that flock to these peninsular destinations in summer.

You want to know Midcoast Maine in your bones? Bundle up. Pull your Boggs over thick socks. And drive alone. Walk alone. In winter.

Let the silence of the season settle over you like the sheen of fine ice. In that brittle state is what I believe to be true: This is a crisp and beautiful place to call home, but in the crystalline face of winter, it’s also a bit inhospitable, inconvenient, and empty.

I walk at Popham in the bleakest of months at low tide because that’s when I find the most sand dollars. It’s good to have goals.

I walk at Popham year-round because it’s new to me. Believe it or not, we never went there when I was growing up. It was any old stretch of shore I noticed looking back as we rounded Seguin Island on my grandfather’s boat headed to Boothbay Harbor for the day. It was a road sign pointing to a turn we never took.

How could I live in a place for almost 50 years as if a major state park didn’t exist in my backyard? A place so big and vital people carry it in their hearts all over the world, and return to it as often as they can, led by memories and imagination.

I am told a story about how when I was around two, I almost drowned at Popham. My aunt saved me. My mother didn’t swim, so I don’t know how “almost drowned” I actually was. Maybe I just went under and stayed there too long. I was – and still am – confident in any body of water. And, to be completely honest, I played that trick on my mother many times growing up. It’s easy to imagine I started as a toddler.

I always did things that made my mother nervous. It got her attention like nothing else. 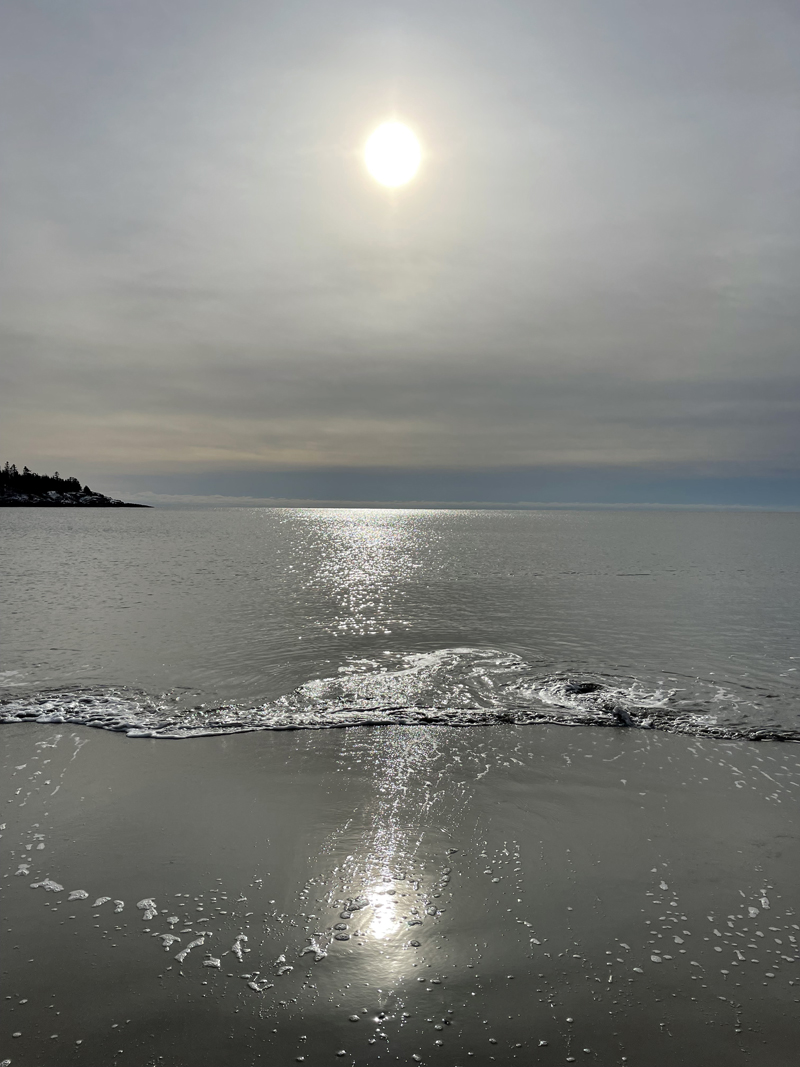 But what matters here is we never went back to Popham. Plenty of beaches in the Midcoast, and the beach was the center of our summer recreation. The trunk was packed in June with everything but lunch. The beach was Small Point, at the very end of the Phippsburg peninsula, where at Head Beach there was no “undertow,” which, my mother said, is what almost took me.

Once in a while, we went to Reid State Park in Georgetown, but only to the lagoon, because there was “undertow” on the other side.

Every summer we made an awkward pilgrimage to Pemaquid Beach with Nanny and Papa in their Buick, sliding back and forth on the bench seat in the back on our towels. I have this vague memory that my grandfather proposed to my grandmother, a “Boothbay girl,” at the lighthouse, or something. They were married in Newcastle in September 1949. But I have no way to verify that now.

My grandparents were not beach people, and brought with them high-backed folding captain’s chairs where they sat in their laced-up shoes and long pants watching my brother and me get “soaking, wringing wet” before we breaded ourselves in sand.

My mother ignored all of us, lost in a paperback with giant sunglasses on top of her prescription specs, smooth and tanned in her one-piece suit, as much a part of the landscape of the beach for my brother and me as seaweed and shells.

I see her there still.

I don’t know where other souls go when they leave their earthly bodies, but my mother’s went to the beach. I always find her there.

She’s in every sand dollar. And every sand dollar says I love you in ways she never could. I only find them at Popham, that place where she almost lost me, in her heart and mind anyway, and in the story handed to me, that beach she never risked going to again, and that never existed to me in any real way until I found it at age 48.

I had a walk on Coronado Beach in San Diego in November 2019 with one of my best childhood friends. I was attending an adult ed conference, and she drove down from Santa Barbara to meet me. We hadn’t seen each other since our high school graduation 30 years before.

When I got back to Maine, I said to my husband, “It would be so cool if there was a beach like that here, where I could just go and walk, that stretches on forever.”

He just stared at me.

I was in graduate school the Christmas my mother died. Her funeral was on my 35th birthday. A couple days later I checked into my residency at the Stone House at Wolfe’s Neck in Freeport. I have only one memory of that week of workshops and readings. I sat on an all-season Adirondack chair in the snow and looked east across Casco Bay.

Sometimes there is no way back.

(“The Way Back” is a monthly column of reflections and revelations as editor Raye S. Leonard crisscrosses back roads and byways. Email her at rleonard@lcnme.com.)