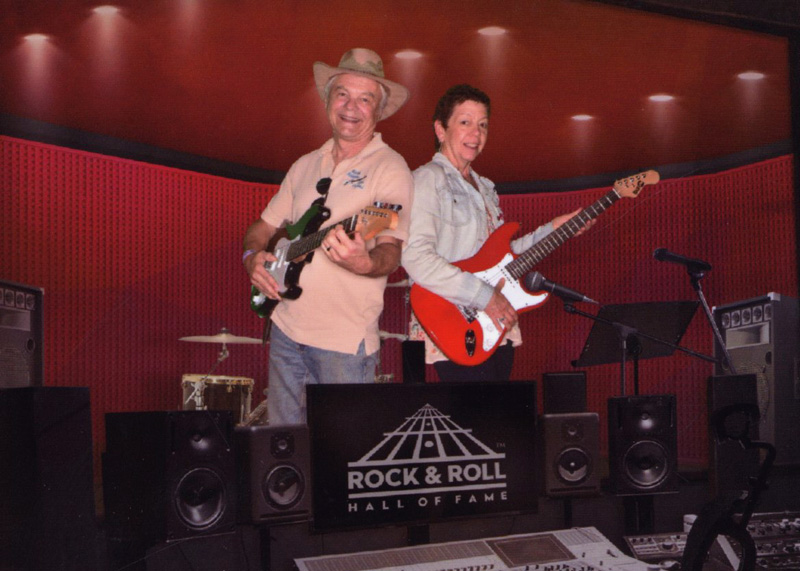 Larry and Ms. Sue take the stage at the Rock & Roll Hall of Fame.

We’re back! And for all my loyal scribble readers, I got a story for you. As some of you might remember, Ms. Sue and I have been “road trippin’”. Even did a little honeymoonin’ at the same time, only truckah style. Let me start by tellin’ all how we got started last Wednesday. See, I had a couple things to finish up at the office. With all vacations, there are last-minute details that come up. I, like a typical man, had left the packing to my lovely bride, and she was putting things away in the motor home after provisioning up.

So I’m headed to the house and I get a phone call. It’s Ms. Sue. “Hello,” I answered. “Honey, there’s a bird in the motor home!” I hear in a very excited voice. “There is?” I replied. “Yes, and I need you to come catch it!” Well, I had to chuckle, but being only a minute away, “I’ll be right there,” I replied.

So I pull into the yard and into the coach I go to find Ms. Sue, armed with a dustpan, trying to keep an eye on the bird, a little sparrow. “Right there,” she says. So I grab some gloves and make a grab for the bird, only to come up with a handful of feathers. But on the second try, I got the little fellow and released him into the wild. Not sure how he was navigatin’, as he only had about one tail feather left!

So we finished up and off we went, and as we passed Mike’s Place, I turned the air conditioner on, only to get a bunch of feathers coming out of the vents! We both laughed and figured it was as good a start to a trip as one could have!

As we made our way west, toward Highland, Mich., I was able to educate Ms. Sue on all the different styles of trucks and trailers on the road. So if you catch her around somewhere you might ask her the difference between a low-boy trailer and a stepdeck, or maybe even what a removable gooseneck trailer is, an RGN for short! And I’ll give her tons of credit, because most women probably wouldn’t know or care what the difference between a crane mat or a blasting mat is! But like the lovely wife she is, she listened to me ramble on and even asked questions.

Our first stop was Niagara Falls. Very romantic, one might think, but at 10 in the morning, pouring rain, it really wasn’t our cup of tea, so we didn’t stay long. I did wonder what makes somebody wanna go over a river falls in a barrel, with a chance to die, which six people have!

Anyways, Friday morning found us pulling into Cleveland, which I was super excited about, as we were going to the Rock & Roll Hall of Fame! Now, being someone who grew up in the ’60s and ’70s, the heyday of great music (in my opinion, of course), I was mesmerized at all the nostalgia that was on display, from Hendrix to Clapton, the Beatles, the Stones, and, of course, the “King,” Elvis, and so many more. I felt like I was a kid again. Awesome stuff! Now, I’m thinkin’, how can it be any better than this? Well, there’s more.

We got out of Cleveland early afternoon, headed for Ms. Sue’s brother Dan’s house in Highland, Mich., about an hour northwest of Detroit. It is about a 3 1/2-hour drive from Cleveland. Ms. Suzie had never visited with him before out here, so she was excited to not only see him, but also his lovely wife, Emily, and their two sons, Billy, a freshman in high school, and Danny Jr., an eighth grader. Being kinda new to the family, I had met all before, but hadn’t spent a lot of time with any of them.

Now here’s where it gets super good. Upon backing the coach into the parking area, across from their house, we look up and here comes the welcoming committee: Mom and Dad, along with the labradoodle, Logan, and one of the boys, Danny, who immediately reaches out to shake my hand and greet us! He asks about our bags and whether we need any help carrying anything! Soon big brother Bill, who is fighting the allergy thing, joins us. It’s not 10 minutes into our three-day visit and I feel like I’ve known these folks forever.

In another life, I did a lot of youth coaching. Memories of teams that I coached came back. It is never the wins and losses that you remember, but the faces and exuberance that young men exhibited upon reaching a goal. Meeting these two young men brought me back to that place a long time ago. Listening to Danny, who had to be coaxed by his mom to show me all the trophies and medals he has won in track and wrestling, I could feel his humility and see his pride. And shooting baskets with Billy reminded me of the hours my own son and I spent shooting hoops.

I was so impressed by these two young men. Mom never had to tell them to clean the dishes or take out the trash. When somebody needed something, they were all over it! I can’t tell you how many times I was asked, “Uncle Larry, need anything?”

The best of it all was when I asked Billy if he wanted to learn to play a little guitar. He did, and after a few pointers from a “wannabe,” he took to it like a duck to water. Ahh, youth and the young brain! I felt bad even taking my guitar back on the road with me when we left.

I’ll continue next week with our adventure coming home through Canada … but what we were treated to a couple of days after arriving home was a text with a picture of a great kid with a brand-new guitar and a big smile! Till next week…