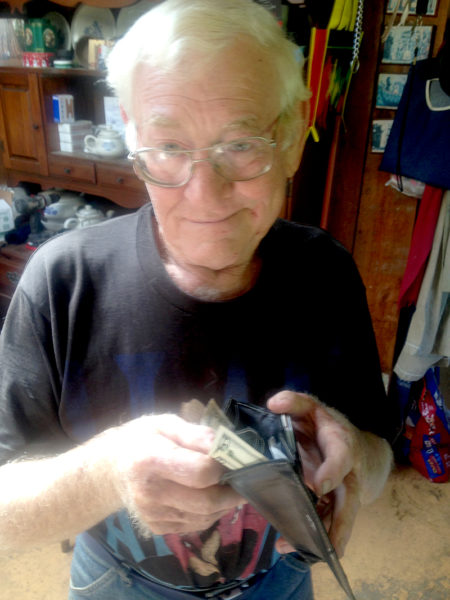 There is nothing of value behind our paper money, writes Doug Wright. (Photo courtesy Doug Wright)

I have been amazed at how many folks have asked me: did I get the water back? The water came back quickly. Since I wrote last week about losing the suction, I have discovered what really happened. Robin was mowing and asked my nephew to move the hose. He gave it a yank and flipped it out of the way. But no one could see down in the bushes where the hose joint was pulled apart, thus running freely till the water went below the end of the intake pipe. I poured a lot of water for nothing until I discovered it.

I have been wanting to share with you who don’t get to listen to talk radio some interesting facts revealed by former government employees. My longtime readers know that I write best about everyday things. I like to share the goings-on of everyday life. I like to make comments of various sorts: sarcastic, snotty, praising, and so forth. But I tell truth as I see it. This is not always popular; I get arguments too.

But here is something I have wanted to share with you. We don’t have TV. We listen to talk radio, including public radio. I have heard that there are long-term plans to convert us all to one world government. There is apparently a cabal of slick high officials in the U.S. and other governments who, in league with the richest and most powerful industrialists in the world, are maneuvering the people into accepting the abandonment of our traditional way of life.

One of the tactics is to accustom the population to having a militarized police force.  For the last five years, there has been a program where all over the country there have been simulated police takeovers of large cities. This is to prepare for the civil uprisings that are going to occur as this cabal succeeds in devaluing our dollar into nothing. In fact, we are already there. There is nothing of value behind our paper money.

It has also been speculated that our loyal young soldiers are being kept overseas so they can’t side with the people against the militarized police when the crash comes. The events of this last week bring this chillingly close.

Just stop and think about it. We are bankrupt now. The solution by the cabal will be to defund Medicare and drastically cut Social Security benefits. Now, folks don’t want to hear this. Old folks get heartthrobs when thinking about meddling with Social Security.

Another thing that is very hard to accept is the fact that our present era of “prosperity” is skidding along on borrowed money. Our grandchildren will still be paying off this bill when we are long gone. It won’t come to that, though, for we are going to have a colossal crash of the financial system. There will be riots, police outside the banks, and so forth. It is time to admit how wrong this is to live on the backs of our descendants.

There is not much as individuals that we can do – maybe get our money out of the bank while we can. I have read and studied and I can’t see any way out except disaster. Pull in our horns and dig in. I know most will throw down the paper and move on, what else?

I am dying to read the response letter that will be written by my cousin the banker: Rick Newell. Maybe Sheriff Todd Brackett too.