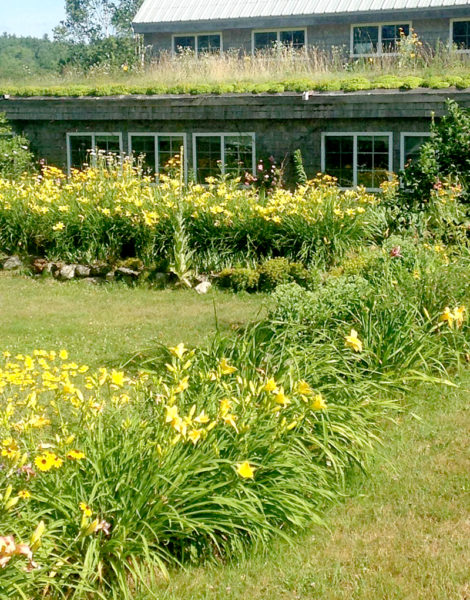 The church flower beds are in full bloom despite the dry summer. (Photo courtesy Doug Wright)

The news this morning contains accounts of folks settling their disputes in very bad ways. There is the story of the woman in Brewer who had a fight with her man, got in her car, chased him onto the sidewalk, struck him, and then drove off. She is in jail.

There is another story of an elderly man hauling out a knife and stabbing his companion in the neck with it. This is here in Maine! In other places folks have been assaulted at parties and bombed with a body bomb carried by some kook.

Safety these days is a debatable thing. We have several guns, Robin is a highly trained martial arts expert, and I feel fairly secure, but one never knows when I might annoy someone in my column and they might come and confront me. Whatever. I tell it like I see it.

I thought I would send a photo of the church flower beds, which are in full bloom despite the lack of water. By the way, I pumped dry the spring, ran a hose down to our garden from the church, and promptly pumped the artesian well dry as well. It has come back. But folks, we still have August and September to get through. I fell asleep last night happily listening to the rain. But this morning my water glass that I put out to catch it only had a miserable half-inch of water.

Still, my flowers are doing well; they catch and suck up the dew to survive. There is no water in the ground, as it is quite dry way down deep, yet the flowers grow on. It’s my good soil, augmented with lots of compost and mulch. I also bought 20 bales of hay and spread it 6 inches deep over my greenhouse soil and the entire garden too. This helps grab whatever water does fall.

I save most water for my medical plants which are now taller than I am and bushing out like crazy. The greenhouse will soon be a jungle. Folks going to the swimming hole call out: “sure smells good!”

Patchy Dog has been suffering from the zillion fleas that are around here. I think the dryness has increased the fleas attacking anything with warm blood. Listening to him chew and scratch in the night finally drove me to giving him a super sudsy flea bath. Good for a few days.

I have discovered from Robin that if you bathe a dog with high-quality olive oil it will smother the fleas. I know it sounds awful, but seeing the dead fleas is very satisfying, and within hours the dog’s body absorbs the excess olive oil and the dog looks good. Got to hook him out a few hours though.

Still the fleas came back, after all the lawn is jumping with them, so I finally went to the vet and got a $24 bottle of flea medicine. After four days with no fleas, his belly and the inside of his legs are no longer red and itchy. The vet says it’s good for three weeks. Going to get expensive till cold weather.

By the way, the talk radio folks say that July 29 is the day the world economy is rigged to collapse. Wonder if I’ll be here next week?