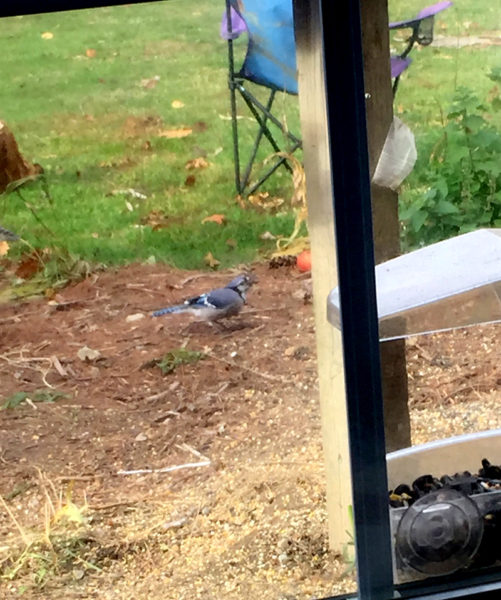 It has been an interesting morning having my coffee while listening to the morning news on the radio and at the same time listening to Robin battle with the blue jays. He is convinced that they are complete hogs and carry off vast amounts of birdseed, so he has taken to running them off however possible.

The first line is yells and curses from his chair looking out at the feeder. Robin is a former logger and big rig driver and has a vast repertory of bad language which he turns loose on the birds. They totally ignore him. Next is opening the window and getting out his foam rubber dart gun. Can’t hurt. He is an excellent shot by the way.

He took his daughter out with him hunting the first day. He placed her in his spot and then took a walk and within 20 minutes shot his nice buck. He has shot a buck within the first hour of his hunting every year since he has been here. It is hanging in the front hall of the church right behind my office door here. Patchy is lying on the couch with his nose pointed toward the door.

Robin and his daughter saw a very large wolf as big as a small deer. He was momentarily afraid for their safety.

Now wouldn’t you know? The ante is upped as five gray squirrels have fixed their sights on our sunflower seeds. Out comes the BB gun, cuss shout and bang! More like pop. But they get the idea.

Now the other battle, which is going to be nearly unavoidable, is the pushing and shoving, elbowing, and jabbing at motives, character, and personalities of our current polical hopefuls.

It has been a long time that I have taken in the political battles. I watched the conventions beginning when I was a little kid, because it was the only thing on the TV, that’s why. I have heard oh, he can do it, but doesn’t say what. I have heard: she has her finger on the rocket buttons and will use them. I don’t know what to think. Too serious to be ignored though.

I was taught that it was the people through Congress that declared war: the ones who are going to have to supply the fighters, not the ones who are picking the fights to enhance their political careers. I am pretty sure I am correct. And I think we have allowed the powers we have failed to guard and cherish to be taken slowly over by “those who know best.” We have grown up a nation of ignorant, lazy civic clods who can’t be bothered with town meeting and making change through the process provided by law. Harsh am I?

I would like to hear some original ideas as to how to get good jobs back to the Maine workforce, which is the best in the nation I am confident in saying! But Maine workers can’t support their families on the wages of Chinese workers, their competition.