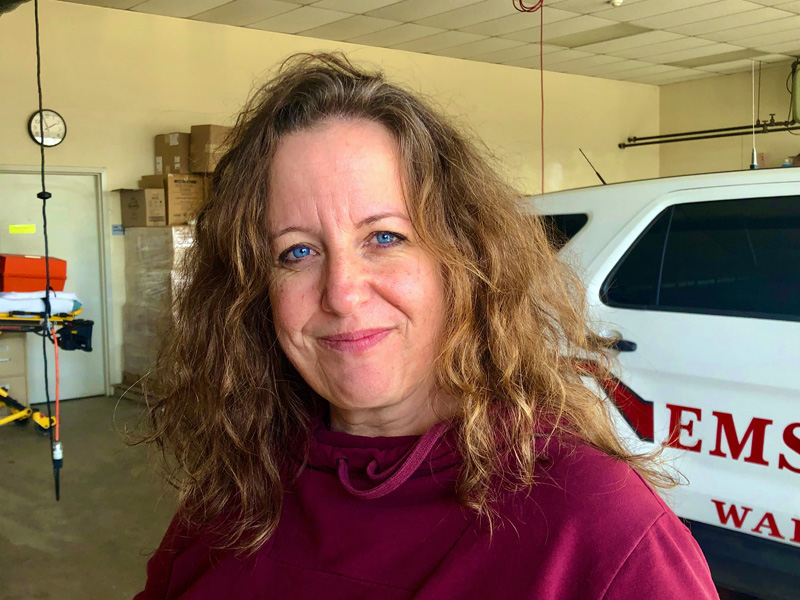 Karen-Ann Hagar-Smith stands in the garage of the Waldoboro Town Hall, Feb. 23. She says, “This, the town hall, is the place in Waldoboro that makes me the happiest. It’s my refuge, my place of safety. It’s where I feel loved and supported with every crazy, sad, challenging or fun day.” (Photo courtesy Rebecca Cooney)

(Editor’s note: “Waldoboro Voices” is a new column by Waldoboro resident Rebecca Cooney. She will be interviewing the town’s public servants, interesting community members, and other people with a village story – or two – to tell. The style of the column is different from other columns in The Lincoln County News. Rebecca will transcribe her interviews so readers can hear the voice of the subject in their own words.)

Karen-Ann Hagar-Smith has been Waldoboro’s community navigator since 2020. For three days a week, she lends a hand to people in Waldoboro – finding housing after a fire, food for a hungry family, funds to pay a utility bill, a place inside rehab to recover after hitting bottom. As Karen-Ann puts it, “It’s part of my own recovery – paying it forward.”

The rest of the time she works for the Central Lincoln County YMCA as director of outreach and community navigation serving nine other towns. When we met, she was radiant. She had quietly married the day before, though I didn’t know so at the time. She is 50 with two adult daughters and lives in Damariscotta with her new family.

“My father committed suicide when I was 12 and between that day until I turned 24, I was a broken little girl who was very angry.

“My brothers were grown – even my next sibling was seven years older. And my mom was a workaholic because she was trying to keep our home going. And when she wasn’t working, she was escaping with friends. It was how she coped. My oldest brother took over and I love him for that. But he had his own family plus my father’s business to run with my mom. So I was alone a lot. And I was a handful, pushing away anyone who came near, because I didn’t think they could be there for me.

“But in the middle of all that, I had a vice principal at Lincoln Academy, Mr. Boynton. Being from Nobleboro, he knew my story. He saw how broken I was, without any hope for myself. But he never shamed me. Even though we didn’t talk much, I spent a lot of time in his office. And he was there for me after I left Lincoln Academy, too. He visited when I was 19 in a rehab psychiatric unit. They were rough years. But he never gave up on me.

“He saw me get free and come out the other side. When I dove right into helping other people, he was super proud. I was just doing what he did for me.

“So here’s the rest of my story. In 2017, one of my brothers took his own life. Then in September 2018, my mom died. And a few months later, in December, a second brother took his life. And two weeks after that, my brother’s daughter.

“I was destroyed. My brain wouldn’t work. I could barely move. But this time I allowed people in, to love and help me. People took turns spending the night with me. Others left random bags of groceries. And gas cards. Even laundry cards. I will never forget it, people’s kindness. I am blessed.

“I have a job where I can give my thanks every day, doing what I am good at – making phone calls on behalf of others, connecting people to the right resources. Like the man a neighbor calls about, maybe he has no heat or he’s not eating, I can get boxes of food delivered or find the funds to get him heating.

“My biggest challenge is housing. Finding it and keeping people safe in their home. Because of COVID, homeowners selling in a good market. But what about the people who were renting from them? They could hardly pay their bills before. And now they have to find another place. Where are they going to go?

“Then there are landlords who take advantage of tenants. Like renting garages, and that’s happening in Waldoboro, with a bare cement floor and maybe no bathroom or heat. Or landlords who don’t make repairs, like an apartment where every time you turn on the faucet, you get zapped. And if you’re already hungry and barely managing, you’re not going to risk complaining.

“But the ones that get me the maddest are landlords who close their eyes to bad behavior – like selling drugs or partying all night bringing into the building strange people, when there are other tenants in the building who might be elderly or have little kids. But you won’t call the police because they might pay for it. And they’re scared anyway.

“So it’s weird I have so much hope. But I think change is possible. Everyone in this town hall, we solve problems. We are a team. If I get a call about someone living in a shed, I’ll call Stan Waltz (Waldoboro’s code enforcement officer) and we’ll talk about what we can do. Maybe the landlord is also trying to make ends meet, so then the question is, what can we do for the landlord? There are resources everywhere. It’s my job to find them.

“Most people come to me about being hungry or the bills they can’t meet. But it’s only the tip of what’s going on. But they’d never say so. They’re proud. I understand. They don’t want to ask for help. So I meet people where they are. Maybe it turns out it’s a child who is depressed. I can work with the school to get counseling. Maybe it’s someone with a drug addiction that everyone else had given up on. I can find a good long-term silver sober house and get her admitted. Maybe it’s someone who can’t be there for her children. I can get her kids into a program at the YMCA so they’re engaged and with healthy adults. It’s what my mom did. She put people in my life to watch over me. Like Mr. Boynton.