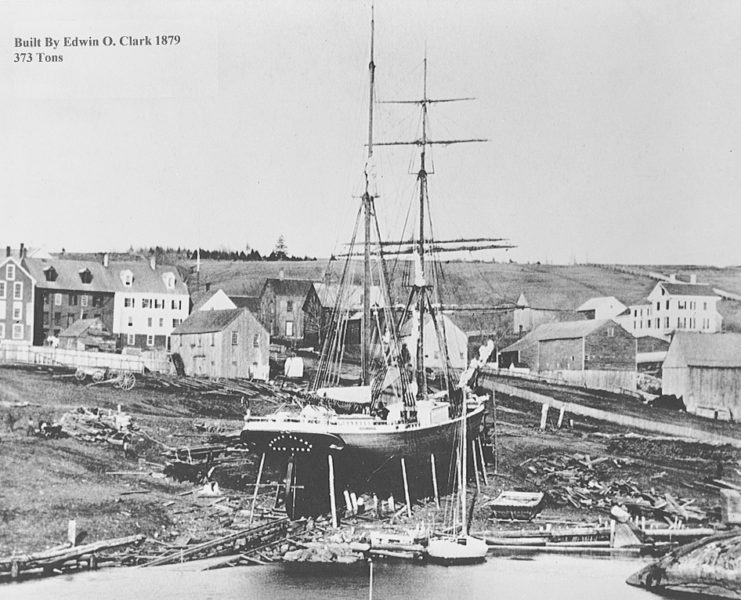 Joseph Clark, the great Waldoboro shipbuilder, major employer, and wealthiest resident, died suddenly of heart failure July 19, 1875. A large number of people were in attendance at the funeral for which businesses were closed, work in the town suspended, and flags upon buildings and ships displayed at half mast. Although his death was deemed an irreparable loss to the community, the town was fortunate to have Mr. Clark’s very capable son, Edwin O. Clark, to carry on the many family enterprises.

Edwin O. Clark soon launched the first of five vessels built completely under his name. This was the 1,661-ton ship Mabel Clark, named for his daughter. The Lincoln County News, as was its wont, kept and reported her progress as she was being built:

“Aug. 9 – Captain O.D. Sheldon of Philadelphia is to command and part own the new ship.

“Sept. 20 – The Davids brothers, of Damariscotta, are preparing the rigging for E.O. Clark’s new ship.

“Sept. 27 – Plankers have ‘shut in’ on Clark’s ship, which is expected to be launched next Thursday.

“Oct. 4 – Clark’s ship to be launched next Monday.

“Oct. 11, 1877 – The launch of the Mabel Clark took place Monday at the Clark yard. She was 201 feet by 40 feet by 24 feet, and her tonnage was 1,661. Her steering mechanism is the most modern type and was built in the James Boyd Iron Foundry here in Waldoboro; her spacious 50-foot cabin displays the following woods: mahogany, black walnut, birdseye maple, California laurel, black walnut burl, mountain ash, satin wood, and California cottonwood. A tug towed the vessel to Hollis Point where she will be fitted for sea. After rigging and fitting are completed, she will probably proceed to New York and take grain freight for Europe. Mr. Daniel Hitchcock will ship as First Mate.

“Oct. 25 – The Mabel Clark, nearly ready for sea, invited a party of ladies and gentlemen on board. The company embarked from Clark’s Wharf and were rowed to David Point where the ship was anchored. The guests inspected the vessel and enjoyed a sumptuous meal at 2 p.m. in the spacious and elegant cabin. After another hour of quiet enjoyment, they took to the boats again and returned to the village at 6 p.m. Loudly praising Mr. Clark, Captain Sheldon, and Mate Hitchcock for their urbanity and kindness in answering questions and affording the party every means of having a downright good time.

“Nov. 1 – The ship Mabel Clark left her anchorage at sunrise yesterday and was towed to sea by the steam tug Knickerbocker, of Bath. The ship goes to Norfolk, Va., where she will load cotton for Liverpool.

A crew of 12 men and a cook arrived in a coach from Rockland; they were furnished by William Wilson, shipping agent at 140 Commercial St., Boston, and are said to be a superior crew.