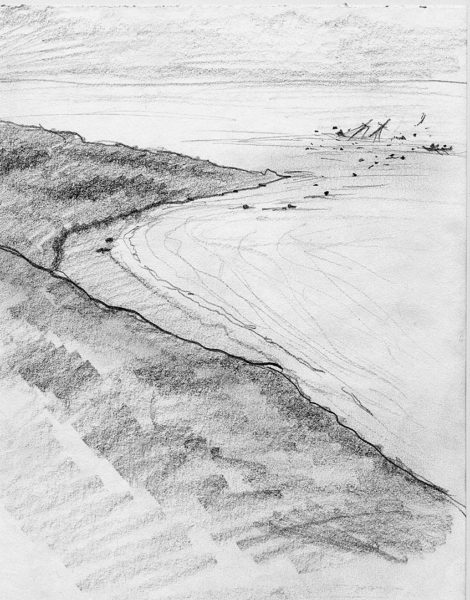 Of the ship Mabel Clark: “On the day the storm subsided, eventually, all remaining members of the ship’s crew were rescued and brought to land.” (Sketch courtesy Thomas D. Turlo)

In the midst of a scorching heat wave in July of 1878, The Lincoln County News published the first in a series of reports concerning the ship Mabel Clark, launched the previous October and on her maiden voyage:

The ship Mabel Clark, with Capt. O.D. Sheldon, from Liverpool, headed  March 9 for Hong Kong with a load of coal was lost in latitude 37 degrees south and longitude 12 degrees west. Part of the crew was saved — no data given as yet. Later advisories say she went ashore at Tristan da Cunha, an island west of the Cape of Good Hope.

The Mabel Clark was well-insured and one of the best vessels ever built in these parts. The mate, second mate, and carpenter were from Damariscotta. We do not yet know who of the crew was saved.

Reports continued to come in sporadically regarding the loss of the Mabel Clark only five months after her Waldoboro launching.

Aug. 8, 1878: There are two versions about the wreck; one says that six seamen were lost, and that 15, besides Capt. Sheldon, his wife, and their child, were saved. The other version says that all crew members were saved.

Sept. 30, 1878: A letter has arrived from the first mate, Daniel Hitchcock, of Damariscotta. In it he describes a horrifying experience:

“When we struck the reef in that night of intense darkness, it was about 2 a.m. The sea was very high, and when daylight finally came, we could see the natives on the shore unable to reach us because of the immense waves. All day we waited as the storm continued. At 2 p.m., I concluded that my chances would be better if I swam for shore. Exhausted and with a damaged shoulder, I was just barely able to make it.

“Capt. Sheldon, William Hitchcock, and five other seamen followed my example; some were successful, but William and another man were dashed onto the rocks and perished. Those who did struggle ashore were helped by a native who swam out with a rope tied to him, took seamen in his arms, and swam back. The rest of the crew remained on the ship, which stuck on a reef about one-eighth of a mile from shore.

“Most climbed into the rigging to save themselves, but some were washed over the side and drowned. Mrs. Sheldon, tied to the mainmast, did not budge from her perch for 34 hours; her little 10-year-old daughter had been wrapped in a rubber coat and held tightly by one of the stronger men. Once she was wrenched from his grasp for an instant, but her hair caught in one of the large blocks; he was able to lash her to a mizzen top. (She survived the ordeal unharmed except for two broken teeth.)

“On the third day, the storm subsided; eventually, all crew members on the ship were rescued and brought to land. We all remained on that tiny island for the next 49 days. Then the captain, his family, and the other officers were taken to Singapore via the ship Maulesden. The remaining crew members stayed on the island with the 94 permanent inhabitants, grateful to be alive. Later they were transported to the Cape of Good Hope, from which they will make their way home by October, it is hoped!”

Oct. 17, 1878, from The Lincoln County News: “Mr. Daniel Hitchcock is safely home in Damariscotta. He has had his shoulder set in Boston and is recuperating at his house.

“Capt. Sheldon has arrived in Waldoboro and confirms the mate’s account of the tragedy.

“Mr. Edwin O. Clark has commenced work on his new vessel, a brig for Capt. Stahl.”

About a year had passed since the happy launching of the Mabel Clark.