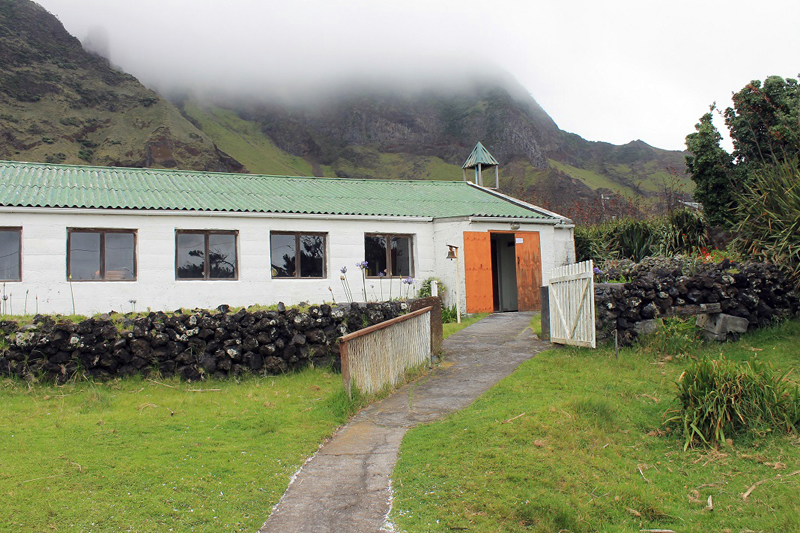 Tristan da Cunha, the small island in a group of three in the South Atlantic where the Waldoboro vessel Mabel Clark was wrecked in May of 1878 is still the most remote inhabited place in the world. Discovered for the first time in 1588 by a Portuguese captain, the island, lying between Cape Horn and the Cape of Good Hope, has been claimed at one time or another by the United States, France, Holland, and, since 1817, the United Kingdom.

At the time the Mabel Clark went ashore, the population of the island amounted to about 100; today, it is close to 300. All inhabitants live in the one flat plain where the capital, Edinburgh of the Seven Seas, lies. As always, the people rely upon farming, collecting albatross and penguin eggs, and some fishing for lobsters and crayfish for their livelihoods. There have never been government laws. There was no money system until after World War II. The first divorce recorded came about in 2003.

For many years, there was no alcohol allowed. From a video I watched, this may not still be true. The people are, overall, content and happy; when the resident volcano at the center of the island erupted in 1961, everyone was removed to England. In two years, nearly everyone returned, fed up with noisy traffic, busy streets, and savage winters. Having said all this, Tristan da Cunha is no place for a vacation: no airport, credit cards not accepted, one paved road, unsafe beaches for swimming, and every month — including May when the Waldoboro vessel arrived — there are 17-26 days of rain. 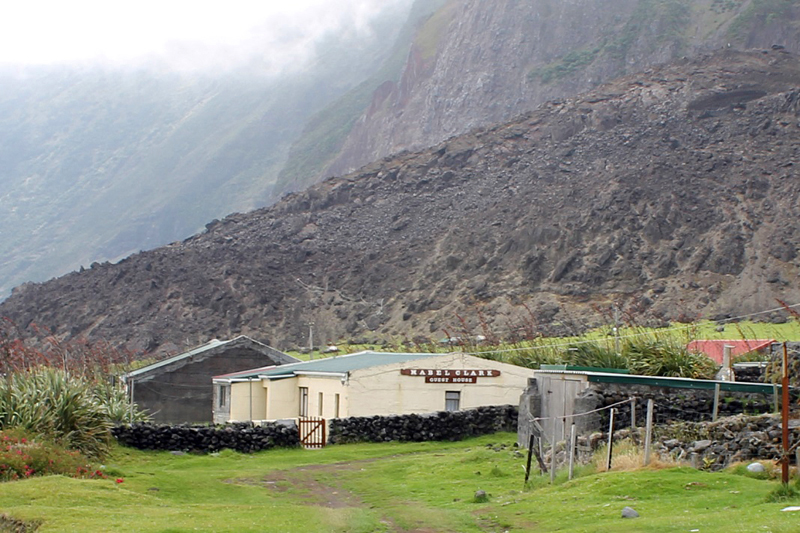 The Mabel Clark name board hangs from the outside wall of the guest house. (Photo courtesy Peter Millington)

“Isolation” is the word for the visitor. There is a grocery store, but orders must be placed months in advance, and getting goods ashore from boats may be delayed. There is a hospital — one doctor and five nurses — with some modern equipment, but more specialized care must be received in South Africa, 1,500 miles away, or in the U.K. The nearest inhabited island is 1,200 miles north, St. Helena, where Emperor Napoleon Bonaparte was imprisoned for life. 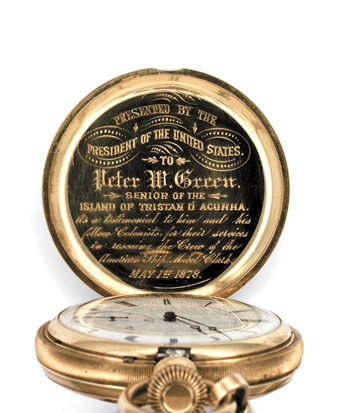 For our readers, however, it is wonderful to note that despite its continued isolation in the world, these 300 English-speaking islanders have memories of the Mabel Clark tragedy, and Waldoboro and can experience them any day.

Shortly after the experience of attempting to rescue the sailors from the stricken ship and the pounding surf, their bravery was recognized by U.S. President Rutherford B. Hayes. Senior islander Peter Green was presented with an engraved gold pocket watch, which still exists. Capt. Oscar Sheldon, his wife, his daughter, and 15 of the 21 seamen (six had been lost in the storm) were cared for in island homes and eventually made their way home by way of the Cape of Good Hope. When it became possible to approach the wreck after the storm, many timbers were taken and used for the building of cottages. The ship’s name board to this day adorns one of the guest homes, and the ship’s bell is still in use at St. Mary’s Church. The Tristan da Cunha post office workers, headed up by Miss Iris Green and the island archive keeper, Dawn Repetto, are currently working on a set of postage stamps to commemorate the wreck. Waldoboro history lives happily and well far, far from home.