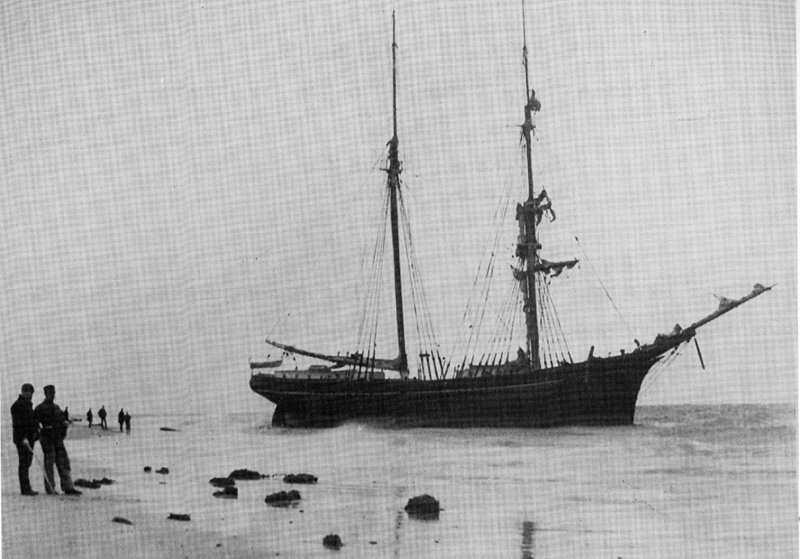 Brigs like the “Emily T. Sheldon” were constructed in one of Waldoboro’s 16 shipyards in the early 1900s.

Waldoboro is justly famous for its giant vessels — from the 1,689-ton “Governor Ames,” built in 1888 by Levitt Storer, to the six palmer schooners built between 1900 and 1904 by George Welt. While these vessels are well-known, others that are less renowned are the hundreds of smaller craft — schooners, brigs, barks, and barkentines — that were also constructed in the 16 shipyards of our village.

Most of these smaller vessels were used for the coastal trade, which went as far south as Latin America, carrying a variety of cargo out of Maine and returning with different cargo to sell. These little vessels were like the pickup and the trailer trucks of the time, when travel on water was much easier and quicker than travel on land.

The Maine Maritime Museum has some of the logs and journals kept by the skippers of these coasters, and among them is one kept by Captain Nathaniel G. Groton, of Waldoboro. Captain Groton was the nephew of James R. Groton (pronounced “Growton”) who was a local storekeeper and a shipbuilder on the west side of the Medomak. He took command of the brig “Times” — 147 tons, built by James Groton in 1847 — in May of 1849 as she coasted from New York to Waldoboro and thence from Waldoboro to Philadelphia, back to Boston, then to Matanzas, Cuba, and finally arriving in Boston March 12, 1850.

For the readers of ships’ logs, most of the writings concern business matters only: the weather, direction and velocity of the wind, compass readings, the work carried out, unusual sights and happenings with the day being divided into three parts – “first,” “middle,” and “end.” The reading often becomes quite tedious. Captain Groton, however, often made things more interesting by injecting into his journal personal feelings: anger toward his uncle, homesickness for Waldoboro, and longing for a special someone.

Below are some samples of entries from Captain Groton’s journal.

“Wed., May 2, 1849 — Commences with light breezes from the north with fine pleasant weather. At 8 a.m. got underway with all sail and proceeded down the Bay. At 11a.m., passed Sandy Hook with light variable breezes at meridian (noon) wind east. And very moderate so ends off Sandy Hook.”

“Fri., June 22, 1849 — First part light variable breeze from the north, northeast with smoky weather. At 6:30 a.m. breezed up from southwest, squared yards, and set steering sails, at 9 passed Pemaquid Point, at meridian passed through lower narrows, and at 3 in the afternoon brought up in the mud one mile below town of Waldoboro.”

“Sun., July 15, 1849 — Commences with fine breezes from the north with fine pleasant weather. At 6:45 a.m. got underway from the wharf in Waldoboro and proceeded down the river with a strong breeze. At 8:40 shove off to Muscongus and put Capt. Kuhn and father ashore at 9 a.m. Took in the boat and squared the yards for sea. At 10 a.m. passed Pemaquid Point with the sails set to the breeze.”

“March 13, 1850 – Arrived in Boston and found [my uncle] J.R. Groton — the damned old miser — there with his pretty Sulena, read to sell the dear old ‘Times’ immediately upon his arrival, which he done, and may he never prosper! For so doing are the most earnest wishes of Nath. G. Groton.”

Author’s note: A most unhappy Captain Nathaniel Groton was now at the helm of a new vessel – the brig “Eliza Merithen,” bound from Boston to Matanzas, Cuba.

“I do not feel at home as I did aboard the old ‘Times’; then I looked ahead, but now it is for one short voyage and then leave. But I will leave no stain behind when I leave. Short voyage did I say? The hours are months to me. How glad I shall be when I am once more permitted to step my foot on the land that gave me birth and take by the hand those that are near and dear to me.

“Then I think I shall be happy for a little reason; alas, how frail is man cast upon life’s stormy billows, doomed to disappointment. For above me behold; the clear blue sky, beneath me the deep blue sea, around me a worthless crew, can I be happy under these circumstances and when the one that was most dear to me look upon me with a frown, as if I care not whether you go. We parted. But time does not forget love, nor will it ever. Nothing remains.”

“At Matanzas, Cuba — Discharged cargo and molasses. Mate very disobedient and negligent of duty. Took off casks. Preparing to leave for Boston.”

“May 26, 1850 Latitude 27 N; Longitude 74 W — Hot and sultry is this day, Sunday; very little wind to disturb the smooth waters of the great deep, and slowly passes this day. I read until I get tired, and now what shall I do to pass away a few hours? I write a little. I have no one to converse with, and room for walking on deck is very limited. How sorry I am that I did not take the advice of one that is dear to me and stay home this summer. How much happier I should have been at this time if I had, but the mind is like the troubled ocean, never at rest. And now do I repent and suffer for so doing. Not in body do I suffer, but in mind, in the silent watches of the mind, calm night that breathe thought. There on the deck I stand and cast a wistful eye, and think of the past, for many things to repent of, and am sorry for. But so be it, such is life — a checkerboard.”